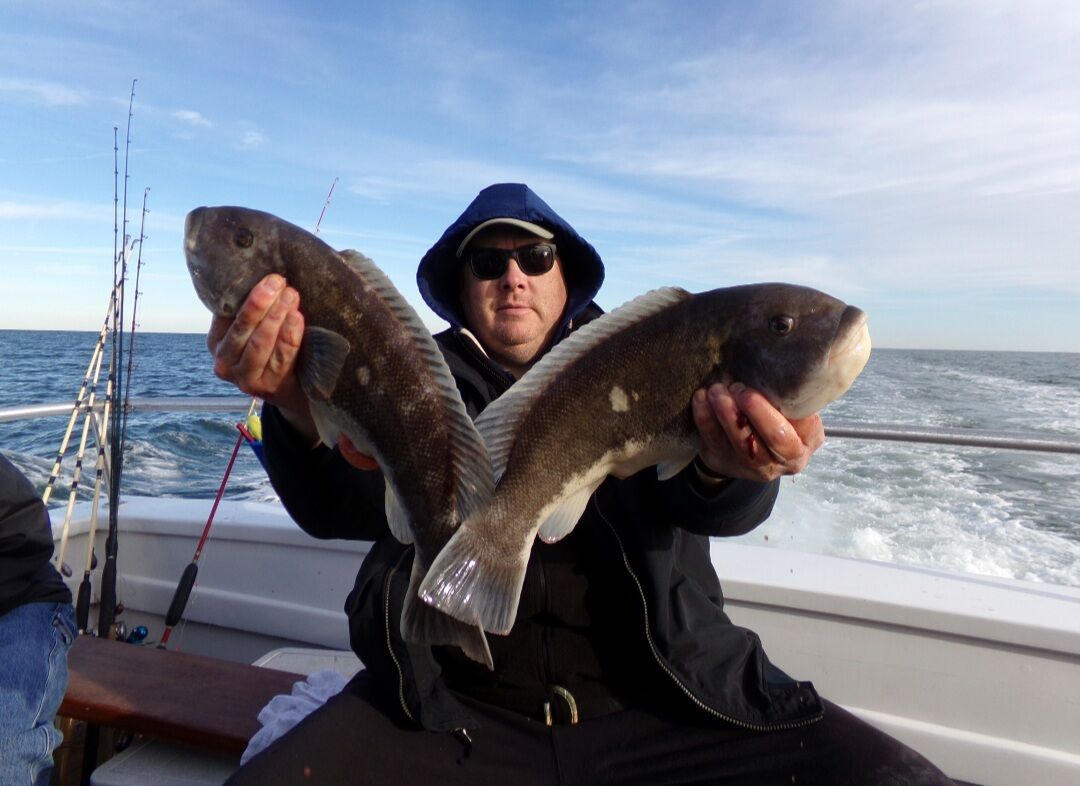 Two nice blackfish for this angler. 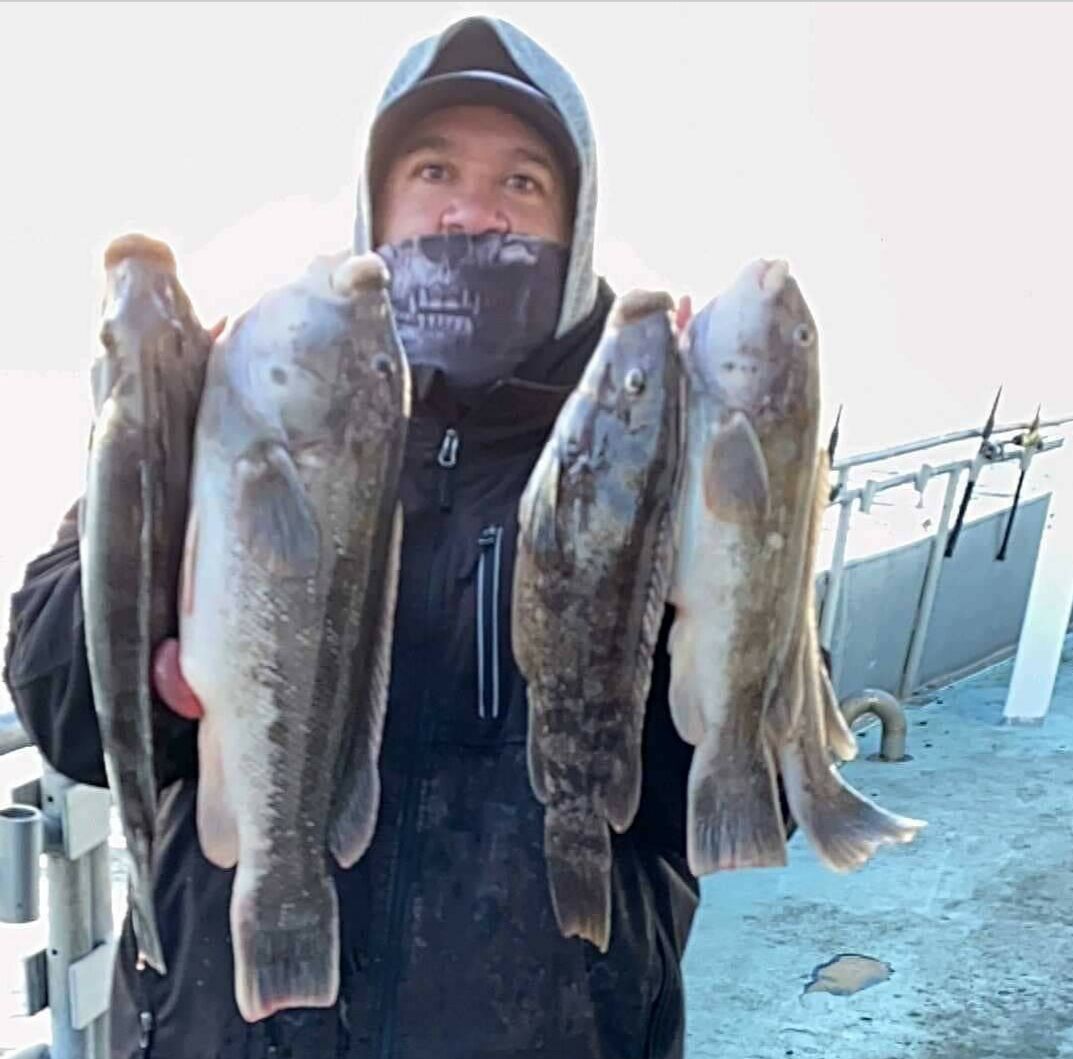 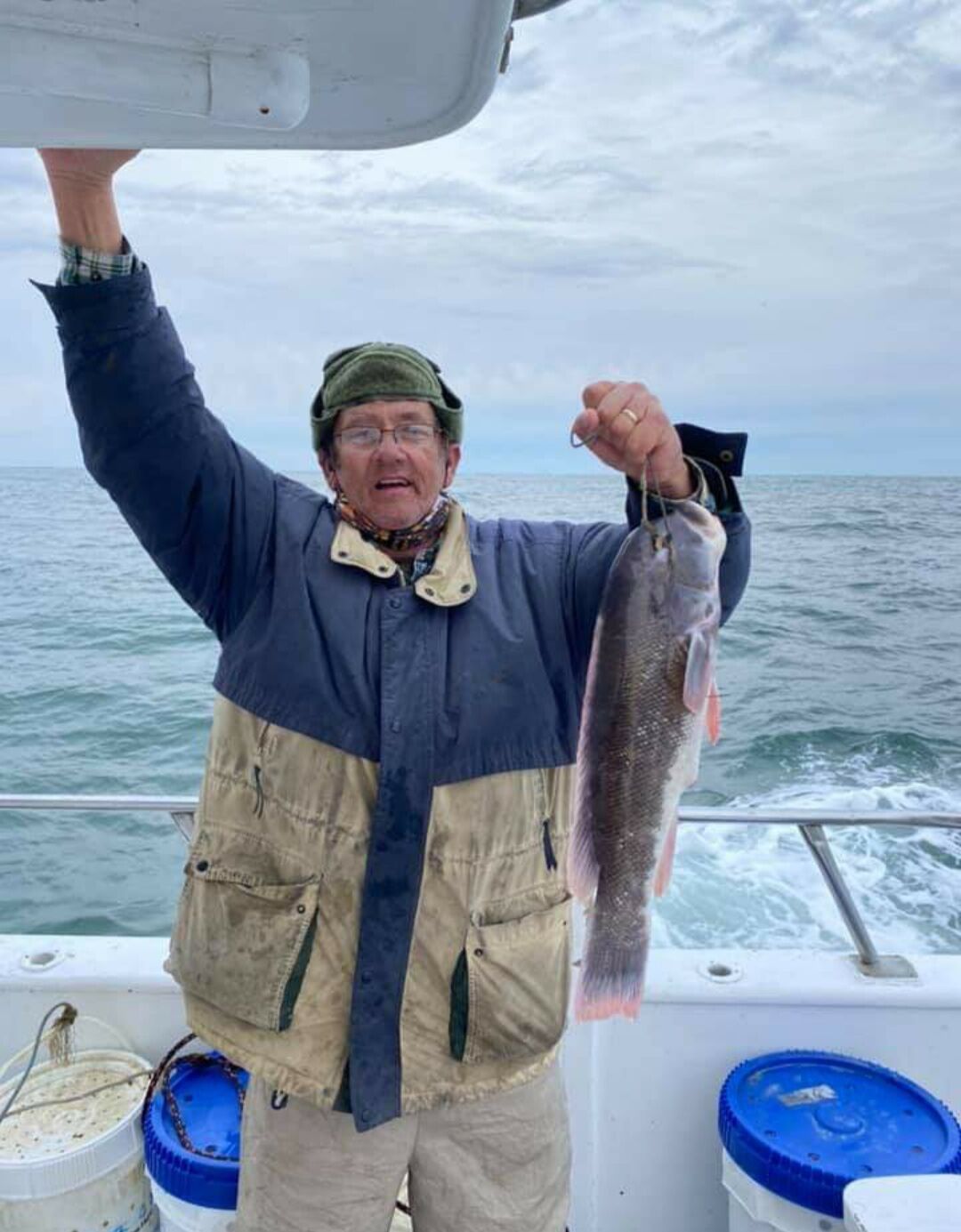 Lance and his 6.1-pound, pool-winning blackfish. 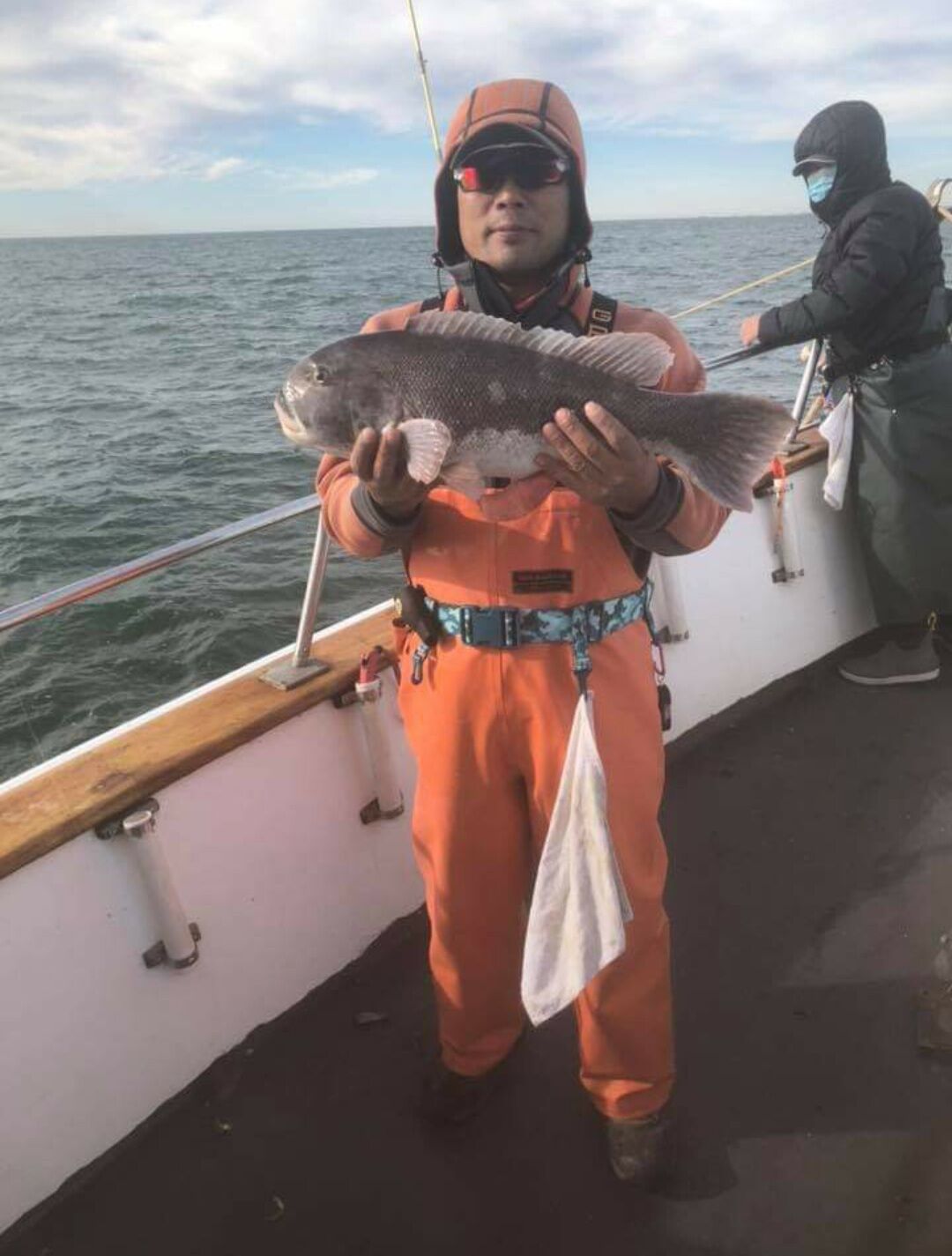 Mr. Young and his pool-winning blackfish.

It was another week of give and take.

The weather gave us a few fishing days before it took more chances away. Even with that scenario, some excellent fishing trips set sail. If the wind cooperates and lays down for an extended period, we should be able to experience some more quality fishing.

Blackfish and striped bass should dominate the final weeks of the season, but as of now, sea bass and triggerfish are also being caught. With those possibilities, you have the chance to come home with a nice mixed bag of fillets.

With most boats passing on heading out Dec. 6 while the wind whirled, the Starfish had the reefs and wrecks mostly to themselves. They represented themselves well with nice catches.

Before the early weekend foul weather, the Starfish was out Dec. 3 and had another productive outing. Limits went to Michael Christy and Paul Tomaski. Another trip had several anglers catching their limits during a day that was described as “great."

Fishing has been hot, so get in on the action. If you plan on taking a trip on the Starfish, you will need to book online, at starfishboats.com, or by calling Capt. John, at (609) 263-3800. Seating is limited.

The Miss Avalon, like others, didn’t get the number of trips in that they wanted, but that didn’t deter them from putting their patrons on fish. Limits were caught, and the recent highlight was the 6.1-pound blackfish that Lance landed.

As of this column, the season's remaining trips were dwindling to a precious few. A nice mid-week trip produced a boat limit of 60 keepers. Many shorts were added to the action on a day that was highlighted by a 6.46-pound pool winner. It was such a productive day that when the final drop was concluded, everyone could say they “left them biting," which is promising news for another day.

The Miss Avalon is offering gift certificates and long-sleeve T-shirts for holiday shopping. They have cotton and performance shirts, which come in gray, blue or tan.

Bayhound Charters Light Tackle Sportfishing reported a prolific blackfish trip for Charles Conroy, Tony DiBrino and crew. They returned with a boat limit that included two 8-pounders for Charles. The “crew” included a couple of anglers that were “fairly new” to this fishery but proved to be quick learners.

Capt. Al plans to fish as long as the weather allows. He also hinted that he could be convinced to go offshore for sea bass. If that sounds exciting, reach him, at (609) 602-2662, to schedule a trip.

The Porgy IV also did well, when given the opportunity. Limits went to Joe Zagorski, Joe Murray and Mr. Young. Included in Mr. Young’s catch was a daily pool fish, while Joe Lee, of Voorhees, claimed the pool on another trip. Sean Horner did well on a mid-week trip by catching four keepers. Top hooks went to Mike Youcis and Keith Cowan, who both limited out.

The Sea Star III didn’t get out as much as they wanted to, but they still caught nice blackfish and triggerfish, and keepers and shorts also kept them busy. They are planning on finishing strong and hope the elements cooperate as they enter their final week of sailing for the season.

As of this column, the Sea Star III finished their 2020 season this past weekend. Capt. Chuck thanks everyone and wishes them well. He also mentioned some available Christmas gifts, including gift certificates for fishing trips, T-shirts and hats.

The Miss Chris, the Sea Start III's marina mate, is also offering gift certificates for fishing trips. While there, you can also get certificates for stand-up paddleboard rentals, kayaking and back-bay tours. They have gifts to cover any outdoor adventure.

The Cape May Lady is sailing for blackfish as often as possible. They have been doing well, like the area's other boats, by producing nice fish. Contact them ahead of time to see when they will be sailing.

The Strathmere Fishing and Environmental Club recently announced the results of their Last Cast Tournament. It was held Nov. 27 and 28, the weather cooperated, and the participation in this annual catch-and-release outing was “very good."

Like others mentioned, various gift opportunities are available for the anglers on your Christmas list. Whether you call one of the boats or visit a local tackle shop, remember to try spending locally. The shop or boat may be closed for the season, but the owners can still be reached.

Fishing chances are lessening as the foul weather seems to visit us at least once a week. If you have at least half a chance, take it. The fishing is still great, so bundle up, throw on some long johns, and get out there.

Good luck, take care and I’ll see you around.