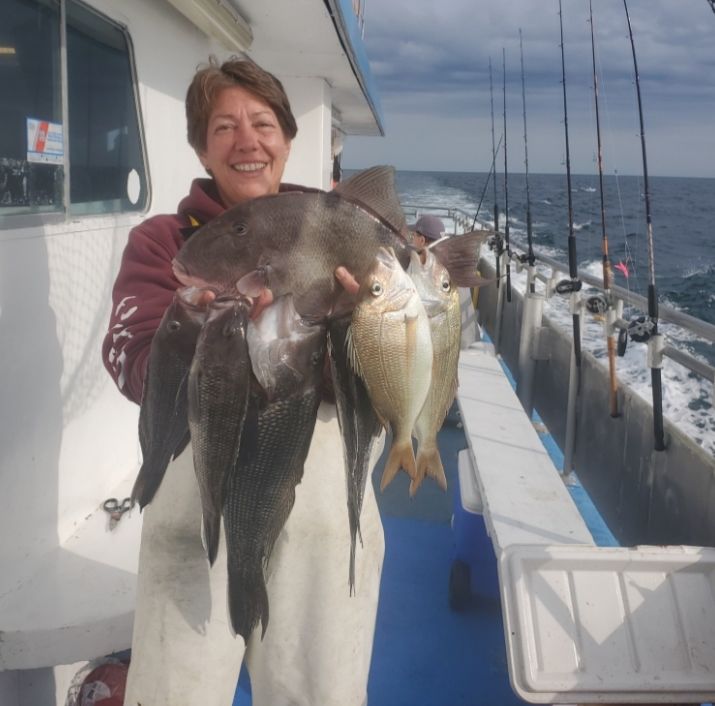 Ginna Sneathen with a nice mixed-bag, including the pool-winner. 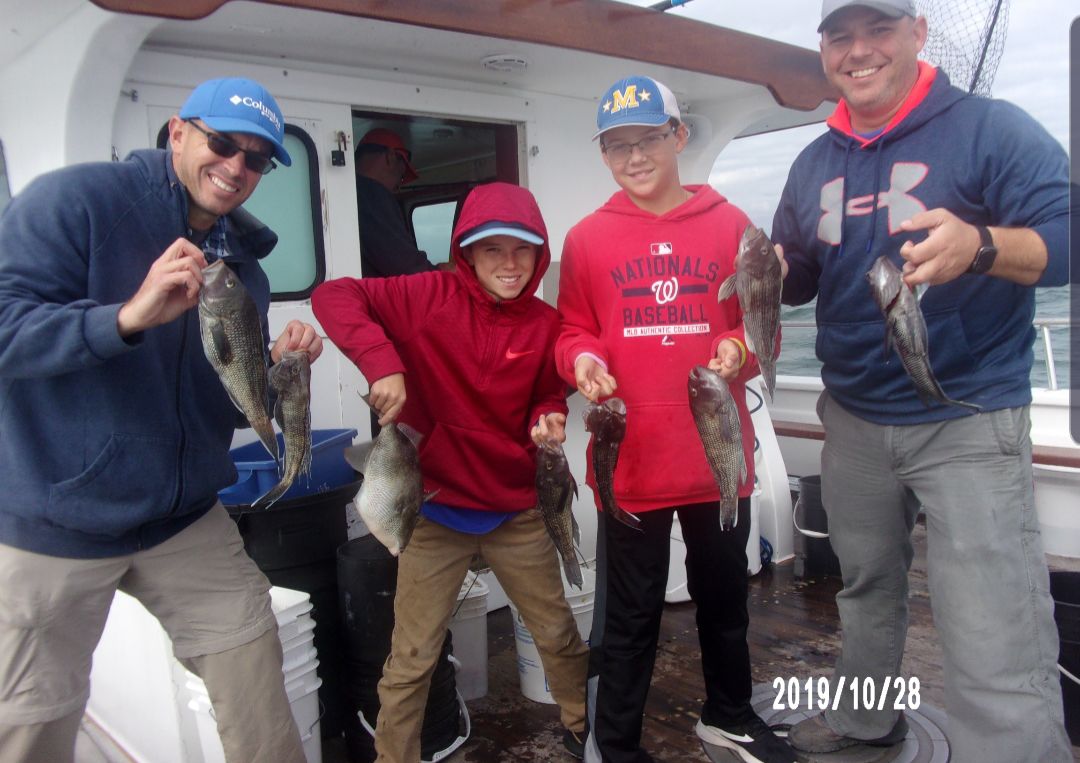 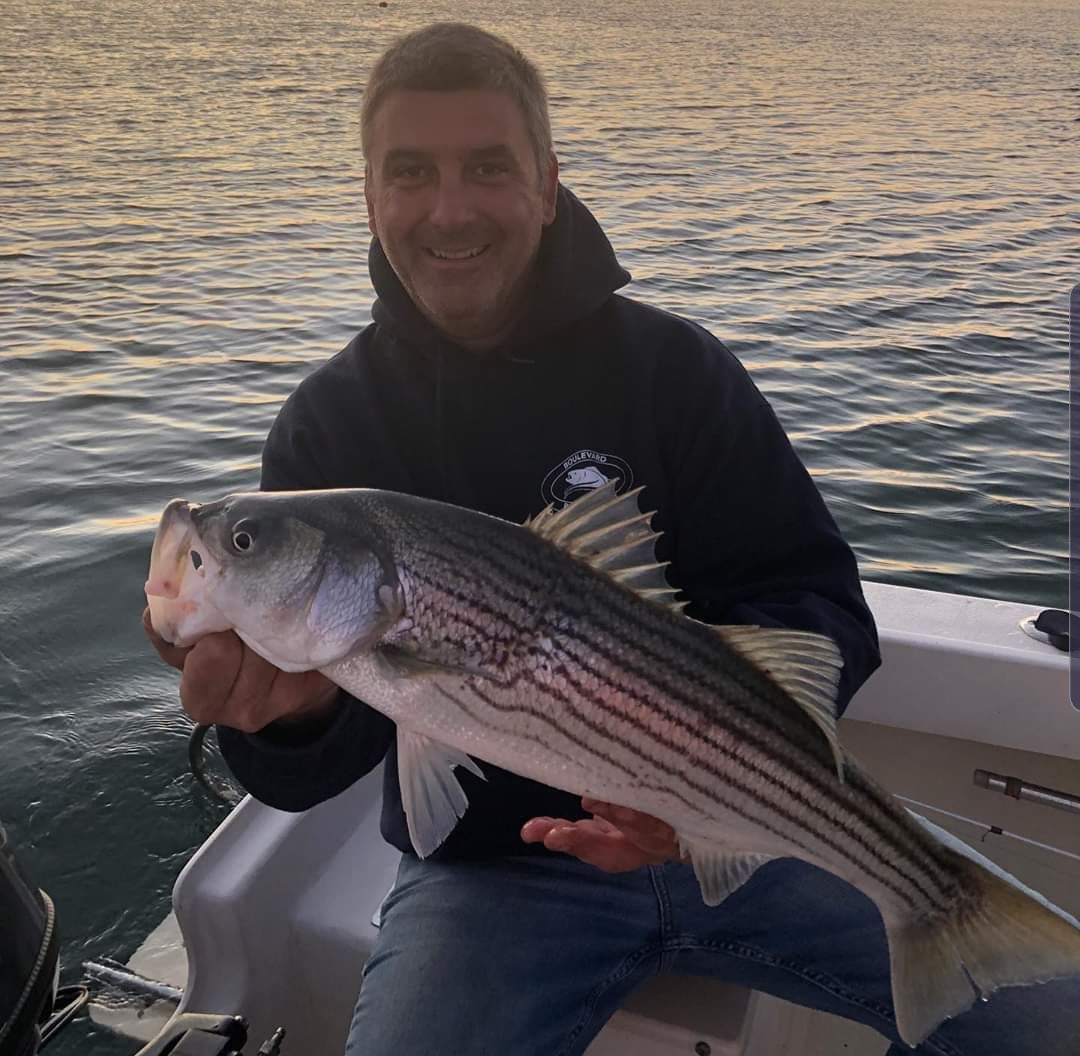 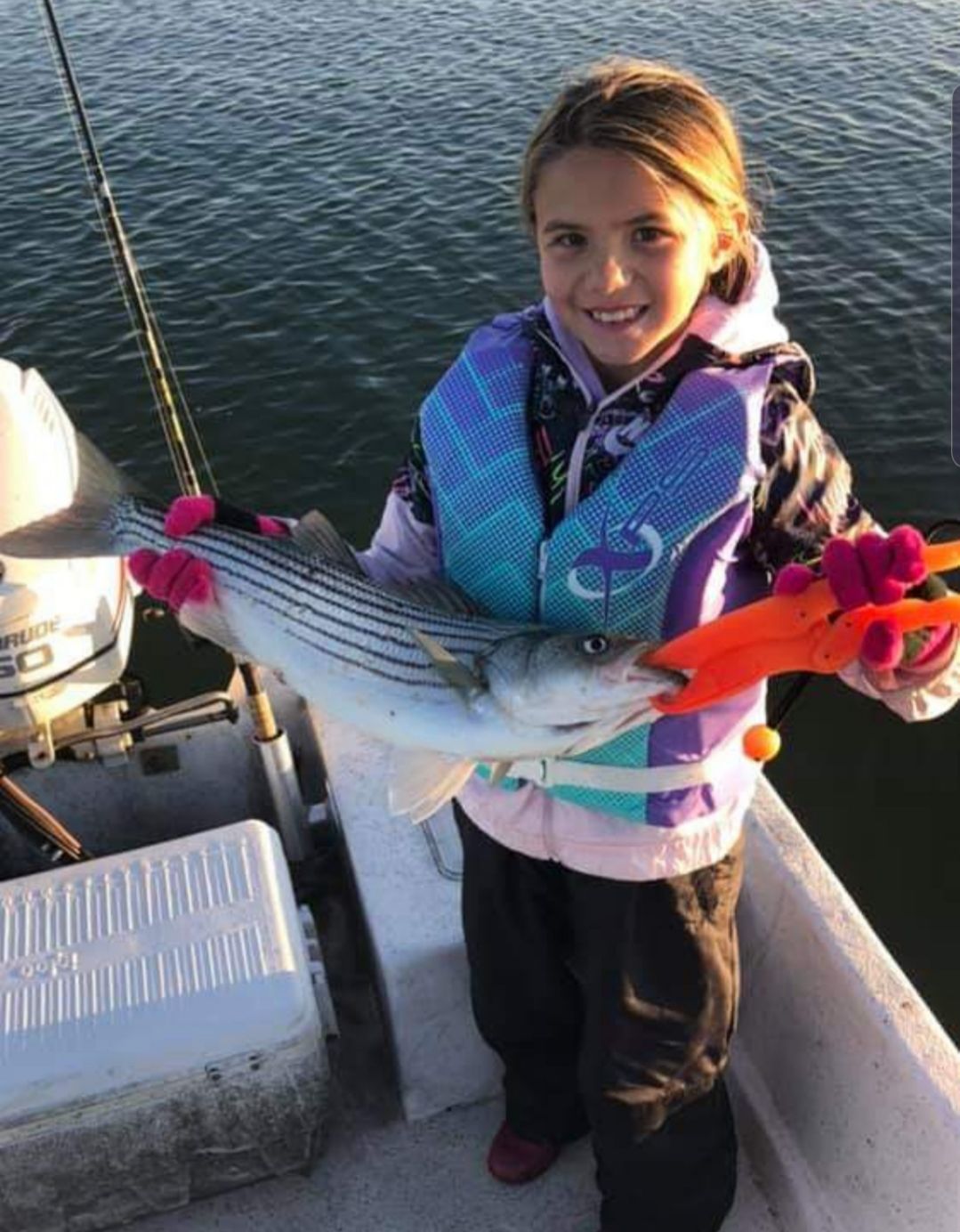 Jenna and a nice striper.

I guess we, as a fraternity, are adjusting because reports, thankfully, are still coming in. Granted, they’re not up to the amount I'm accustomed to, but something is better than nothing. Let's check out what went on.

Capt. Chuck, from the Sea Star III, sends word that “the sea bass fishing action is still good,” with the only caveat being that the keeper ratio is lower than it has been recently. Each trip is getting “some keepers," plus triggerfish and bluefish.

The Sea Star III pulls out from the dock daily at 9 a.m. and will be heading to wrecks and reefs targeting sea bass. Chuck says that plan would change if news of “good reports of stripers happens.” That would be great news, as it would provide another fish for anglers to pursue.

Pools this week were won by Kevin Murphy, with a 2.5-pound sea bass, and George Schoell, with a 2.55-pound triggerfish. Group photos showed that all involved enjoyed their day.

The Porgy IV “made it out” Saturday, and it proved to be a successful day, as Capt. Paul found action for his patrons. Karl Zeigler had 12 keeper sea bass, plus a pool-winning triggerfish.

A visiting angler, Mr. Lee, from Staten Island, caught his limit while others finished with double-digit keeper totals. Because of those numbers, "everyone had fish for dinner." That’s the type of trip we all like.

A mid-week trip produced a day that started slow. As the afternoon arrived, the “action was better," and several anglers were able to end their day with double-digit keepers. The winning pool fish of the day was a large triggerfish.

The Sailors Delight was out Saturday morning. They recorded a drop in water temperature that led to a slower bite than hoped for.

Though the water was cooler, they enticed bluefish to bite. They also reported that stripers were getting active in the back. I’ve heard of stripers hitting live-lined spot, so the back is a great place to checkout.

Sea Isle Bait and Tackle had two excellent reports concerning the “great” tog-bite of late. Adding their names to those who caught keepers recently was Ryan, who landed a 4.25-pounder, and Gordon, who edged him out with a 4.40-pounder. It’s great to see quality tog being caught as we wait for the arrival of the Nov. 16 increased bag limit.

A report, not long before my deadline, was that an angler, Travis, was having success with speckled trout. He caught 21 one evening, while also catching some weakfish. That’s the first report of them this season, so hopefully, we'll hear more.

Fishin’ Fever Sportfishing Charters, led by Capt. Tom, continued their great run with day-time swordfishing excursions, as October gave way to November. The end of the month saw “tougher fishing,” but their charter was still able to land three swords to 170-pounds.

The first November trip was a “good day offshore." They kept one of the three swordfish caught, then karma rewarded them with a bonus of two big eye tuna, which weighed 120 and 164 pounds.

Capt. Bob took the Terry Fisher party out on the Full Ahead for a sea bass outing recently. They went offshore, and a little more than two hours later, they limited out. That makes for happy anglers, plus more time to fish for other denizens of the deep.

Capt. Skip will have the Stalker, the big boat, running for stripers. He has limited openings remaining through the third week in December, so call (609) 972-5218 to grab one.

Members of First Fish Adventures’ crew hopped on the Relentless Fishing charter boat and went out to have fun chasing swordfish. They reported that Capt. Joe “got it done," as they went two for four on swordfish. Needless to say, they had a great time fishing.

The Miss Avalon was out over the weekend. They caught sea bass and triggerfish and kept everyone busy, as they were catching their dinner - that's all you can ask for.

They will be focusing on blackfish, plus any sea bass and triggerfish that are willing to bite Nov. 16, as the fall tog season opens and the bag limits increase. Call (609) 967-7455 for more information about the late fall season.

Cameron, from Boulevard Bait and Tackle, and a friend, got out for a late afternoon fishing excursion. They hit backwater areas and had ample action with “schoolie bass."

While they were on the water, they were fortunate to see an eagle perched on an osprey pole. That’s a nice bonus that anyone can see, even if you're not on the water. I saw a number of them along Sea Isle Boulevard in late September and early October, so if you’re in that area, or anywhere along the marshes, keep your eyes open. Maybe, you’ll be lucky enough to see one, or two.

The forecast is calling for cold weather, so bundle up when you head out.

If you get out, don’t forget to let me know how you did.