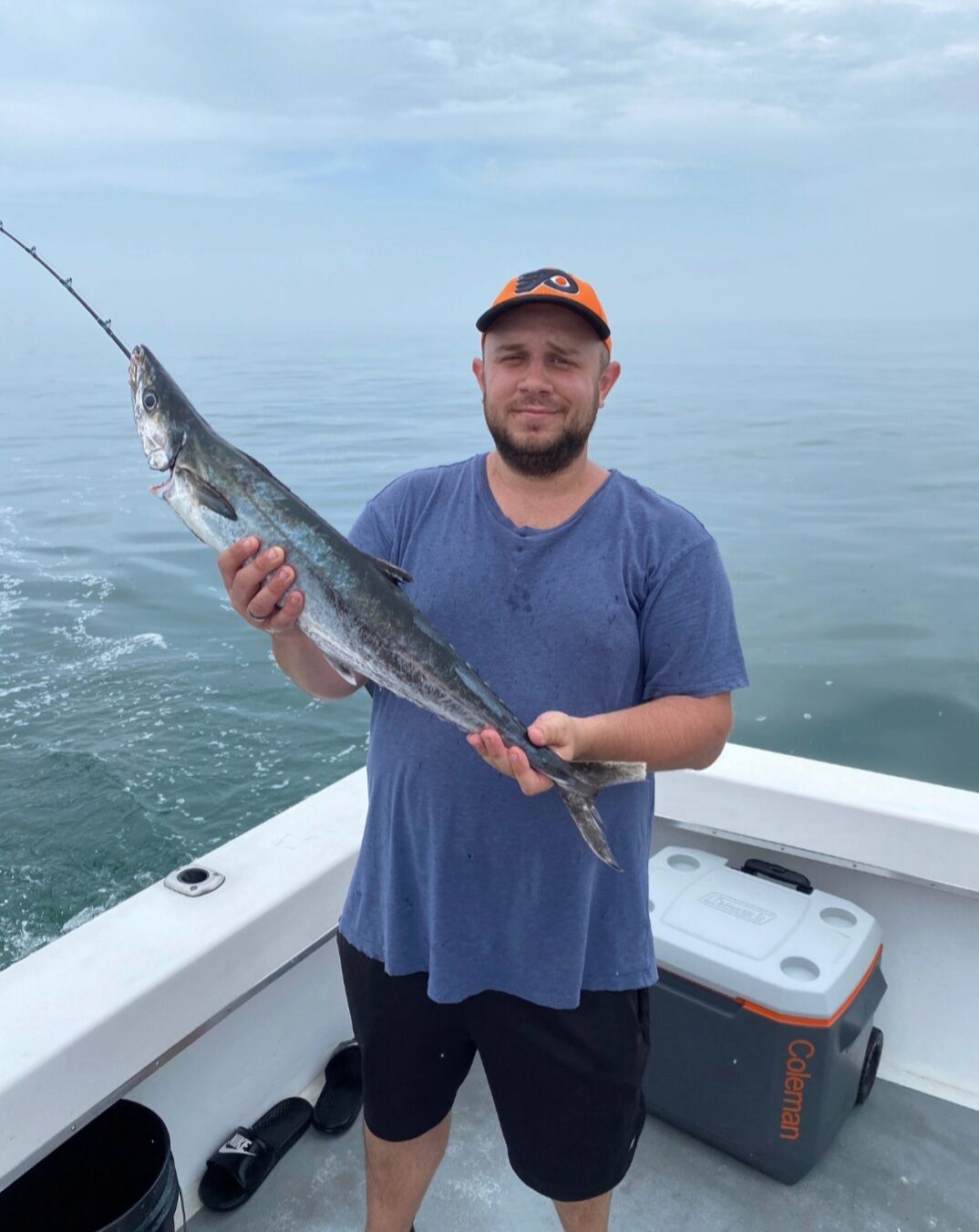 Phil and his nice king mackerel. 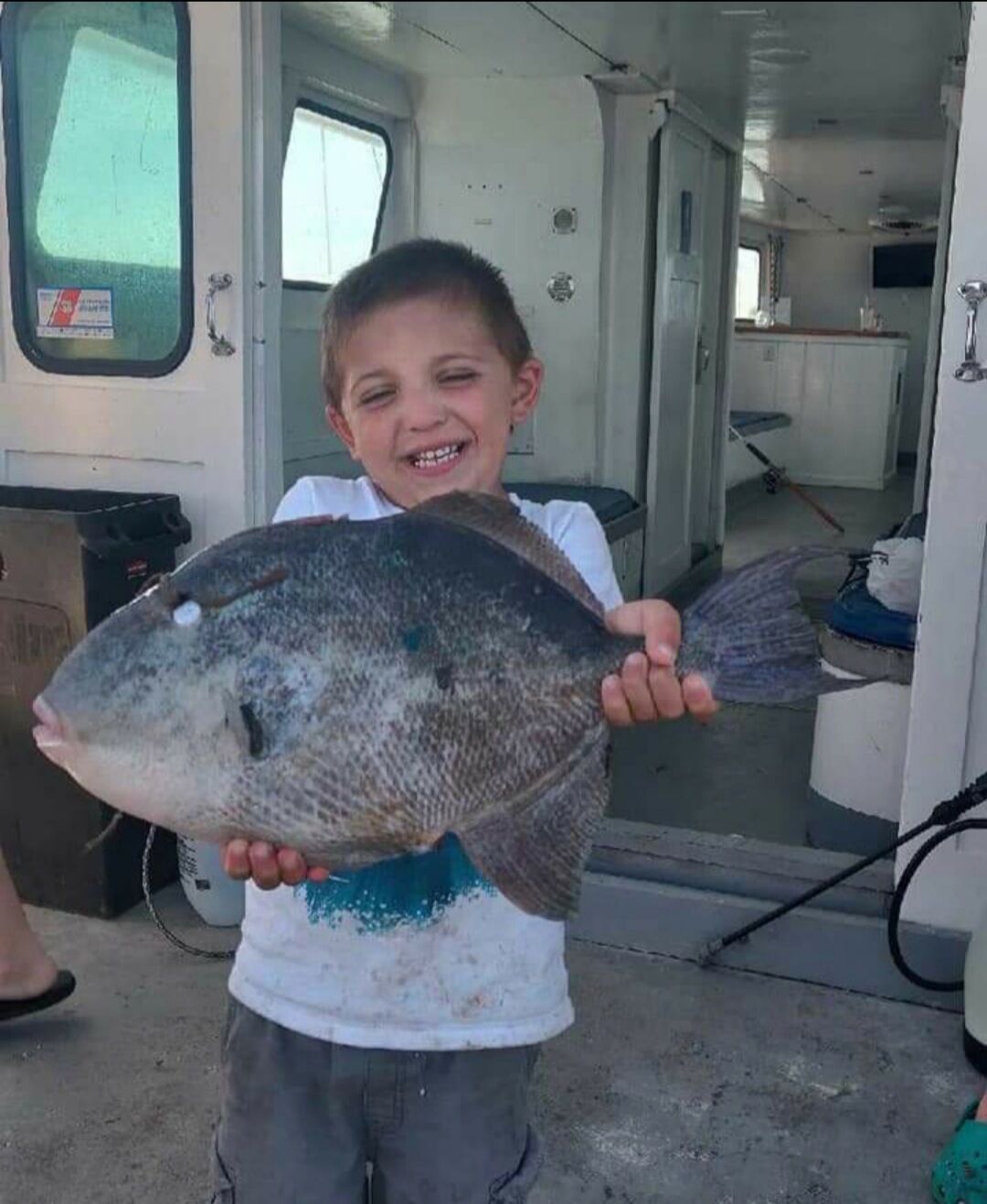 A young angler and his triggerfish. 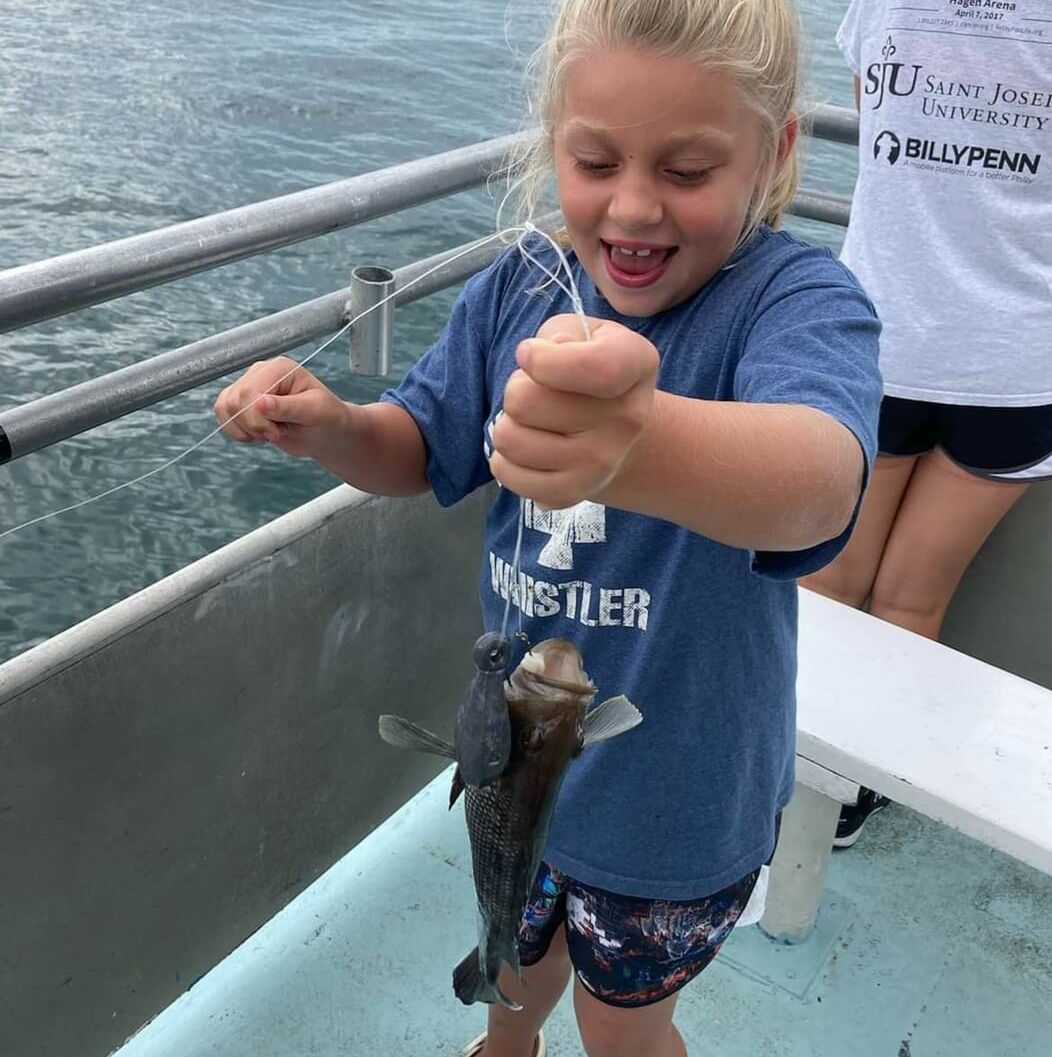 Gigi and her first catch, a sea bass. 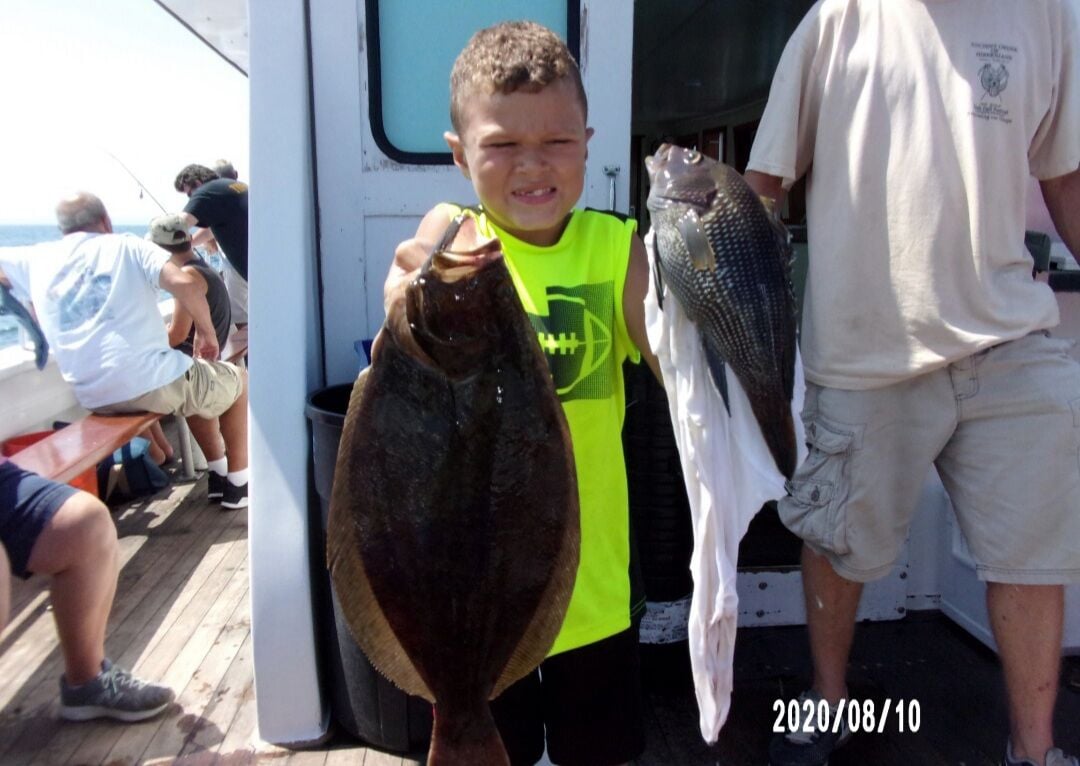 Two nice ones for this young angler.

It seems we are stuck in a weather yo-yo. What was an improved situation turned poor as the weather turned civil, windy and wet.

Successful fishing early in the week slowed as the weekend beckoned. While we wait for the northeast wind and rain to leave, let's check out what occurred.

The Miss Avalon is sailing two daily trips to the local reefs as they strive to have their patrons experience the sensation of “bending rods." They have been doing just that, as they have been catching triggerfish, flounder and sea bass. Anglers are going home with dinner, so all are happy.

You can also take a nature cruise on Tuesdays or Thursdays, or call and set up a party cruise. Whatever your choice, get out, relax, and have fun on the water.

The Starfish is also catching plenty of sea bass, triggerfish and flounder. They also sail two daily trips, plus specialty cruises. They also had word of a first-fish catch for a young lady angler named Gigi. Congratulations on number one.

A new item they are offering is called Crusin’ Tiki Sea Isle. It’s a hexagon-shaped vessel featuring a covered area in the middle that serves as the gathering area. They offer time slots for bridal parties, relaxing cruises, and even a morning mimosa trip. Trips are for up to six people, last about an hour and a half to two hours long, and are BYOB. Check them out.

The Avalon Lady is still catching flounder and sea bass in the back waters. They also have started to pick up some croakers. Don’t forget that they also are running crabbing trips, so call ahead, find out when they are going, and go catch some crabs for dinner.

First Fish Adventures is staying busy. They had a birthday cruise recently that provided some great bluefish action for the celebrating party. That sounds like a nice way for anglers to get together and celebrate a special day. Other recent trips have produced Spanish and king mackerel.

Capt. Al, from Bayhound Charters Light Tackle Sportfishing, had John Gatto and friends out recently. They returned to the dock with a great trip consisting of eight flounder and two sea bass.

Boulevard Bait and Tackle continues to stay busy with anglers stopping by with their flounder catches. The reefs have been busy, and the back bays are still holding nice fish. Shane caught a 22-inch, 2.9-pounder in the back, while Jack caught 4.5-pound fish at the reef. He was using live minnows as bait.

Avalon Hodge Podge reported a successful mahi-mahi day for Capt. Tim McGuire and the crew of the Pequot. They caught 10 tasty fish for their efforts.

Like the other boats, the Porgy IV, with Capt. Paul, has been moving forward despite the conditions. The catch numbers were down, but thankfully not out. Pool-winning fish went to John Panvini, who also limited out, Dan Stinsman, who limited out, as well, Jim Fahey who won with a 21-incher, and Michael Raila. Perseverance and catching multiple fish paid off for these anglers.

The Sea Star III had a Jeckyl and Hyde week, as things “started out good,” then slowed some as the weekend weather affected the fishing. Even with that factor, multiple three-fish limits were caught. The top highlight went to Frank Servocky, who caught an 8.15-pound fish. Not surprisingly, it won that day's daily pool.

Capt. Mike, from the Miss Chris, reported a great start to the week. They were fishing “The Point” area and catching kingfish and croakers. The end of the week was tougher, but that was the consensus of most reports. Still, fish were caught, so it wasn’t a total washout.

A couple of pool winners to note were Hannah Palij, who won with her 16-inch kingfish, and Ella Manowski, who claimed her prize with a nice keeper weakfish.

Stalker Fishing Charters, with Capt. Skip, is staying busy with his deepwater fluke trips. He is also taking reservations for fall striper trips in the back bays on his skiff. They will start in early September.

You may also grab a date for trips on the Stalker II, in November and December. Those trips will be targeting the migratory striped bass in the ocean.

The Fishin’ Fever had a quality trip for the Richard Crystle party. They had a boat limit of flounder, including a 6.5-pounder, a couple of 5-pounders, and some 4-pound fish. They also had some sea bass and finished the day by tallying seven mahi-mahi.

Off The Hook Bait and Tackle weighed a 2.3-pound flounder for Bob Sullivan. He was fishing in the Plumbers Union Tournament.

Cape May Bait and Tackle reported that “lots” of flounder are being caught from the local reefs, as well as the local beachfront. They also mentioned that their friend, Frank Servocky, did well by catching his limit, which included his 8.15-pounder mentioned earlier. Try getting to these hot spots so you can catch your share of some nice flounder.

Crabbing is also reported to be terrific lately. Stop in, grab some traps and bait, and get to a spot where you can catch your dinner.

The Sailor’s Delight celebrated their 2,000th caught flounder of the season. It was caught by a young lady angler, so congratulations are in order for her. In addition to the flounder, they have also been catching weakfish and kingfish.

The Cape May Lady has had some nice trips lately. They have been catching some big triggerfish, as well as some sea bass. They have also run some different trips for tilefish, as well as a recent flounder/blackfish outing. Give them a call to see what they are fishing for, then get to the dock.

Cathy, from Sterling Harbor Bait and Tackle, reports “very good” flounder fishing at the Wildwood Reef, the Cape May Reef, and Reef Site 11. Mike Antonucci mentioned a limit caught by the crew of Mike Reed’s “Kensington Princess." He was in the store to weigh his 5.95-pound flounder.

The back bays still have flounder. You need to look for deep, cool holes or fish towards the inlet areas. Also, small sea bass are plentiful in the back waters.

Mahi-mahi are around sea bass and lobster pots about 25 miles off the coast. Crabbing has been great recently and “should remain so” through the end of September.

Grassy Sound Marina reported a great day for 8-year-old Owen Moore and his pop, Timmy. The pair caught four keeper flounder on white Gulp and minnows. They were fishing the incoming tide near the marina.

A possible state record is being evaluated. Tight Lines Bait and Tackle North, in Somers Point, reported that recently, Jeff Meyer, who was spearfishing, caught a 5-pound, 7-ounce triggerfish. More on this later as the process develops.

Thanks to Phil for submitting a nice picture of his king mackerel that he recently caught. Nice catch, Phil.

The Mid-Atlantic Tournament concluded last week, and 183 boats, a tournament record, participated in the format where anglers were fishing three out of five available days. After totaling the entries and counting the calcuttas, the total prize money up for grabs will be over $4 million, also a record. I hope to have the final results for you in the next report.

Through Aug. 20, Doug Allen lead the white marlin category, with a 77-pounder. The bigeye tuna division was led by Mikle Yocco, with a 189-pounder. A 33-pound dolphin, caught by Steve Summers, is the current leader for that category.

We didn’t do poorly for a period that lost several days to the northeast wind and rain. Hopefully, we can get a nice stretch of weather so the good fishing can resume.