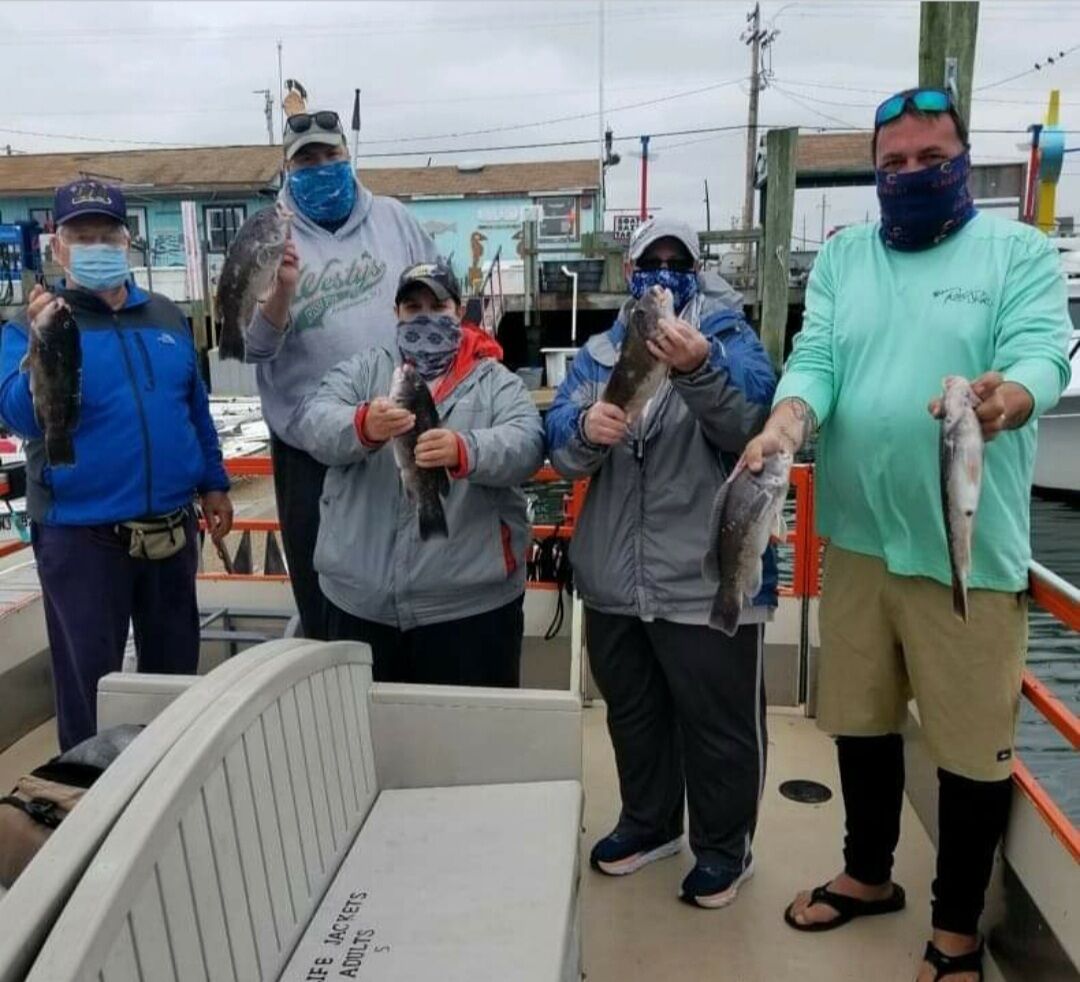 Anglers and their blackfish. 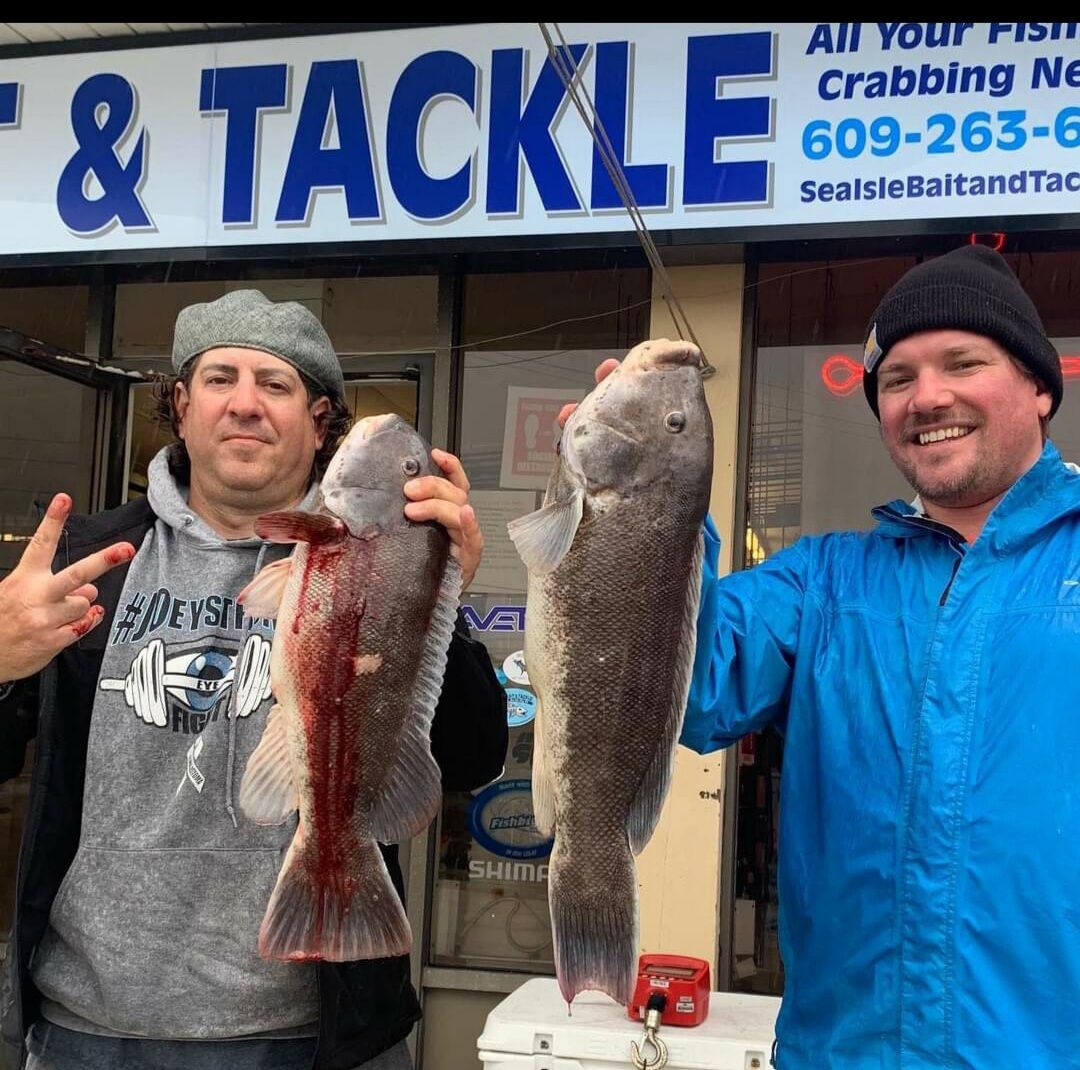 Two nice blackfish for these anglers. 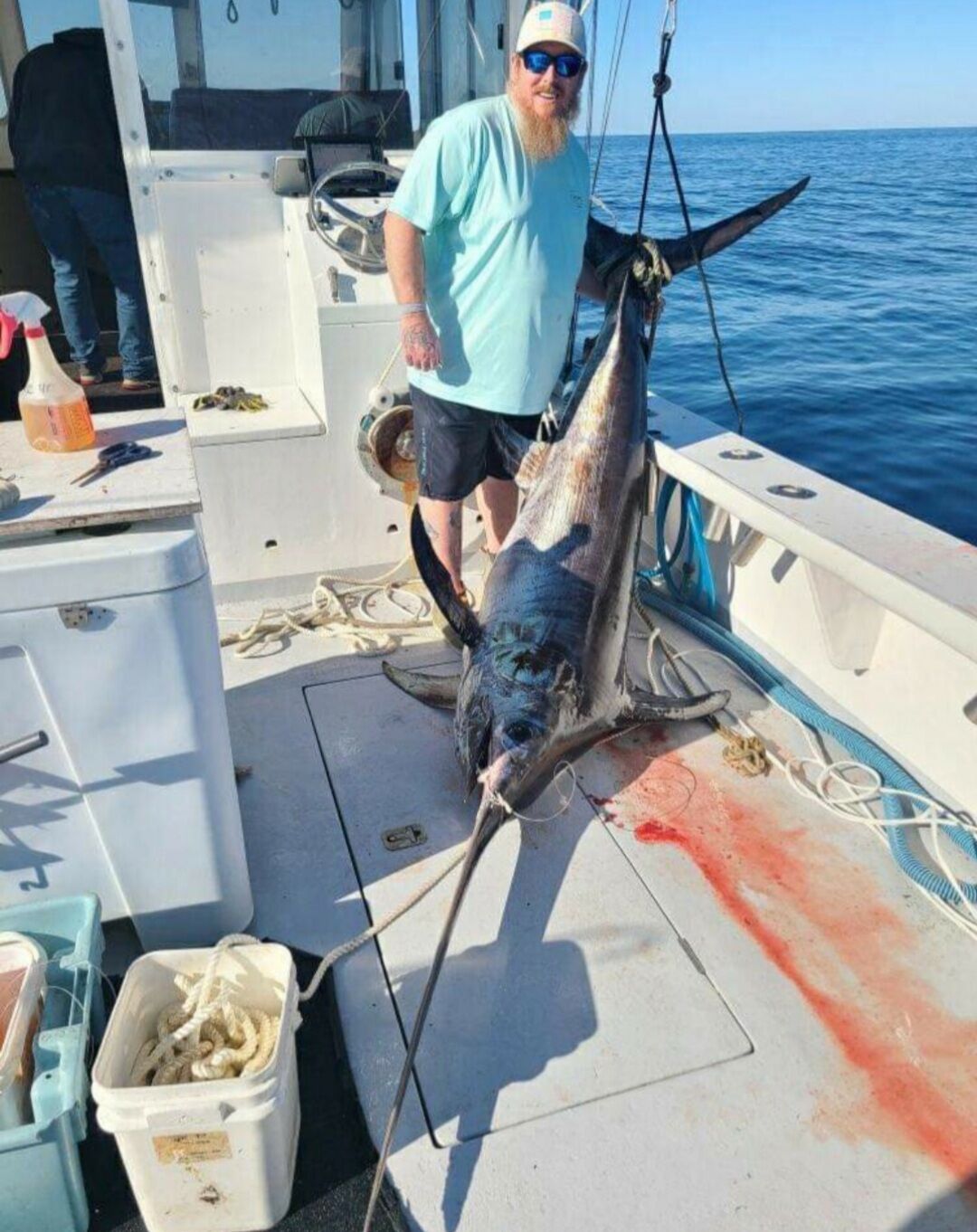 Frank Land and his swordfish. 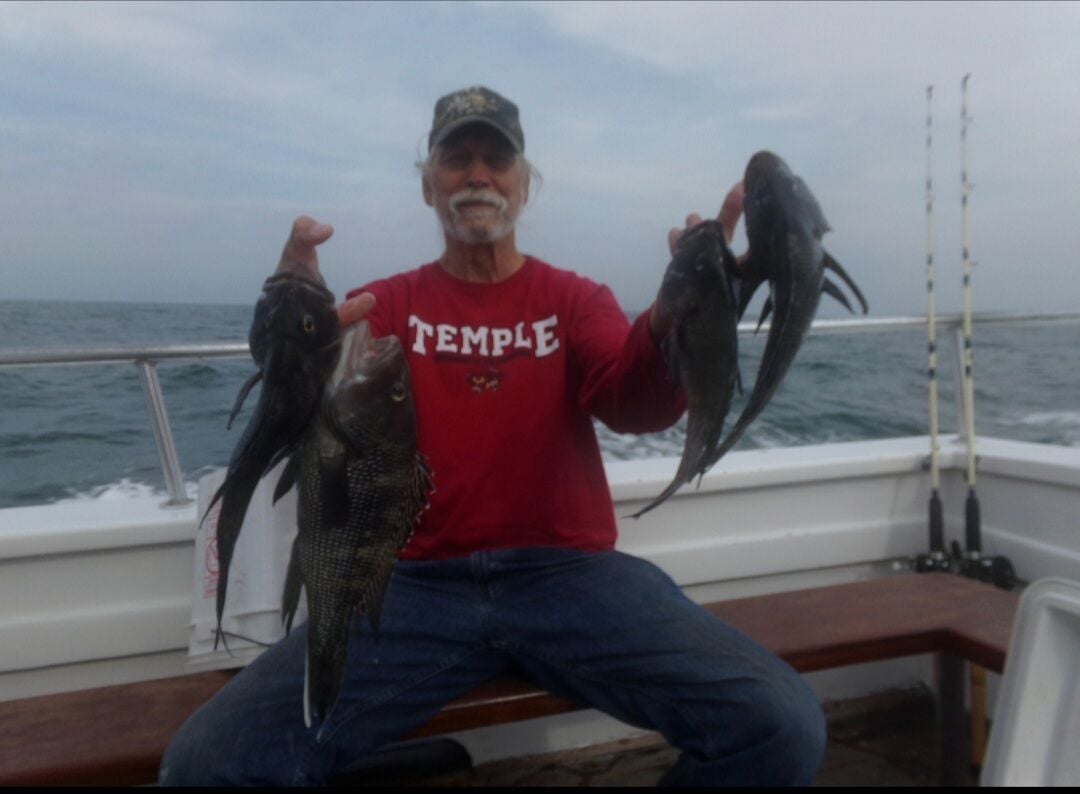 Happy Veterans Day, and thank you for your service.

Fishing was slower than we would like. It’s the time of the year where that happens.

With that said, we still have fishing news to report - not a lot, but some is better than none.

The Sea Star III was fishing during the week, but not as much as they would like. The poor weather, along with fewer anglers because of the threat of inclement weather on other days, led to fewer trips than a normal week would see.

Despite that, Capt. Chuck reported that sea bass action remains “good,” with shorts and keepers combining for a nice mix. We wish that they were all keepers, but as you know, that wouldn’t be realistic. Triggerfish also weighed heavily in the catch total, as well as a few other species.

Pool winners during the week, both with triggerfish, were Ryan DeJesus, with a 3.7-pounder, and Jason Thomas, with a 4-pounder.

Sea Isle Bait and Tackle reported some nice blackfish catches recently. Chris stopped in with an 18-incher that weighed 3.7-pounds. Also stopping in was another Chris - obviously a popular name amongst anglers - who garnered a 6.35-pounder. With him was fellow fisherman Vince, who weighed a 4.7-pounder.

The bite is reported to be growing as the foul weather exits the area. The opinion is that the cooler weather should have some nice blackfish moving in.

Cape May Bait and Tackle reported that short stripers and snapper bluefish are swimming off the area's beaches. The Cape May Inlet has been producing an ample amount of keeper blackfish. You're still allowed to harvest one fish, but it won’t be long because the bag limit increases to five fish per angler Nov. 16.

Sea bass, weakfish and triggerfish are being caught at the local reefs. The regulations for sea bass changed Nov. 1, where the size limit increased to 13 inches, but the bag limit also rose. You can now keep 15 fish per outing. Visit the shop to check out their bait selection and grab any gear you may need.

The Sailor’s Delight is fishing for bluefish and stripers. They are also sailing for blackfish at some local jetties. They have been doing well with the new trips that they started offering.

Recently, a party of six each caught their one keeper, and on another trip, one lady angler landed her first keeper blackfish. A mid-week trip netted an out-of-season flounder and nice keeper blackfish. The flounder was tagged and hopefully will be caught in the future, so information can be gleaned about its travels from the time between each catch.

Capt. Skip, from Stalker Fishing Charters, reported great action on the backwater stripers. He's had the skiff out with the morning being an active time. Some of the fish are keeper-size, while those with bonus tags have a terrific chance at bringing home dinner. Give him a call, at (609) 972-5218, to grab a day to go fishing.

Before too long, Capt. Skip will be switching to the Stalker, his bigger boat, so he can target ocean stripers. If you’re interested, call him to see what times are available.

Capt. Tom, from the Fishin’ Fever, reported that angler Frank Land was recently daytime swordfishing. The day was fruitful, as Frank landed a 285-pound swordfish. Congratulations on a nice catch.

We had less action than we are used to, which is the negative effect of strong winds and rain. The trade-off is that, hopefully, you used that downtime wisely by preparing your gear for the remainder of the fall, then the winter season.

You can start by thoroughly rinsing your poles and reels, which will add more seasons to their life. You may also want to remove the reel, which would allow you to clean the pole's area underneath before cleaning the bottom of the reel.

Salt tends to accumulate in that area since it may be ignored, even if you wash your gear down after each trip. A salubrious oiling, or having your reel professionally serviced, is also a smart idea.

While you're at it, check your pole's eyes for cracks. I recently had a cracked tip, and it chewed my braid. I got lucky and saw it before I lost any rigs, or worse, any fish. If cracks are found, change it yourself if you can, or take it to a local shop and have them repair it.

Also, don’t forget to check your reel seat to guarantee that the movable parts work so they will secure your reel properly to the pole. Maintenance now will help you when you return to the water.

You should also thoroughly clean and inspect if you are done fishing for the year. Cleaning and storing your gear now will make it ready for spring.

If you still plan on fishing, you can also tie your own rigs. Making rigs and snelling hooks yourself is enjoyable and economical. Catching a fish on a rig that you tied and seeing the benefits of your work is a gratifying feeling.

Take care, good luck if you get on the water, and I’ll see you around.