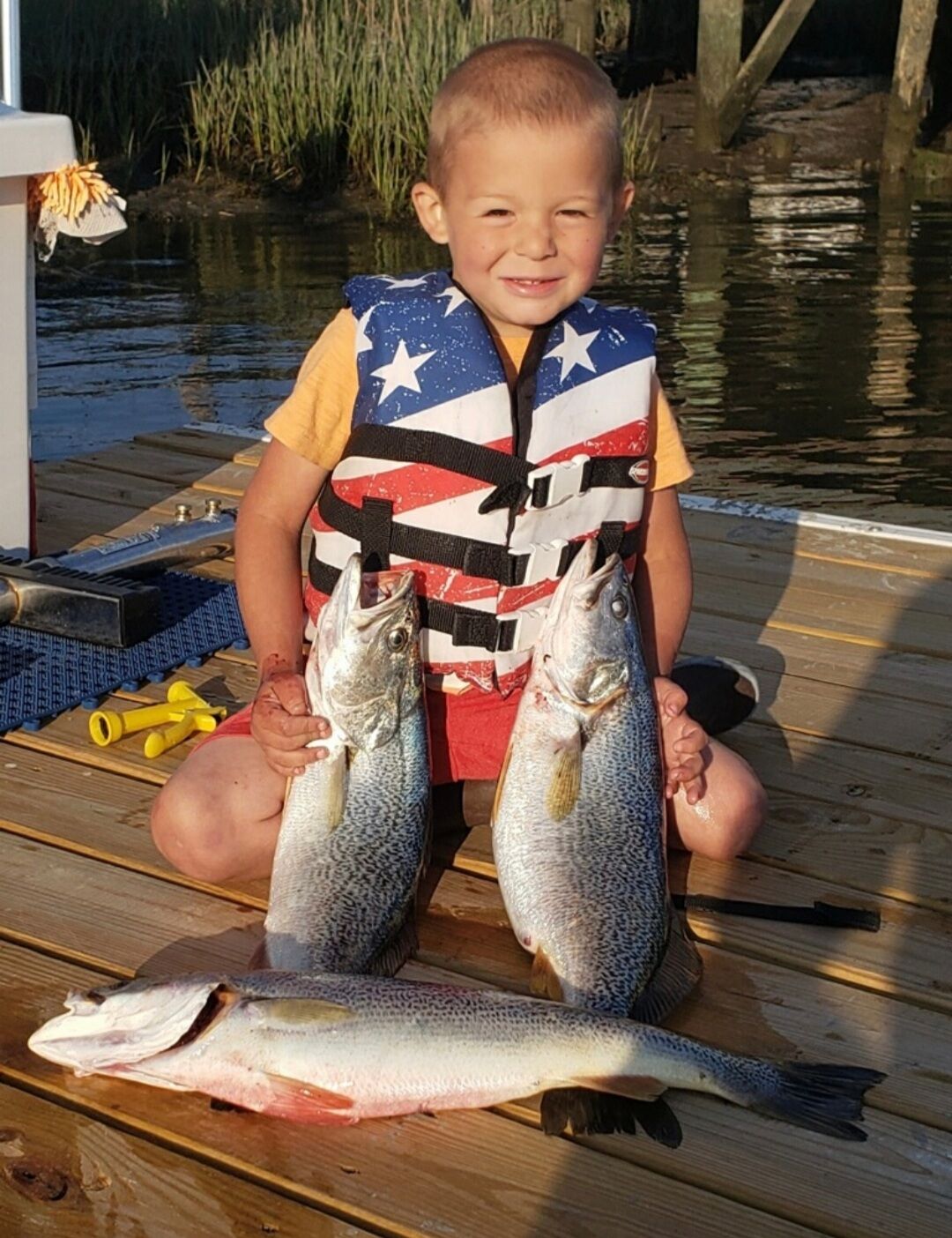 Fisher Hennigan, 4, with his first-ever weakfish, plus two others. 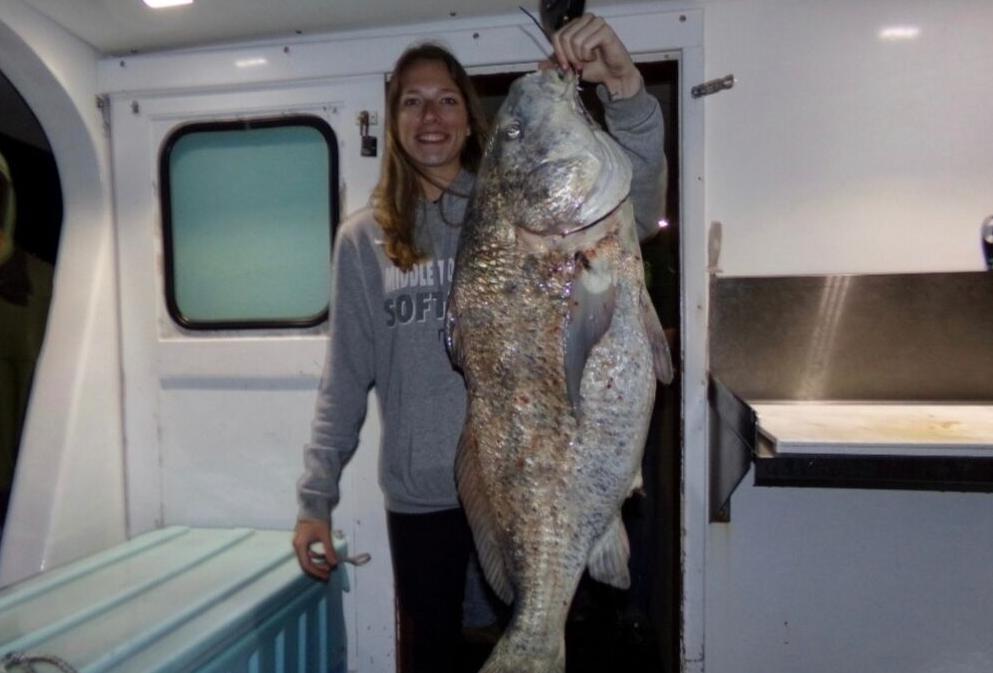 Morgan Kern with her 38.2-pound drumfish. 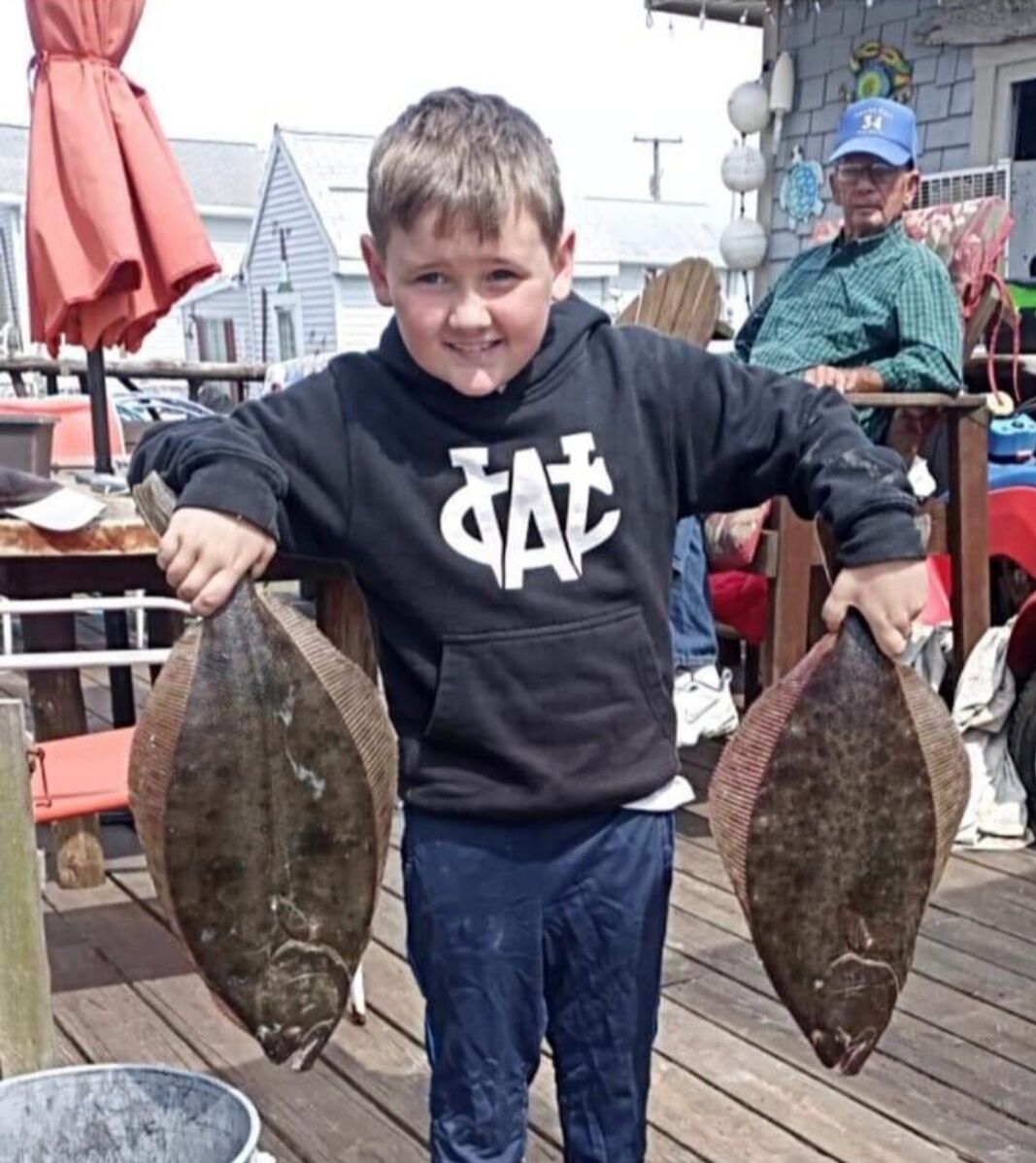 Myles Dettrey, 7, and his two keepers.

Flounder season's opening weekend had to be to the liking of those who enjoy summer fishing weather.

It was bright, sunny, hot, and yielded anglers in droves. Many were in the backwaters targeting flounder, while others were in the bay setting up to catch drumfish or striped bass. The oceanfront beaches were also choice places to target those species, while sea bass could be caught at the wrecks and reefs.

The Sailor's Delight had a great opening day weekend for flounder by hosting four trips, two on each day, and even had time to host a bachelorette party May 22.

The first keeper on the morning trip that day came over the rail 12 minutes into the trip. They didn’t have to travel far to find keepers, as their exploratory trips paid immediate dividends. For the weekend, many flounder were caught, the largest being a 23-incher hooked by Brian.

The Cape May Lady is running drumfish trips and also ran a tilefish trip recently, which produced three goldens over 40 pounds and 20 over 20 pounds. Call ahead for reservations and to see what they are targeting, and when.

Excellent weakfishing around local jetties was reported by Sterling Harbor Bait and Tackle. Try using pink zooms on a small bucktail or floating bloodworms under a bobber. Fisher Hennigan, 4, landed his first weakfish using this method.

The drumfish bite “remains good” on both the Jersey and Delaware sides of the bay. Striped bass are being caught from the bayside beaches by those throwing plugs or tossing clam baits.

The opening week of flounder season was “great,” as many fish were caught, and most anglers brought home some keepers. Crabbing is productive now and should be even better after the approaching full moon.

Myles Dettrey, 7, had a great May 22, as he caught 22 and 23-inch keepers. John Buchinsky stopped in the shop to show off his 24-inch fish that would have won the opening day contest if caught one day earlier.

Later in the week, Adam McGraw caught a 22-inch, 3.6-pounder. Two 7-year-old boys were fishing hard on a family boat, and another young angler, Logan Mitchell, caught two keepers during his time on the water.

The Miss Avalon has been fishing for sea bass and has had some “great” days on the water. Now that flounder can be kept, chances of getting large fillets for the freezer doubled. Give Capts. Irv or Brandon a call, at 609-967-7455, for the Miss Avalon and Avalon Lady's schedules.

The Avalon Lady opened with flounder season and had beautiful weather for fishing. The opener saw them return with 11 keepers for the trip. Trips May 23 and 24 also produced nice keepers. They are running four-hour trips, from 8 a.m. until noon.

The Starfish has been fishing for sea bass recently. For their updated schedule, call them, at 609-263-3800.

Boulevard Bait and Tackle had plenty of action to report. The main point is that Sea Isle City's beachfront is one hot fishing spot. Striped bass, with some being over 40 inches, were energetic recently. George, Jeremy, Tony and Brendan all caught nice fish, with Brendan’s topping them all, at 47 inches. Others in the keeper range went to Mike, who took a 30.5-inch fish home for the dinner table, and Alan, who was fishing in the Delaware Bay and stopped by with his big drumfish. When the scale settled, Alan had a 68-pounder to his credit.

Sea Isle Bait and Tackle had a successful tournament for flounder season's start, with 145 participating, which was the largest number of anglers to ever do so. It led to a busy weekend, with many flounder being caught.

After the fish were weighed, the winner was Dave Miller, who claimed the top spot with a 5.6-pounder.  Many fish over 4 pounds were registered, and those added to the excitement of the day - congratulations, Mike.

Aleese stopped in after a morning of drumfishing to weigh her catch. She was happy to see that her fish weighed 57.5 pounds - nice fish, Aleese.

Avalon Hodge Podge mentioned that Joe and his crew bought some clams at the store, hit the Delaware Bay, and landed nice drumfish. Claire Furmanski, who was flounder fishing using baits that were bought at the store, had another noteworthy catch, a 21-inch flounder from a recent outing.

Bayhound Charters Light Tackle Sportfishing tallied five keeper flounder and an excellent weakfish. Give Capt. Al a call, at 609-602-2662, to schedule a trip.

The Sea Star III had “a full and busy week." Sailing various trips for sea bass, flounder and drumfish during the week leads to a full schedule.

The sea bass action lessened some, but keepers are still being caught while the cool water temperatures haven’t allowed for consistent fluke catches either, but keepers were also caught in that fishery.

Drumfish are biting, and Capt. Chuck reports that the size of those fish are increasing. He hopes fishing will improve as the water temperatures increase.

The Miss Chris reports big fish are still cruising around. They had one angler land a 53-pounder, but mentioned that larger ones are still out there. The season for these fish is limited so don’t wait. They are also fishing for sea bass during the day.

They are fishing four-hour trips for these fish, so you could fish for both species in one day. Check out the CapeMayFisherman.com website for their fishing schedule.

Cape May Bait and Tackle reported a nice striped bass that was caught by an angler named John, who bought some clams from them, then fished the Cape May Point beach.

Good luck if you go fishing. Take care and I’ll see you around.