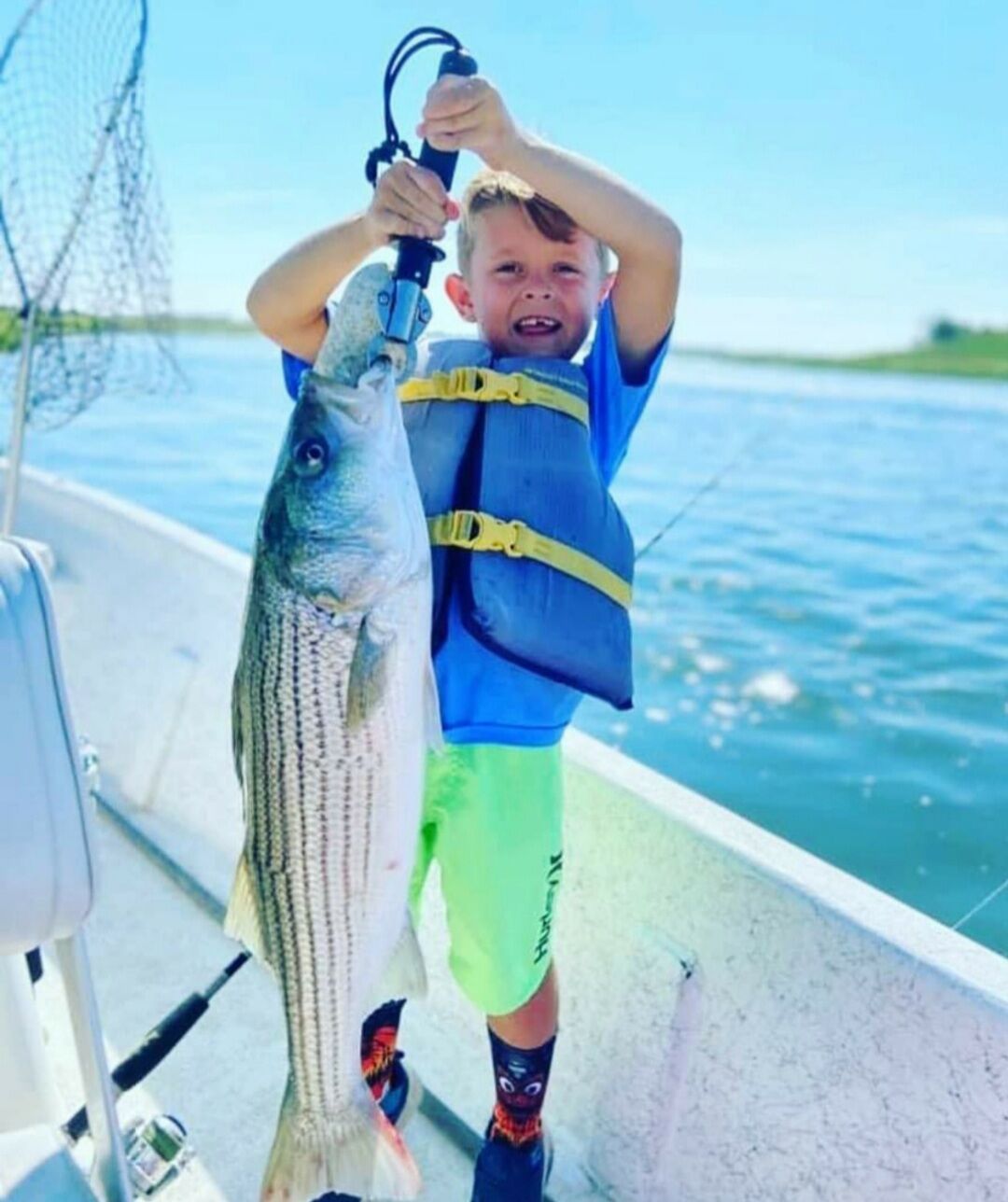 William and his keeper striper. 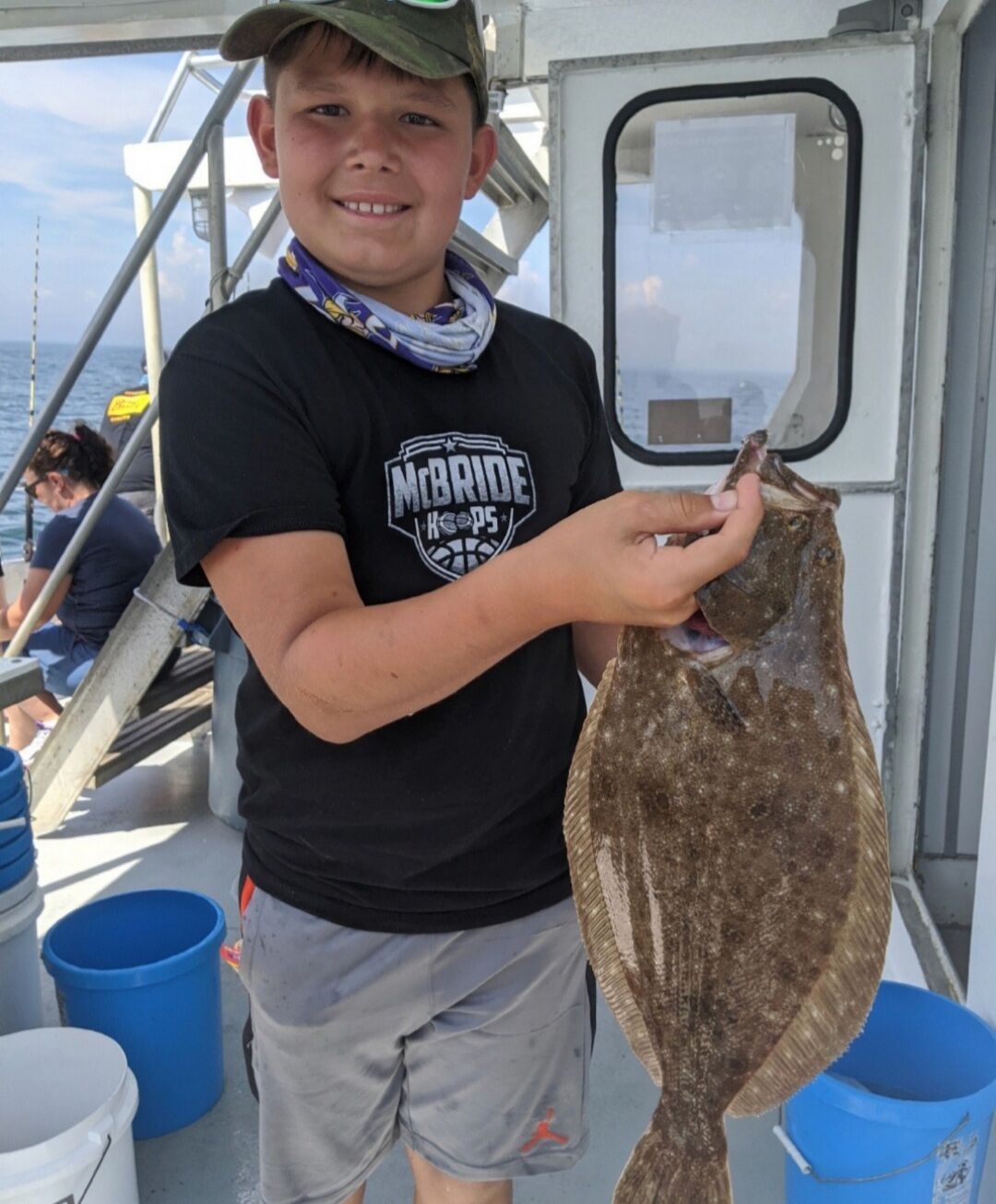 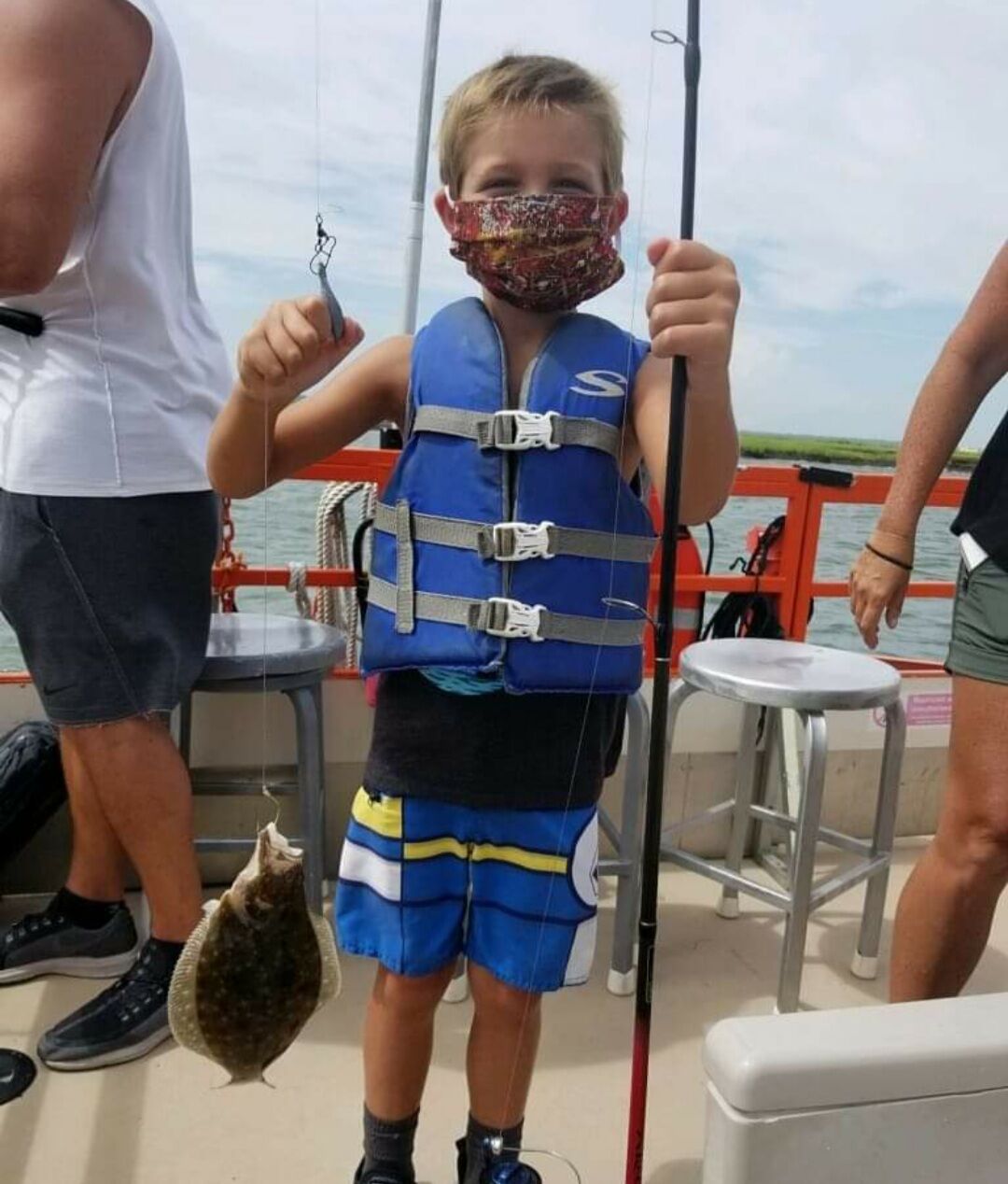 A young angler and his first-ever flounder. 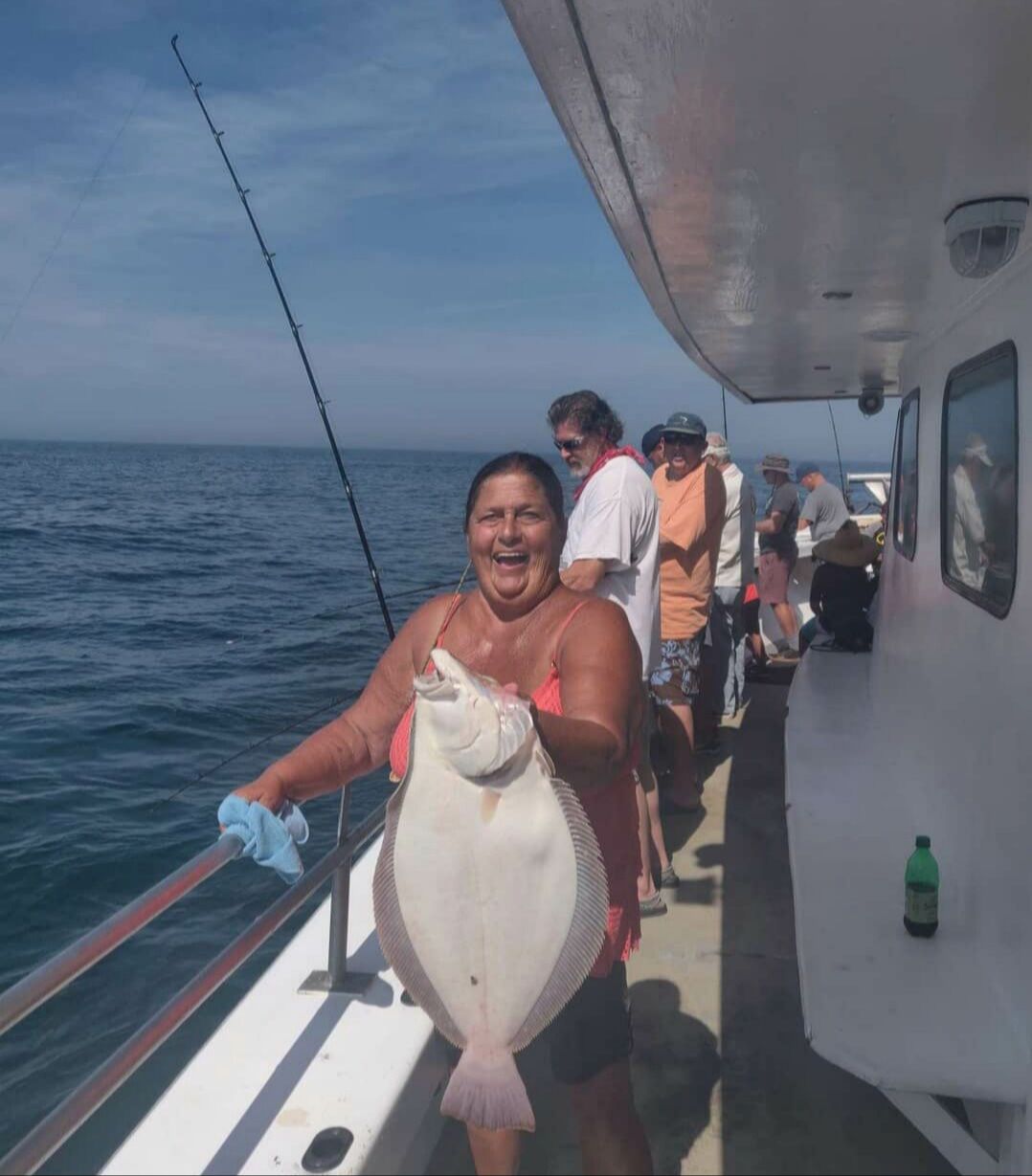 Linda and her nice flounder.

We knew that, inevitably, the weather would catch up with us.

Captains and anglers felt Tropical Storm Isaias' effects days before it arrived. These storms have a layered impact on fishing, as their force is felt before, during and after they come. The days to recover could run anywhere from three days to a week.

Hopefully, this storm's effects will be out of our area quickly and we won’t lose more than a few fishing days during the prime of our summer season. Let’s check out what happened before the big blow.

Capt. Mike, from the Miss Chris, reports that his patrons had another good week of “mixed-bag fishing." The two main components were flounder and bluefish. Other fish appearing were kingfish, croakers and weakfish.

A late report from Capt. Mike before my deadline said that “fishing is right back to normal." Anglers on his post-storm trips were catching keeper fluke, weakfish, sea bass, bluefish and kingfish. That’s great news for everyone involved.

The Sea Star III reported productive early-week “action,” with a “good amount” of keepers and shorts. There were “many” limits recorded, while the highlight of the week was a 6.35-pound, pool-winning flounder. It was one of three pool winners for Frank Servocky, who also won with 3.5 and 3.6-pound fish. Frank won his three pools on consecutive days.

Other winners were Bob Bennett (3.75), Harry Theurer (4.0) and Andrew Breischaft (4.35). Let’s hope other nice fish like these are hungry after the storm has passed.

The Porgy IV had no problem putting flounder in its anglers' coolers. Limits were recorded on each trip, even as conditions made for challenging days. A split pool went to John Ricardo and Mike Goida on one trip, while another was won by Brian Konstanty, who landed a 24-inch flounder.

Brian limited out while edging Rob Rizzo, who also caught his limit. John Panvini also claimed a pool with his 23-incher. He caught two fish during that trip, but if one of those is the biggest of the day, then all is great.

Cape May Bait and Tackle reported that weakfish, croakers and kingfish are being caught from the local beaches and rock piles. Bloodworms and fish bites are nice baits to use. Flounder are being caught around Cape May Point's rock piles if you toss out a minnow, squid or Gulp. Try to fish parallel to the rock pile and retrieve the bait slowly. Early morning and evening hours as the beaches empty are good times to try this approach.

The Sailor’s Delight is putting their customers on flounder. Some are small, but there are still keepers among them. Even as the storm was approaching, fishing in the back waters was good. “Plump” kingfish were also being caught and added to the mix of tasty fish in the cooler.

One young angler, who was on his first fishing trip, caught his first flounder. Congratulations, young man.

Also, the Sailor’s Delight just recorded their 1,800th caught flounder of the season. Many are keepers, while most are “shorts," but the information is interesting. When all other catches are factored in, it provides an informative view of the importance of the back bays' fishery.

The Cape May Lady has been having some good trips recently. They run tile trips, a combo tog and flounder trip, and some flounder specific trips. Besides flounder, other species may bite. One lady angler who did well was Linda Gilmartin-Fiordimondo, who landed an impressive fluke. Nice job, Linda.

The back bay area is proving to still be a quality spot to visit. Matt Dougherty was pictured on the pier with a nice flounder, proving that it's a great place for fishing. Crabbing is also good from the pier if you're looking for something different to try, and as we know, they are good to eat.

The Miss Avalon was cruising the local reefs and catching flounder and triggerfish. Some blowfish, keeper weakfish and plenty of sea bass, including some keepers, were also being caught. This mixed bag makes fishing that much better for the anglers involved.

They are sailing two daily trips, leaving the dock at 8 a.m. and 1 p.m. They sail one five-hour outing on Sundays, which leaves at 8 a.m., so be on time.

The Avalon Lady continues to pick up flounder and keepers from the back waters. That’s great to see as we enter August. It gives the kayak anglers and those with smaller vessels hope that they, too, can hook into a keeper fluke.

First Fish Adventures of Sea Isle had a “great week." They were focusing on bluefish and Spanish mackerel. Their patrons caught those and ribbonfish and houndfish. They also had a neat experience when they saw a “gigantic” leatherback turtle. The wildlife that you can see is definitely worth the trip, and when you also catch fish, it makes the trip even better.

The Starfish is catching triggerfish, flounder and sea bass during their trips. They have been sailing two trips daily, so plan accordingly.

Avalon Hodge Podge is reporting that crabbing is terrific right now. As the waters calm after the storm and before you do some more fishing, it’s a good time to grab some traps and handlines and go crabbing.

Boulevard Bait and Tackle had a great week that was highlighted by a particular catch from a young angler named William. While fishing in the back bay, he landed his largest keeper striper. Good job, William, and congratulations on your nice catch.

The 29th Annual Mid-Atlantic Tournament is scheduled for Aug. 16-21, and the projected purse is $3.5 million. Locally, the Canyon Club, in Cape May, will serve as the event’s host marina. The second port that anglers may visit is Sunset Marina, in Ocean City, Maryland.

Don't forget, blackfish season opened Aug. 1, so if you’re fishing a wreck for triggerfish or your two sea bass, or fishing a local rock pile, you may get lucky and catch one. You can keep one fish, at 15 inches.

This week's action was a little lighter than usual, but that was to be expected after the storm. Here’s to the action rebounding so we can enjoy fishing like it was. Take care, and I’ll see you around.