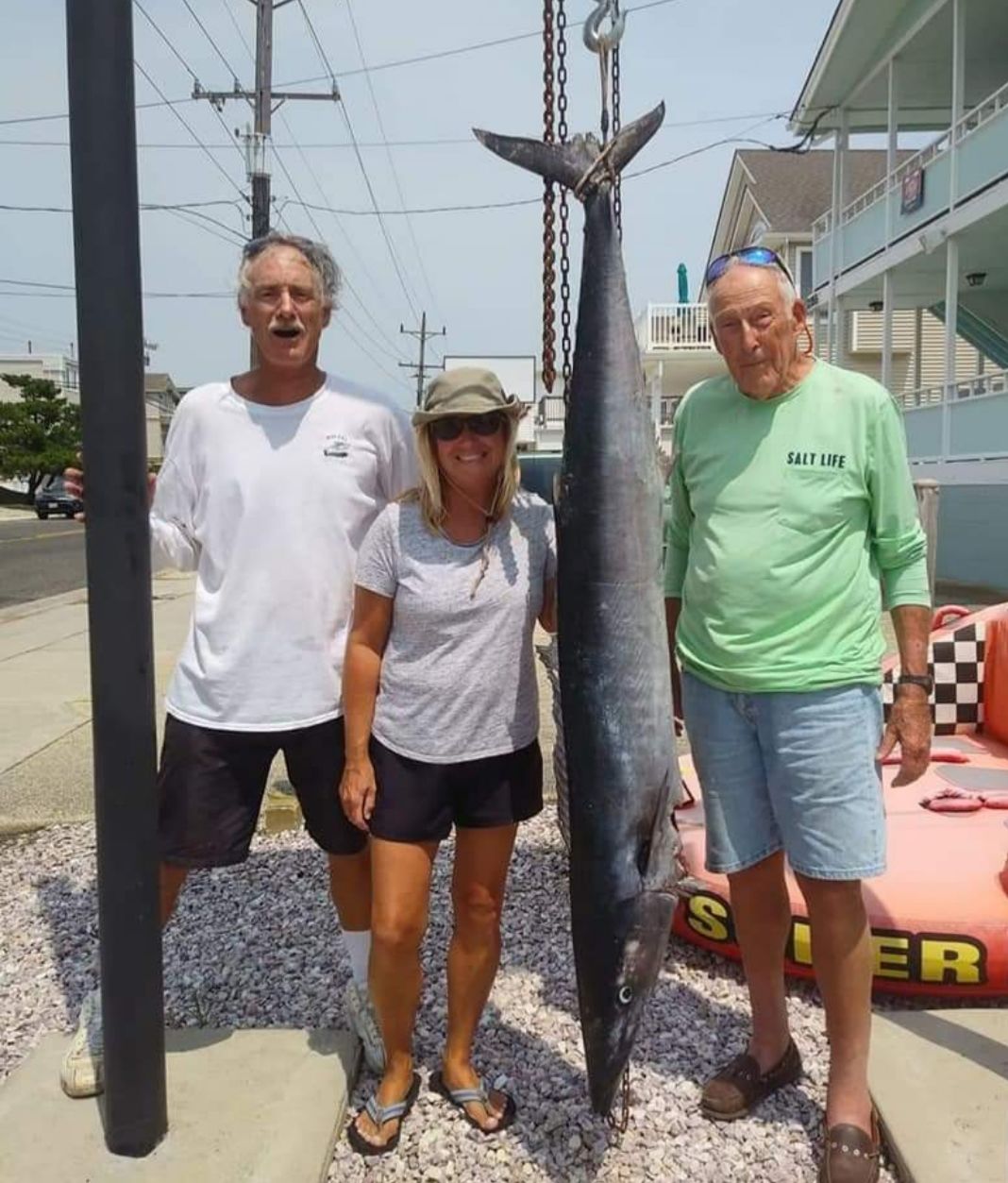 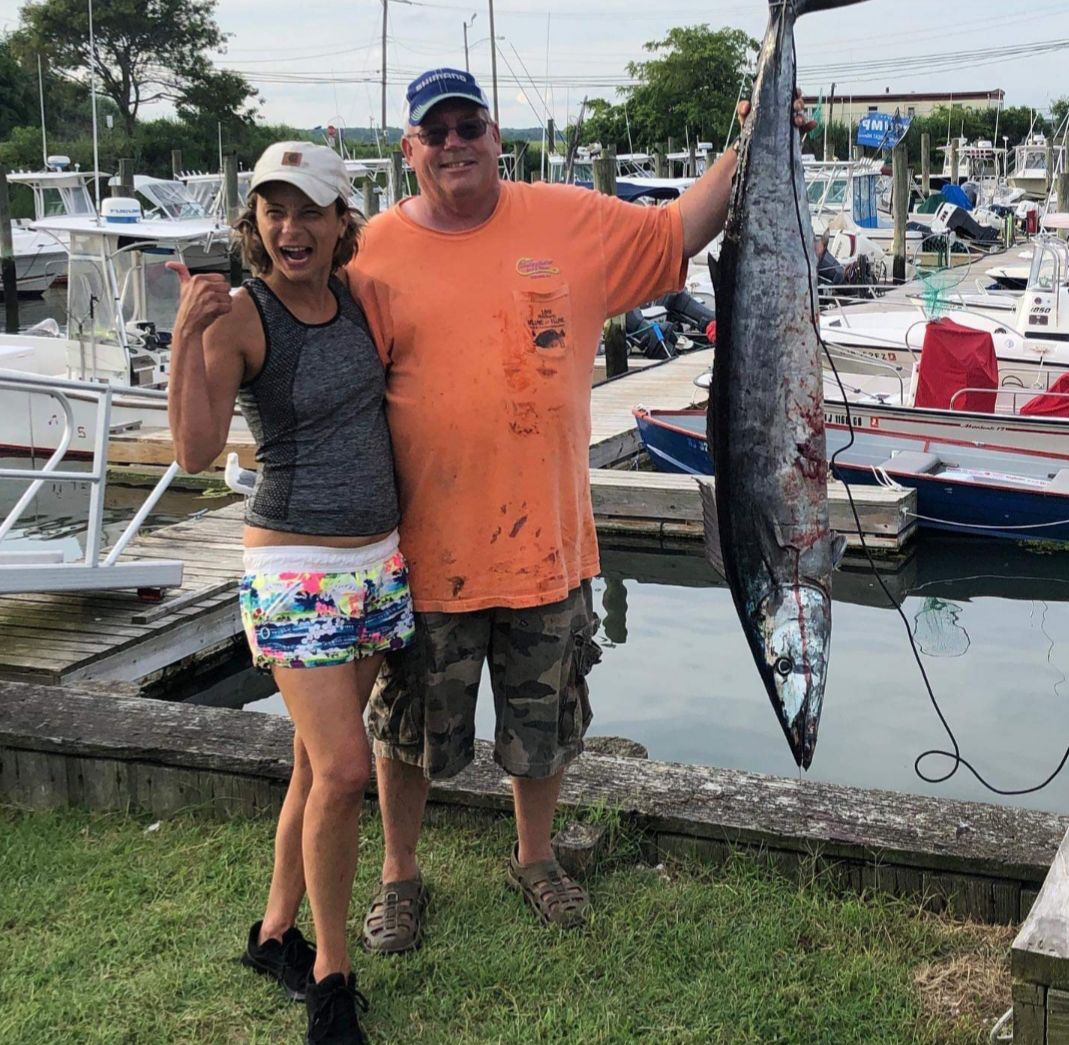 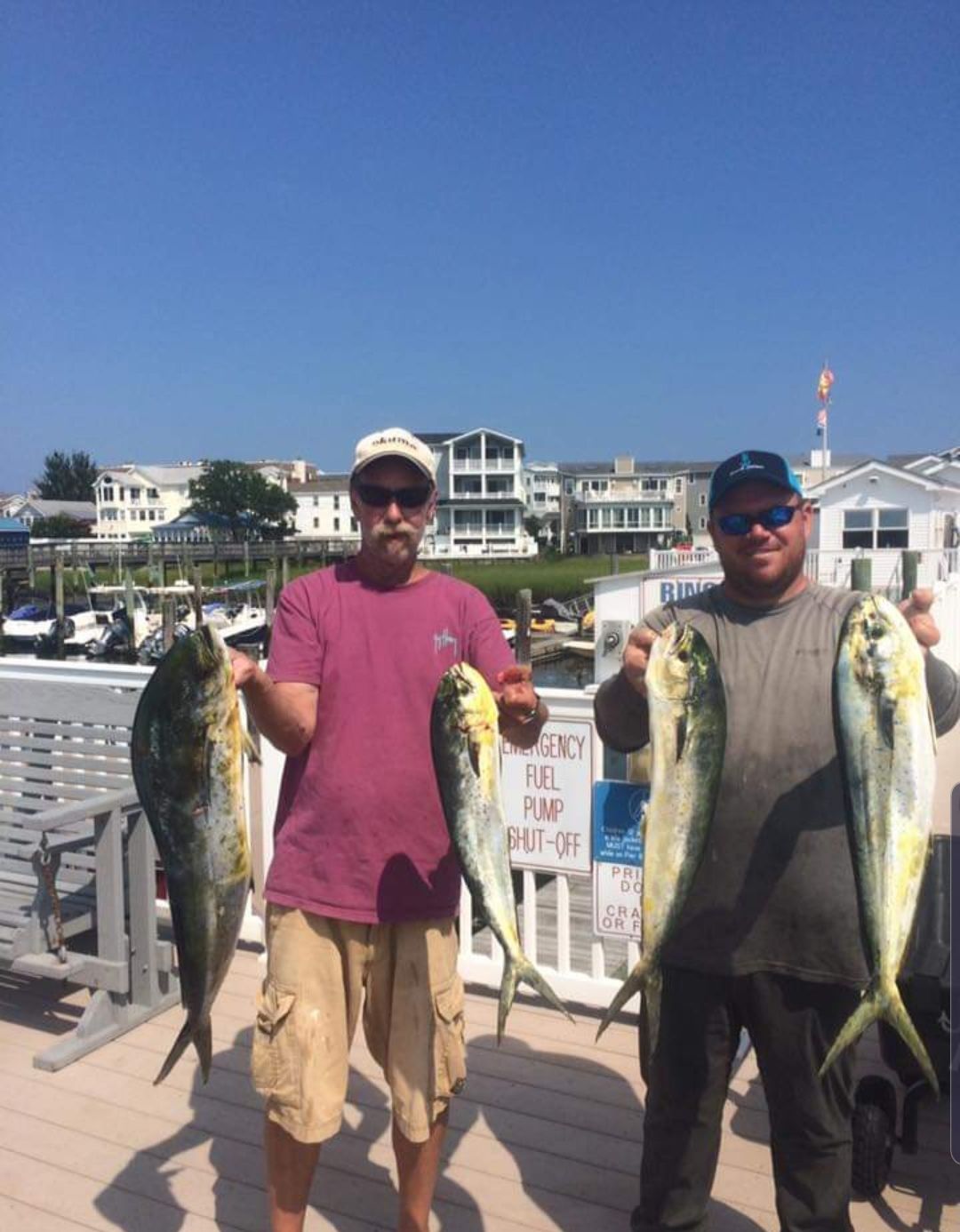 Rick (L) and Paul (R) with some tasty Mahi-Mahi. 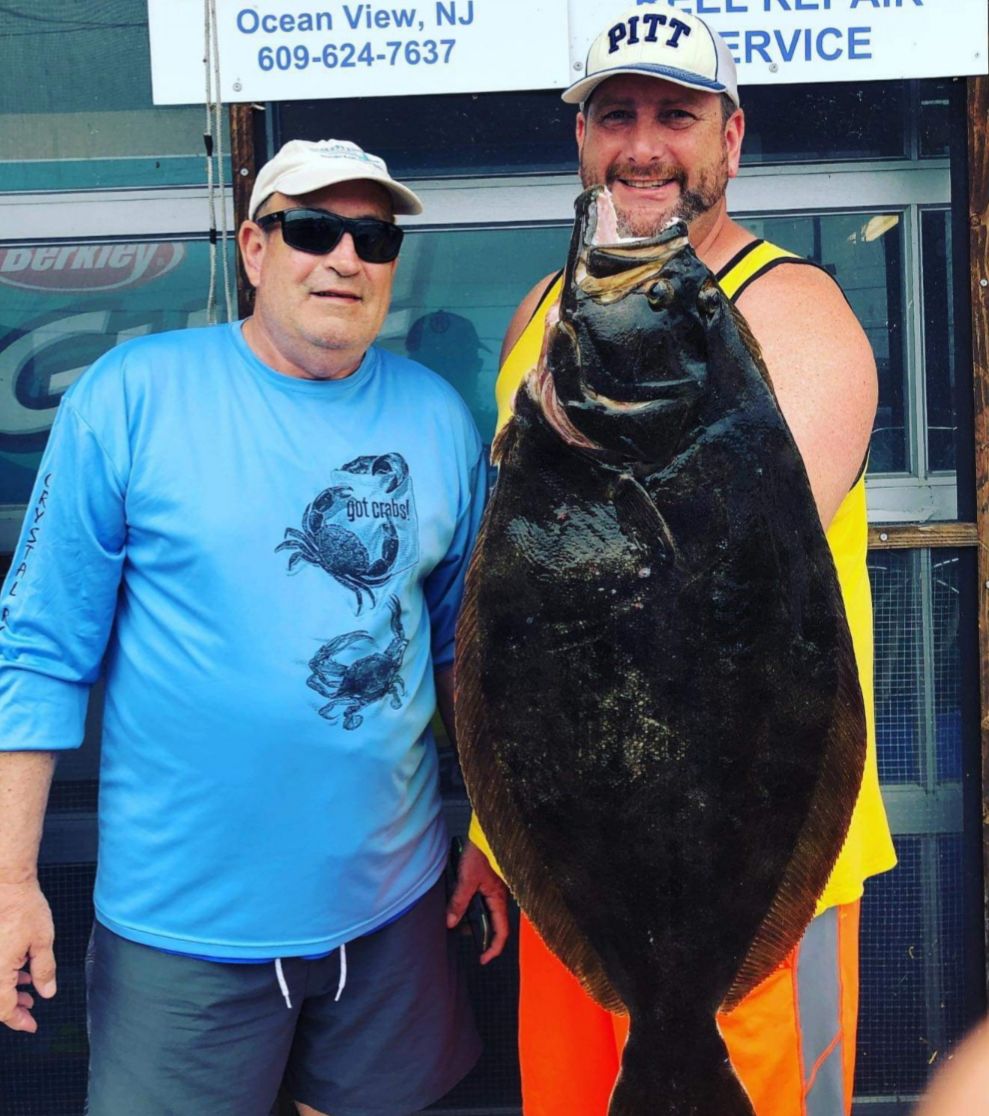 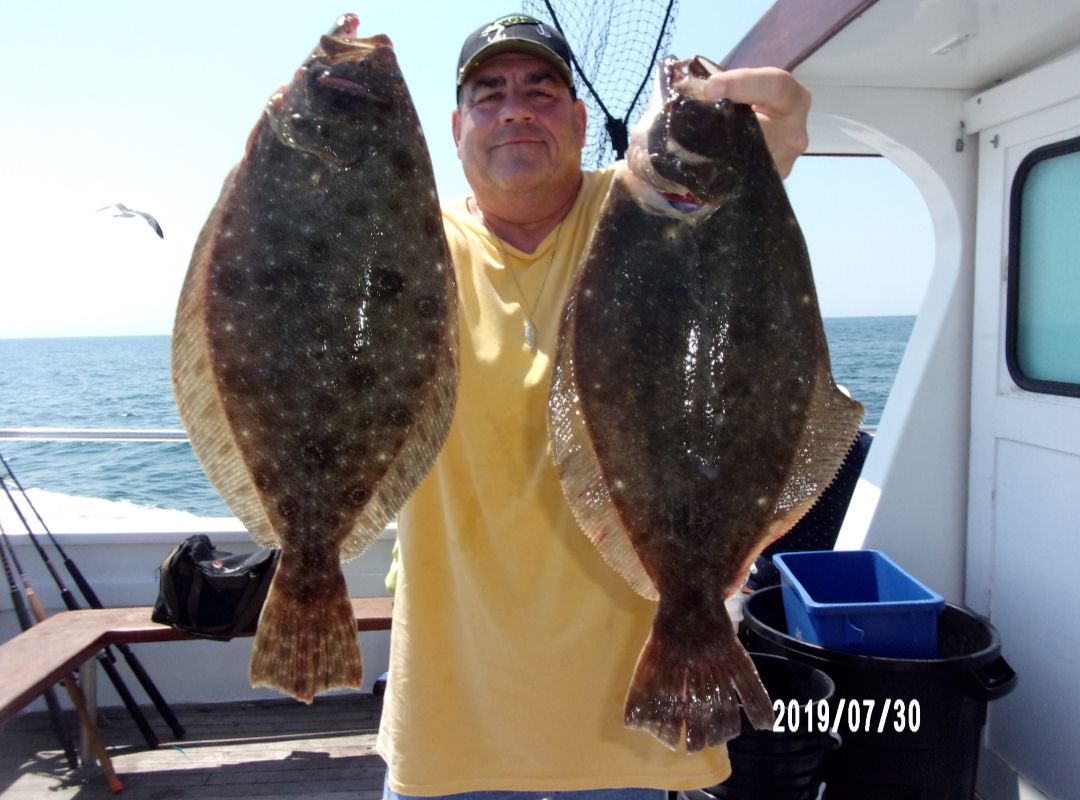 Rick (L) and Paul (R) with some tasty Mahi-Mahi.

The fish of the week seemed to be Mahi-Mahi, but Wahoo had a couple of nice contenders to finish strong. We received many reports in which Mahi were the featured fish. Bonita, mackerel, and the other regulars of flounder, sea bass and kingfish were also active so there was plenty of action to go around. Let’s check out what transpired.

Boulevard Bait and Tackle has a new leader in the flounder category of their yearly fishing tournament. Dan Erdie walked in on Friday and weighed in a 27.25-inch, 7.34-pound fluke. It was an example of some of the quality back bay fish that are still around.

The Avalon Lady is another boat that is still finding nice fluke in the back. A nice keeper was caught by a young lady angler on Thursday. They have been venturing to Townsends Inlet also were they have been catching keeper fluke, plus sea bass, weakfish and kingfish.

The Miss Avalon has had their patrons doing the boats “kiss the fish” tradition a lot recently. When you catch your flounder, kingfish, sea bass, weakfish or triggerfish be prepared to pucker up. They have been catching those recently and enjoying the “calm seas and cool breezes.” They are fishing two trips daily at 8 a.m. and 1 p.m. They have one, 5-hour trip on Sunday. Call 609-967-7455 for more information.

Avalon Hodge Podge had the scales buzzing as some nice catches came in. A couple of nice flounder, a 27.75-inch, 8.79-pounder for Bob Scully, and a 24-inch, 5.46-pound fish for Joe of Sugarloaf, Pennsylvania got things going. In between those weigh-ins came something much larger. It was a 70-pound, 6-foot long wahoo that was caught by Dave Appenzeller who was fishing on the Irish Rose with Captain Frank McLaughlin. Two other points of interest that were passed along were a 47-inch Hound fish that was caught by Mike at a local reef, and a productive day for Captain Tim McGuire and the crew of the Pequod who loaded up on Mahi-Mahi.

First Fish Adventures was busy with trips that resulted in plenty of Bonita, for the Teddy Zeller party, some tasty Mahi-Mahi for Rick Shetler and Paul Black, some Bonita and a young Black-tip shark for T.J. Hewitt and his parents, Tom and Linda, and some Mahi and mackerel for Paul Black and David Ericson.

Sterling Harbor Bait and Tackle, with Cathy checking in, reports that flounder fishing “is finally getting better with the summer weather we are experiencing.” The “hot spots” recently were McCrie Shoal and the Cape May Reef. Doug Abrams weighed in a 6.26-pound flounder he caught at McCries. The crew of the Tara Anne was fishing outside the Cold Spring Inlet when they caught a 5.04-pound triggerfish.

Anglers who have been trolling inshore “a having a blast” catching bluefish, Bonita, some Spanish mackerel and some King Mackerel. “Some spots” recommended to troll are the Five Fathom Bank, 2 FB and near the Cape May Rips. Josh Nau caught a 12.56-pound Mahi-Mahi that he caught while trolling the 20 Fathom Line.

Looking offshore shows that anglers there are doing better with White Marlin and Mahi-Mahi, while still catching “a few tuna” even though the tuna bite has slowed considerably.

Surf anglers are “doing well” with kingfish plus there also some small bluefish being taken.

The Sailor’s Delight has been staying busy catching “mud marlins”, or flounder on every trip. They’ve had keepers, plus a lot of shorts. They are also catching bluefish and kingfish so there has been plenty of action. As Captains Paul and Stan pointed out, “children are the future of our sport.” With that thought, now is the time to introduce the kids in your life to fishing. And while you’re at it, grab a pole also.

The Cape May Lady is sailing two trips daily at 8 a.m. and 1 p.m. They reported on one of their recent trips that the big fluke of the day “was just over 5-pounds”. Hope on, get a seat, and go catch your dinner.

Grassy Sound Marina said that 16-year old Megan Finnegan had a “first offshore trip” that “did not disappoint”. The crew of Josh, Bobby, Jim and Megan came home with 6 “beautiful” Mahi plus 7 sea bass. Others who tasted success were the Dailey crew who caught 7 keeper fluke to 24-inches, a sea bass and an angel shark and the duo of Josh Nau and Bobby Finnegan who were kept “busy” with some “nice” Mahi. Finally, not to be outdone, the Tomeks grabbed their traps and proceeded to catch 4-dozen tasty crabs.

The Sea Star III changed tactics this week. Instead of hitting the reefs, they found fish on the open bottom. They were rewarded with plenty of action from keepers, as well as shorts, plus some keeper sea bass. One sea bass, a 1.5-pounder, caught by Ed Barnes was a pool winner.

The Porgy IV has been staying busy. A nice highlight went to 11-year old John Diamond who landed his first keeper flounder during a recent trip. A 6-pound pool winner was caught by Brian Pichalsky while Bob Brett won two pools with 4.0 and 4.5-pound fluke. Buck Ballinger went home with a pool as his 4.5-pound fish was the largest that day while a split-pool went to Ryan DeRock and Jim Stewart who matched weights with 5-pound fish. Other pool-winners were Gary Robinson with a 23-incher and Linda Martin who was visiting from Florida. Limits, among many, were caught with Bill Ash, Young Lee, Andrew Bergholt and Mike Manley.

Captain Mike, of the Miss Chris, reports that there was a “good fluke bite out front early in the week.” As the week progressed, they moved to the Point where there was a “mixed bag” of bluefish, kingfish, and weakfish. One picture showed multiple happy anglers with their fluke.

The Cape Queen took the Ross Alber party out recently for a morning outing. They returned with “their share of King Mackerel and a false albacore.” That’s a good morning of fishing action.

Off The Hook Bait and Tackle reported that Bill Stewart weighed in a 44.05-pound wahoo over the weekend.

Jim’s Bait and Tackle reported that an angler, named Phil, stopped in with a cobia. After hitting the scale, it weighed in at 45-pounds.