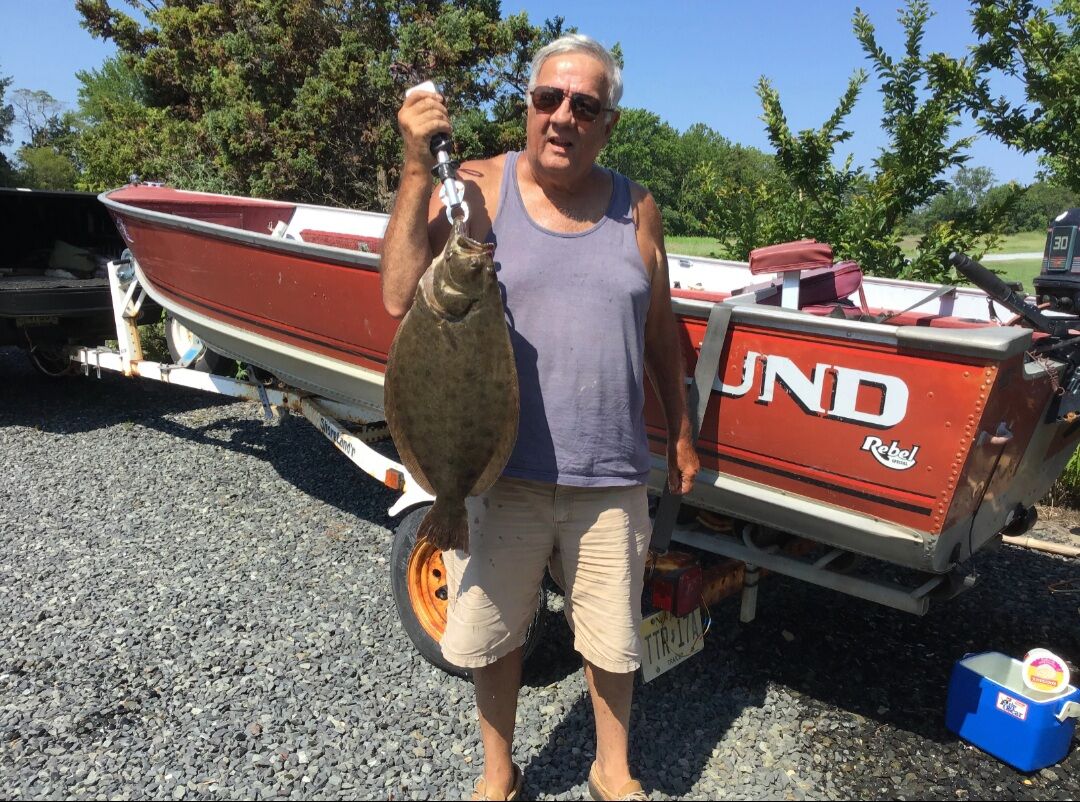 Glenn Kaempf and his 27-inch flounder. 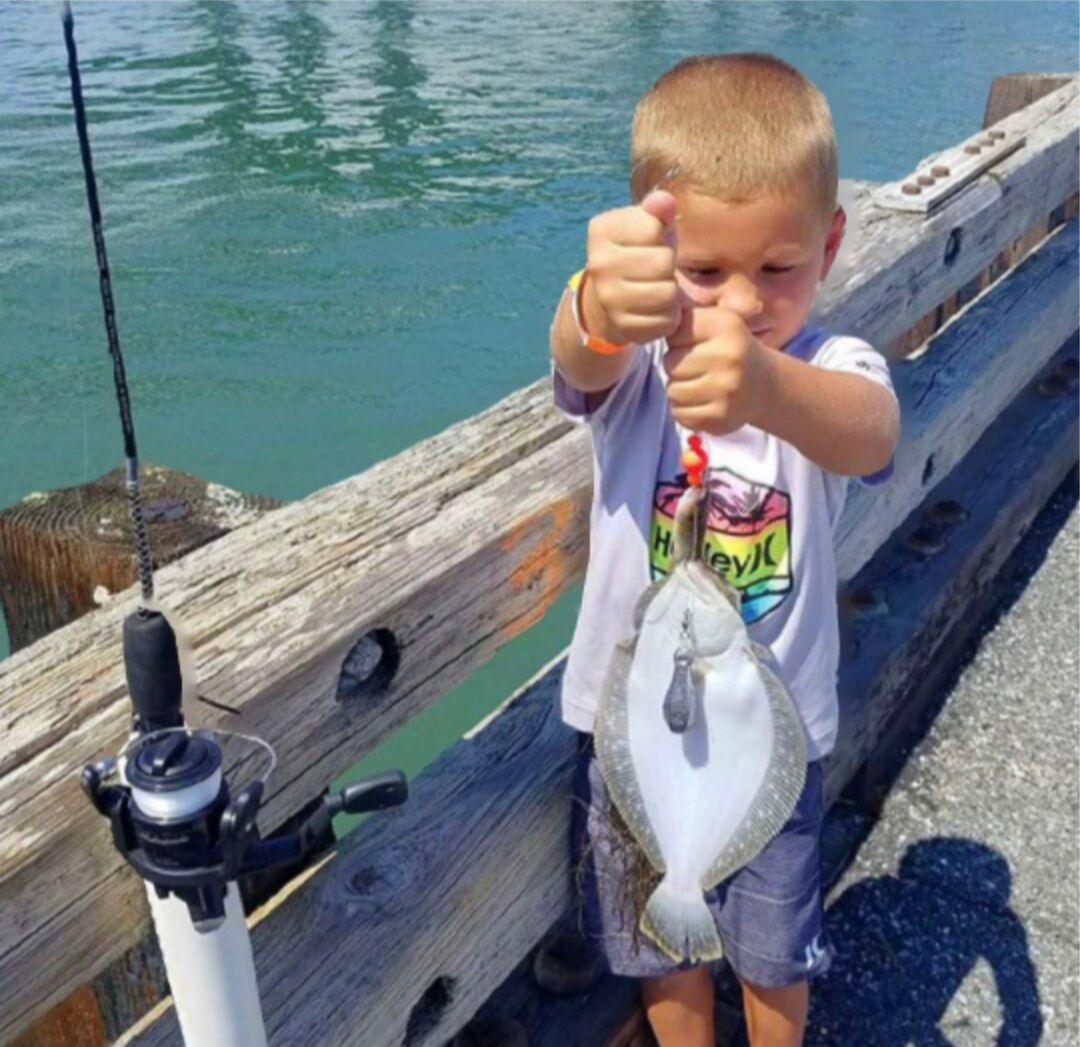 5-year-old Easton and his first fish. 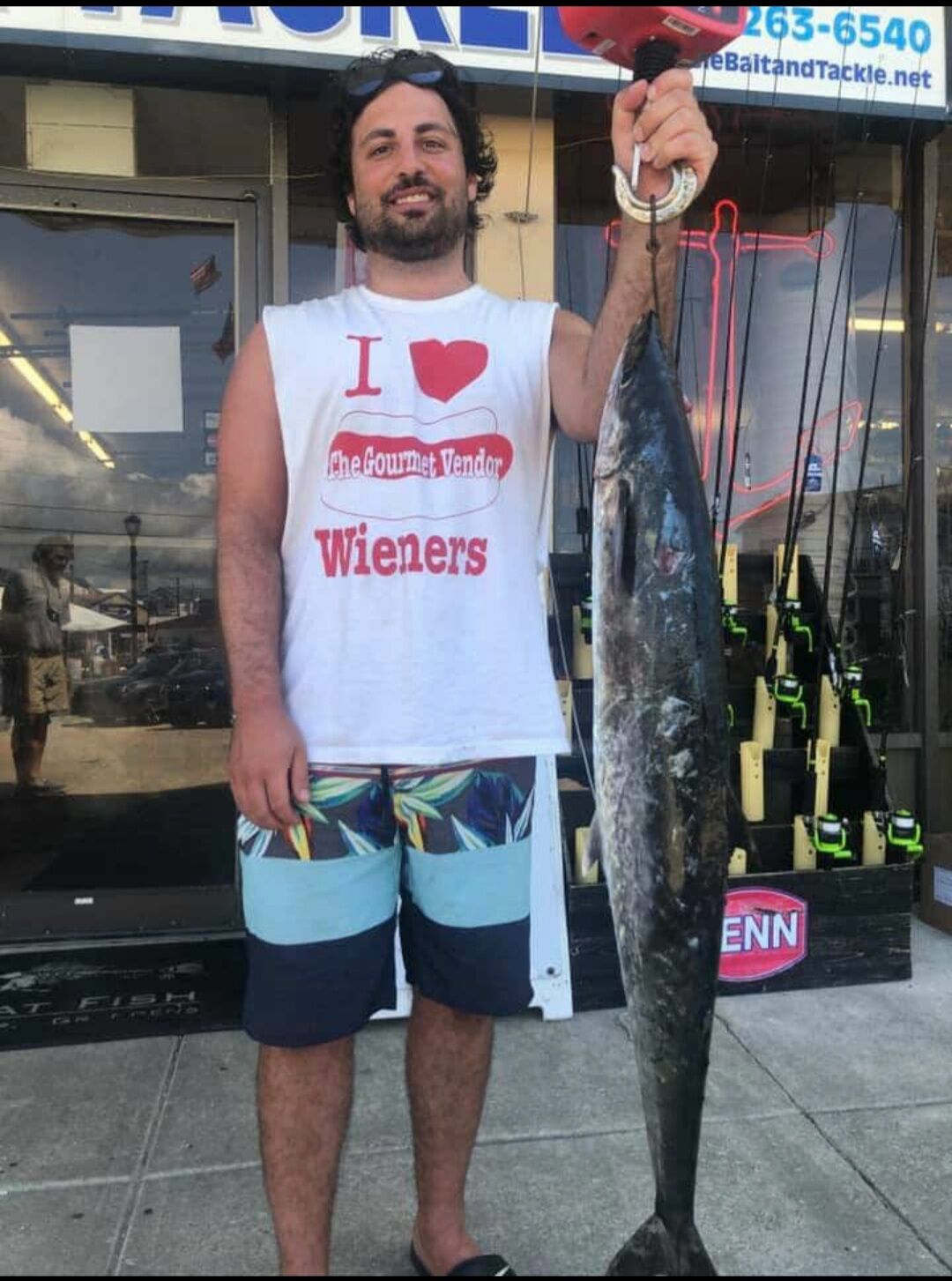 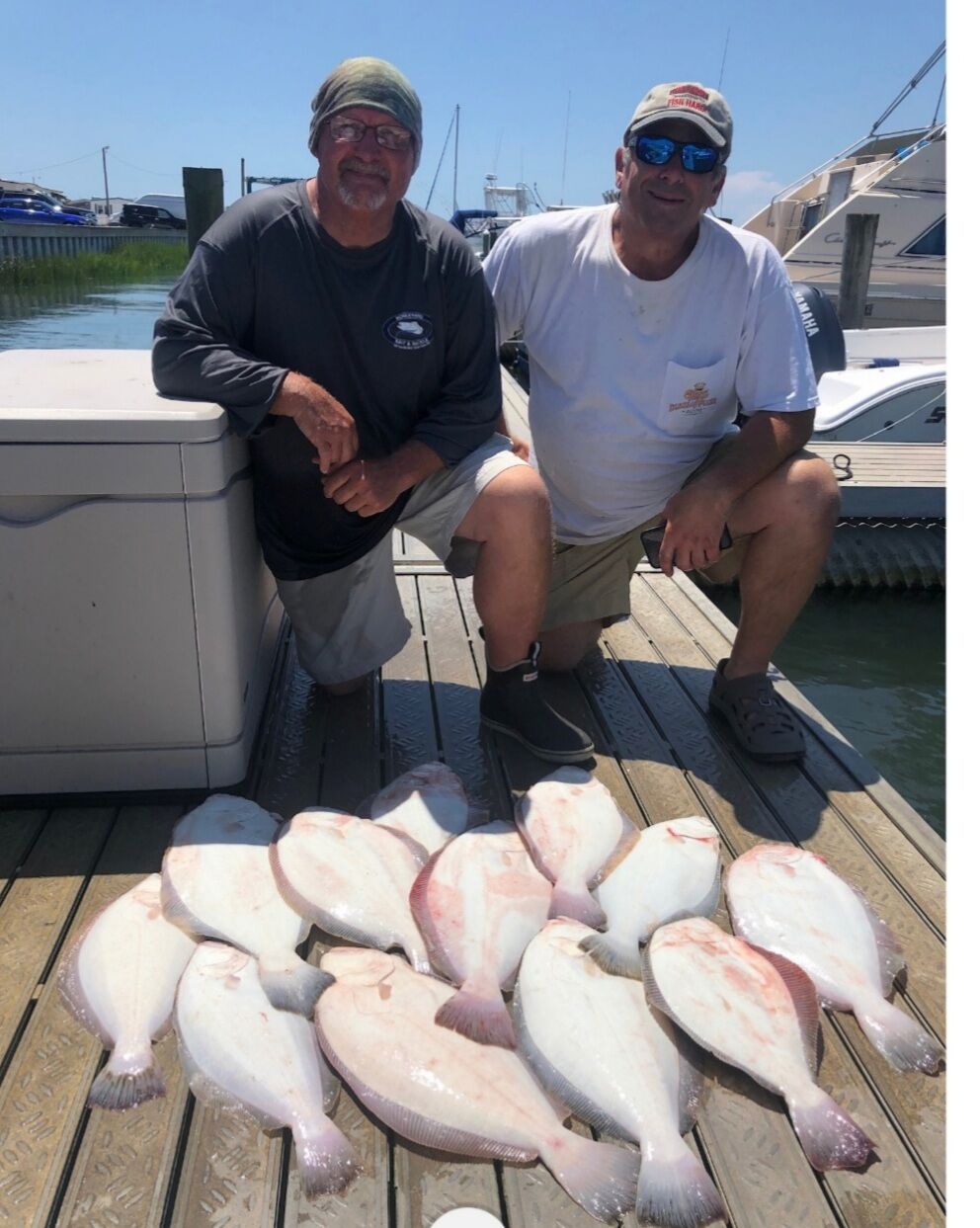 A nice catch of flounder for Scott Wheeler and crew.

With a tip of the hat to Yogi Berra, I’m going to borrow one of his famous quotes: “It’s deja vu all over again.”

The sunny, steamy and sometimes stormy weather continued. Thankfully, the fishing is following suit as it remains just as hot.

The area's waters, in the back bay or ocean, are currently highly productive. The regular local summer fish population is being joined by Spanish and king mackerel, wahoo, mahi-mahi and black drum - yes, even drumfish. Let’s review the week and the highlights.

Capt. Al, of Bayhound Charters Light Tackle Sportfishing, along with his son, Jimmy, has been putting his charters on the fish. They’ve caught flounder, sea bass, bluefish, triggerfish and Spanish mackerel. A king mackerel was also caught during one trip and registered 14.75 pounds when it was weighed at Sea Isle Bait and Tackle.

Near the end of the previous week, they even caught a small marlin that was released boatside. Another nice catch went to an angler who added a nice keeper striper. If you want it, Capt. Al will put you on it.

The Miss Avalon was busy during the week. Plenty of flounder, which included multiple limits, kept the anglers and crew busy. Throw in some big triggerfish and some sea bass, and everything got even better. They are sailing at 8 a.m. and 1 p.m., so be on time. They also have party cruises available for you and your family or organization.

The Avalon Lady continues to catch nice keeper fluke from the back bays and channels. They also had a solid week at their summer fishing camp. The rain on Friday didn’t deter the campers' enthusiasm, as sea robin, sharks, and spot joined the flounder that were caught. They are also running crabbing trips that are described as “hot."

The Starfish is sailing daily at 8 a.m. and 1 p.m. Flounder, sea bass and triggerfish are the main catches. They also sail Thursday night “Happy Hour” cruises. Give them a call to set up an outing.

Capt. Zig, at First Fish Adventures, has been busy putting his patrons on flounder. He also changed the primary prey of choice recently during a family outing.

PB3, a young family angler, provided dinner by landing a couple of nice mahi-mahi. Cobia are also on the list of desired fish for this young man. We’ll keep you updated on his efforts to land one, or more.

Boulevard Bait and Tackle continued registering nice flounder catches. One group stopped in with 10 keepers and two nice sea bass after their day at the local reefs. Another trip of note went to Shawn and Tucker. They, too, were at the reefs, and each totaled a limit, with the biggest weighing 5.8 pounds.

Avalon Hodge Podge weighed a 5-pound fluke for an angler named Lou. He was fishing with a friend at the Wildwood Reef.

The Porgy IV has had a steady haul of quality flounder. Many were in the 23-inch or more range. Pool winners with fish in that range were Craig Constantino, Joe Landis, who also had two limits during the week, plus his 4-pounder, and Tom Sebastian, who also limited out while winning. The two largest pool fish though went to Al Pavlichko and his 6.5-pound fish and Ken Cockerill, who bested him by weighing a 6.75-pound winner.

Capt. Mike reported that The Miss Chris has yielded solid fishing on their twice-daily, four-hour trips. In the report, he mentioned that more fluke are being caught. Pools were won by Carol Myer, with a 19-inch fluke, and 10-year-old Jimmy Holstead, who landed a 20-inch fish. Anglers are also filling their coolers with kingfish, weakfish and croakers.

The Sea Star III had another “good week,” as flounder ruled again. Capt. Chuck reports “many” nice-sized fluke, as well as some three-fish limits being caught. Limits and fluke go together well.

The Cape Queen hosted the Gleason party, who chose to go shark fishing in the Delaware Bay. They were rewarded by getting six sharks to the boat before releasing them. The biggest was estimated to be around the 200-pound mark.

The Saville family went for a flounder, sea bass trip. They returned to the dock with seven keeper flounder and two sea bass. Alex had the “hottest hand” that day.

Capt. Tom, from the Fishin’ Fever, continues to run successful flounder outings. He has also had solid tuna outings. The pick slowed slightly, but tuna still cleared the rail.

Full Ahead Sport Fishing had a great week. Capt. Bob has been putting his patrons in a position to register solid numbers and nice fish. Some of the fish have been in the 5-to 6-pound range, with more between 3 to 4 pounds. Several limits were also recorded.

Cape May Bait and Tackle reports that there are plenty of weakfish, croakers and kingfish being caught from the Cape May beaches. Also, if you toss small metal lures with small white teasers, you could catch bluefish or Spanish mackerel during your beach outing.

Stripers up to 28-inches are being reported by anglers as they fish the back bays and around the Cape May harbor vicinity. The Wildwood and Cape May Reefs have been providing keeper fluke. Minnows, Gulp and squid are the top baits.

The offshore bite is still strong, with yellowfin tuna being caught at the Wilmington and Spencer Canyons. Trolling has led to some White Marlin being caught, while mahi-mahi are being picked up around the various pots.

Crabbing for blue claws in the back bays is great, so try to get out and try it.

The Sailors Delight Back Bay Fishing boat is busy with three daily trips. All have been providing plenty of flounder action and nice keepers for their patrons. They have also been catching weakfish and kingfish recently, so try to get on one as soon as possible.

The Cape May Lady is running specialty trips in addition to their regular schedule. Some are for tuna, while some are for tilefish. Call ahead to see what and when they are heading out.

Sterling Harbor Bait and Tackle reported a great flounder trip for Scott Wheeler and the crew of his boat, the Big Bone. They caught a four-man limit during their trip to a local reef.

Also being mentioned was that Tom and Andrea D’Alfonso were trolling at the inshore lumps on their boat, the Reel Trouble. During that outing, they landed an 80-pound wahoo.

Grassy Sound Marina reported that 5-year-old Easton Bates was recently on his first fishing trip. He celebrated it by catching his first fish, a flounder. Congratulations, Easton, on that first catch. Pardon the pun, but Easton, you are now hooked.

Grayson celebrated his eighth birthday by going to the pier and catching some crabs and flounder. Happy birthday, Grayson.

A thank you goes to readers Glenn Kaempf, for submitting a report and picture of his 27-inch flounder caught from a local back bay, and Mike Ipri, for the picture of his drum fish. It appeared to have been caught at an unidentified local beach.

As this busy week concludes, we hope it leads into another. Get out, get fishing, and I’ll see you around.