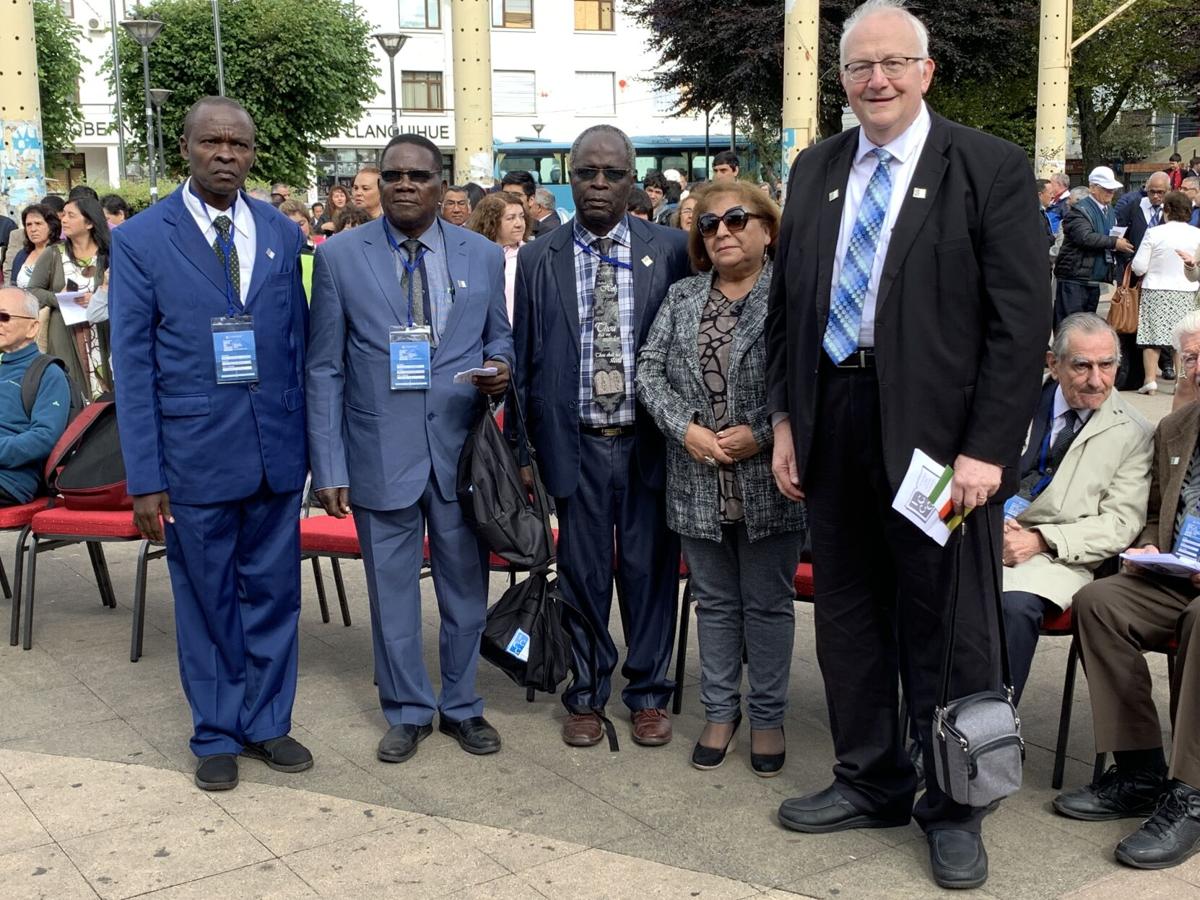 Dr. Brad Gsell, far left, is the president of the Interntaional Council of Christian Churches and was an employee of Rev. Carl McIntire. 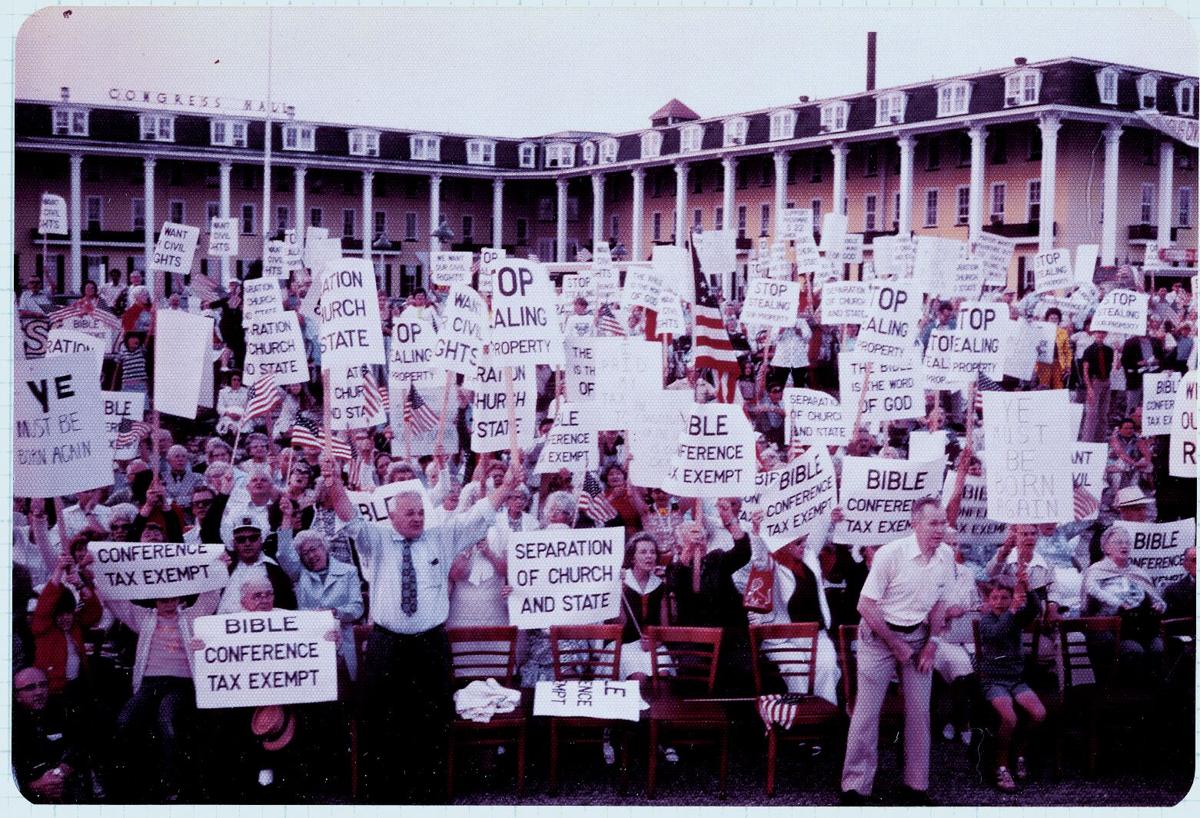 This is the third in a three-part series examining the life of Rev. Carl McIntire.

CAPE MAY – “What a day. What a testimony. What a glory,” Rev. Carl McIntire is remembered saying, in fall 1973.

Aboard a former Navy minesweeper, McIntire and a small crew sat 3 miles off the coast of Cape May, launching his radio broadcast. Although the ship was leaky and had a host of mechanical problems, a 100-foot radio mast stood on deck. The airwaves crackled with the sound of McIntire’s voice.

What was a preacher doing out on the open sea? Freedom of speech compelled McIntire to liberate his broadcast from the Federal Communications Commission (FCC). He called the endeavor “Radio Free America,” although it lasted only 10 hours.

McIntire’s political activities shine a light on the continuing divide in America and the “Christian right.”

Before the ink dried on the Declaration of Independence, many Americans believed God chose the U.S., setting them aside for a special purpose.

Growing up in the Presbyterian tradition, McIntire held to that belief. He believed Christians should speak against evil in all its forms.

“You go to church to hear what the Bible says, and when the Bible deals with the civil magistrate and the Bible deals with these great moral questions, we are going to speak of them here. You cannot evade them, and it is the duty of the pastor and the preacher to get up and say so,” McIntire wrote, in 1980 (https://bit.ly/34os0Wr).  Christ’s cross and the ballot box comprised his principles.

During the 1960s and '70s, the America of McIntire’s youth transformed forever. Civil rights, the hippie movement, and the Vietnam War left many conservative Christians alarmed. Tradition and adherence to “the old-time religion” became less of a cultural force.

“I have said now for 25 years, let us put more Christianity into the patriot and more patriotism in the Christian,” McIntire wrote.

The Christian Admiral, along with Congress Hall, was more than a genteel, wholesome retreat. The Victorian architecture harkened back to simpler times, becoming a symbol of an endangered, virtuous America.

One’s legacy is open to debate, as future generations examine the past. Did McIntire have racist views? Did he undermine Cape May’s stability?

Dr. Brad Gsell, a former employee and friend, remembers McIntire as a man of conscience and kindness.

“His goal was like those who founded our country,” Gsell said, in an Oct. 2 phone interview. He said McIntire believed the same as John Witherspoon, the revolutionary president of Princeton University, and William Penn, the Quaker founder of Pennsylvania.

“God gave man a conscience, and it should be free,” Gsell said.

The early fundamentalist movement included Baptists, Methodists, Presbyterians, and Lutherans. The ministers who left their denominations lost their friends, positions, and livelihoods. According to Gsell, McIntire applied Biblical truth to every area of life, including politics.

“People tried to position him as a Catholic-hater and anti-Semitic, but just because he thought things were sinful, that doesn’t mean he was a hatemonger,” grandson Curtis Bashaw said, in previous comments. Bashaw, businessman and owner of Congress Hall, said his grandfather understood people, even raising funds for Israel during the Six-Day War.

In the 1930s, McIntire denounced Nazism and the slaughter of Jews in concentration camps. He gave a sermon, in 1938, urging the Collingswood congregation to pray for Jews suffering in Europe.

“The outside world knows nothing of the pain in the heart of American Jews for the sufferings of their brethren in other lands,” McIntire said, in his sermon (https://bit.ly/2IRKk1Q). He was 36 years old when America entered the conflict, in December 1942.

McIntire longed for Jews to believe in Jesus Christ as the Messiah, the promised deliverer of Israel as foretold by prophets in the Old Testament.

“Jesus Christ was a Jew. Jesus Christ is a Jew today,” McIntire wrote. He believed America would continue to prosper as she honored Israel, quoting Genesis 3:12: “And I will bless them that bless thee, and curse him that curseth thee."

Critics point to a cartoon in an issue of The Christian Beacon, McIntire’s newsletter, depicting a white doll speaking with a Black doll. The African American doll’s words are portrayed in stereotypical speech.

Although vocal in his support of equal rights, McIntire spoke against interracial marriages and leaders in the civil rights movement. Protests and violence were abhorred, although McIntire led marches and protests of his own.

However, in 1945, he stood with the African American members of New Central Baptist Church, in Philadelphia, when their broadcast was replaced with “popular music.”

“You have just as much right on the air as we have. We are with you in this fight. You ought to be with us. I want to urge you colored people in the Philadelphia area... write to the Federal Communications Commission with the rest of us,” McIntire said.

According to Gsell and Bashaw, McIntire despised communism. His repugnance sprang from believing capitalism is closely tied to Scriptural commands to work.

“The Bible teaches free enterprise,” Gsell said, explaining McIntire’s position. He feared for those dependent on the state and the “tyranny of the majority.” To McIntire, the impulse to make everyone the same was the greatest threat to American democracy.

“A bureaucratic and cumbersome State cannot help jeopardizing the freedom of its citizens. The State should keep taxes from destroying the people and their property,” McIntire wrote.

One of McIntire’s greatest nemeses was the FCC and the fairness doctrine. Before the days of conservative talk radio, the FCC monitored radio broadcasts. Radio stations had to present varied political opinions or lose their license.

“Pirate radio” was not uncommon for many pastors whose message came under the fairness doctrine. Even secular, European broadcasters participated in the trade.

In 1967, McIntire’s Philadelphia-based program came under fire and was ultimately removed, in 1973. He purchased a World War II minesweeper, renamed it the “Columbus,” and prepared to launch a floating radio program offshore. Bashaw, at 12 years old, attended McIntire’s broadcast with his mother.

Anchored 3 miles off the Cape May coast, McIntire began broadcasting. Bashaw remembers his grandfather wearing a suit as he spoke over the airwaves again.

The Coast Guard came and inspected the vessel and, on the proceeding day, U.S. Justice Department and U.S. District Judge Mitchell Cohen brought an injunction against “Radio Free America.”

If McIntire had flown a foreign flag, he would have remained “untouchable” under maritime law. Flying the American flag brought him under federal jurisdiction.

According to reports, McIntire appealed the injunction but never violated the order. “Radio Free America” vanished from the airwaves for good.

McIntire continued lobbying for the protection of fundamentalist broadcasting rights and lived to see the fairness doctrine abolished, in 1987.

“Because we believe it will serve the public interest, we seek to extend to the electronic press the same First Amendment guarantees that the print media have enjoyed since our country’s inception,” FCC Chairman Dennis Patrick said, in an interview at the time.

McIntire wrote a book titled, “Author of Liberty,” outlining his defense for individual and religious liberty. Gsell remembers his mentor’s zeal and compassion.

He told the Herald of a troubled fisherman who visited McIntire, in the 1970s. According to Gsell, McIntire “prayed with and comforted the man,” giving the local fisherman his own Bible.

In Cape May, McIntire became involved in local politics, as well, standing against beach tags and other issues. City officials claimed he owed $723,000 in back taxes, and some complained about the notoriety brought by McIntire’s political activities.

Gsell and Bashaw remember McIntire’s tireless efforts to make life better and stave off tyranny from taking over the nation he loved. Until his death, at 95, McIntire continued speaking against evil and social issues. He advocated for lower taxes and a strong, American identity.

“Fundamentalists, the hour is yours,” McIntire said, during the election between Ronald Reagan and President James Carter, in 1980.

“By God's help, let us preach and pray. Let us work and win; let us give God the glory, for ‘blessed is that nation whose God is the Lord.’ Let no man stop us, let no man intimidate us,” he continued.

‘He Did Big Things’

You can't walk the streets of Cape May without tracing the steps of Rev. Carl McIntire, a man whose ministry, economic creativity, and political zeal continues to be felt to this day. From Congress Hall to the city’s Victorian “brand,”, Cape May changed under McIntire’s influence.