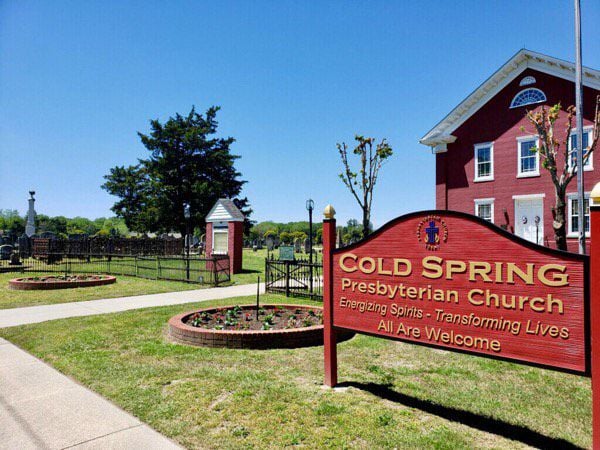 The Cold Spring Presbyterian Church, 780 Seashore Rd, Cape May. According to Elaine Jordan, the church’s historian, the church’s cemetery is the burial site of several Mayflower passengers who relocated to Cape May County. 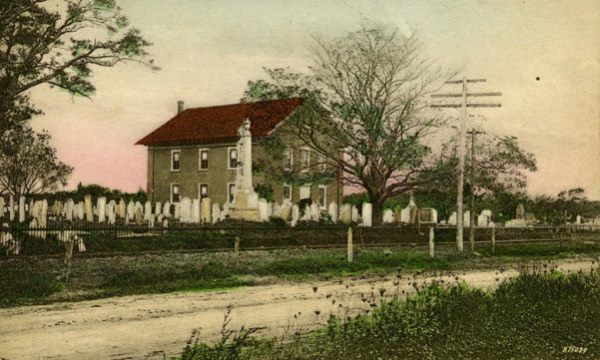 An artist’s sketch of the Cold Spring Presbyterian Church. Elaine Jordan said the church was built upon the location of a former church that burned down.

COLD SPRING – “Hopefully, we will come through this (coronavirus),” Elaine Jordan said, in a March 31 phone interview. Jordan reflected on the history of the Presbyterians in Lower Township; through war, social upheaval, and epidemics, the pioneers of Cold Spring show that faith matters.

Jordan, a Court House resident, gives tours of the historic red-brick church in summer and serves as “in-house” historian.

“My part (tour) is the congregation and building,” she said.

The red-brick church, erected in 1823, was built upon an earlier structure that burned down. According to Jordan, an earlier meeting house was built in 1762.

“It (original building) was probably a log cabin,” she added.

The historic cemetery also adds depth to the Presbyterian story. According to Jordan, many settlers buried there are direct descendants of the Mayflower passengers who landed at Plymouth Rock, in 1620. Names such as Hand and Spicer reveal deep roots in Lower Township.

Jordan revealed a mystery in the cemetery. A large, common grave shelters the remains of victims of the 1832 cholera epidemic.

“We don’t know who’s buried there or how many there are,” Jordan said.

Why would New England settlers come to Cape May County?

According to Jordan, the whaling industry was a big attraction, as well as religious liberty. Presbyterians were dissenters, separate from the established state Church of England (Anglican). The Puritans – the Anglican Church's purist group – did not welcome Presbyterians into their colony.

According to historical record, Anglican Church leaders were wary of the emotion displayed in Presbyterian worship, although their Protestant beliefs were similar.

Jordan said an exact settling date is not known, but services were held, in Coxe Hall, from 1714-1718.

What makes someone a Presbyterian?

Presbyterian comes from the word “presbytery.” Churches organize themselves under elders and pastors, and meetings are held for each Presbytery to discuss doctrine and other issues.

Presbyterians trace their roots to John Knox, a Scottish church reformer of the 1500s, and John Calvin, a French reformer. They prize education and liberty, according to Jordan, who also said the settlers of Cold Spring supported and participated in the American Revolution.

The issue of slavery caused a mix reaction. The historic church possesses an upper gallery, where slaves worshiped separately from their masters.

“There was sympathy for the South,” Jordan said, referring to the Civil War era. Yet, evidence points to Cold Spring as an Underground Railroad stop.

Today, Cold Spring Presbyterian, with 80-90 members, is led by Pastor Kevin Yoho. He arrived in 2016 and, according to Linkedin.com, “is an architect of spiritual networks and as a transformation pastor at the intersection of urbanology and technology.”

“We believe that everyone deserves to experience God's love in relevant and authentic ways,” reads the church’s Facebook page.

Jordan remains hopeful as she participates in online worship services during the COVID-19 pandemic.

Those with a story of faith to share for this ongoing series should contact the writer at: rrogish@cmcherald.com.