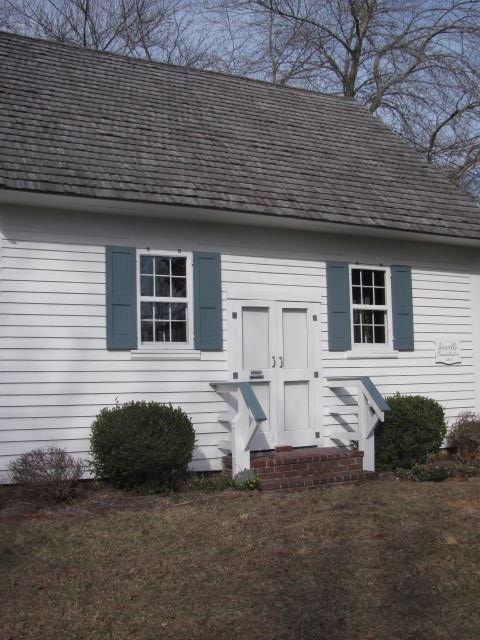 The Seaville Quaker Meeting House is the oldest and smallest continual place of worship in New Jersey. 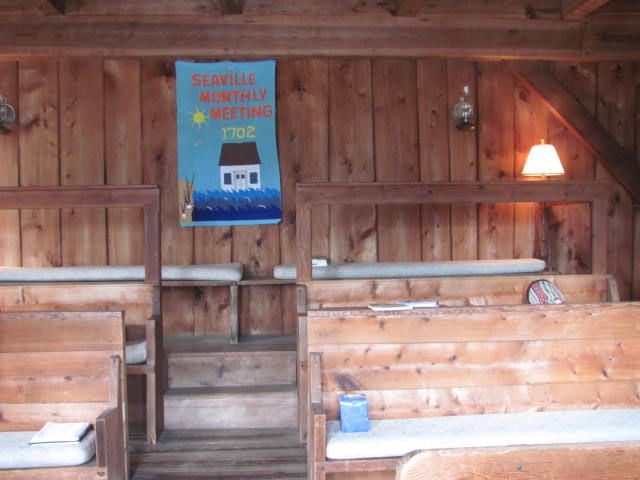 Original 18th-century benches line the front of the meetinghouse.

SEAVILLE ─ "We see the face of God in other people's faces," Anne Hainsworth said, sitting on a hand-hewn bench March 2. Hainsworth, along with her husband, Mike Hainsworth, and friend, BJ Chadwick, shared her story as modern Quakers in Cape May County.

The search for peace and acceptance is as timeless as the human heart, bridging time, culture and gender.

Officially called the Religious Society of Friends, the Quakers began under Englishman George Fox, in the mid-1600s. Turbulence in British politics and religion caused many to step away from established churches, weary of creeds and outward ritual.

According to "Faith and Practice" (published by the Philadelphia Yearly Meeting), Fox was "one of these seekers," reading the Bible and thinking in solitude.

Wandering across England, Fox sought peace for his soul. He recorded in his journal, "When all my hopes in (Christian ministers and professors) and in all men was gone, so that I had nothing outwardly to help me, nor could tell me what to do, then...I heard a voice which said 'There is one, even Christ Jesus, that can speak to thy condition.'

The revolutionary message of a personal experience with God, apart from rituals and sacraments, attracted a small group of men and women. A revival spread and the group met in the home of Judge Fell in Westmorland, England.

Leaders in the Church of England (Anglican) regarded Fox's message of simplicity as "unwelcome, heretical and treasonable," according to "Faith and Practice." Friends refused to acknowledge state authority with its established church. Persecution swiftly followed: mobs broke up meetings and vandalized meeting houses, while Friends were often arrested and even tortured until the Toleration Act of 1687.

The term "Quaker" was a derogatory nickname referring to those who "quaked" with religious fervor.

Mike Hainsworth explained the Quaker vision for peace among all peoples. Hainsworth's experience as a soldier during the Vietnam War prompted him to seek counseling over the phone. Many giving counsel were practicing Quakers.

"I've been aware of Quakers since I was a kid," Hainsworth said. "I thought they were historical."

Hainsworth did not realize Quakers still existed until his time as a social worker in Philadelphia. Hainsworth met a woman who persuaded the city to change its policy for immigrants without papers.

A Nigerian woman had begged her not to send her back after the death of her husband; the Nigerian immigrant's husband was murdered, leaving her with two children.

After the woman died, Hainsworth said he attended her funeral and learned that she was a Quaker.

"Anne followed up to see if they (Quakers) were active," Hainsworth said. He has been attending Quaker meetings for the past 10 years.

"I wanted to speak directly to God," she said. She no longer saw the purpose of a priest acting as an intermediary and longed for peace.

"I wanted quiet to commune with God," she added. "I found acceptance here (Seaville)."

According to Hainsworth, former nuns are currently part of the Seaville Meeting. Forty adult members form the meeting, with 10 to 15 average in regular attendance.

What makes a Quaker?

According to Hainsworth, Friends believe that a part of God is in everyone, leading them to refuse participation in war, respect others, provide a strong education for youth and to be truthful at all times. Communion and baptism are not observed.

Worship is conducted in silence; if one feels lead to share, they may stand and speak to the congregation. Since there are no pastors in Quakerism, a meeting clerk helps to provide guidance and structure. Hainsworth serves as clerk for the Seaville Meeting.

Built of white cedar, the Seaville Meetinghouse is the oldest continual house of worship in Cape May County and in the State of New Jersey.

Chadwick explained the meetinghouse's history, including a small mystery. Legend supposes that the structure originated in Beesley's Point and was moved to the current location in 1763-1764.

Why did Quakers come to the County?

When William Penn was granted land west of the Delaware River, Pennsylvania was founded in 1681. Penn desired to conduct a "holy experiment" - a society where all faiths and races could live in harmony, including Native Americans. West Jersey also attracted Quakers and they eventually moved south.

"They (settlers) could have been drawn by Penn," Hainsworth said.

Living out their faith is challenging at times, according to Chadwick.

Social justice is important to Quakers along with positive interactions in society, i.e. local food pantry, and helping with Family Promise.

According to Hainsworth, prominent occupations among friends include teachers and social workers. During the 1960s, Quakers rallied to the civil rights movement and still champion equality.

"We make an attempt to change it (the world) for the better," Chadwick said.

Those with a story of faith to share for this ongoing series should contact the writer at: rrogish@cmcherald.com.