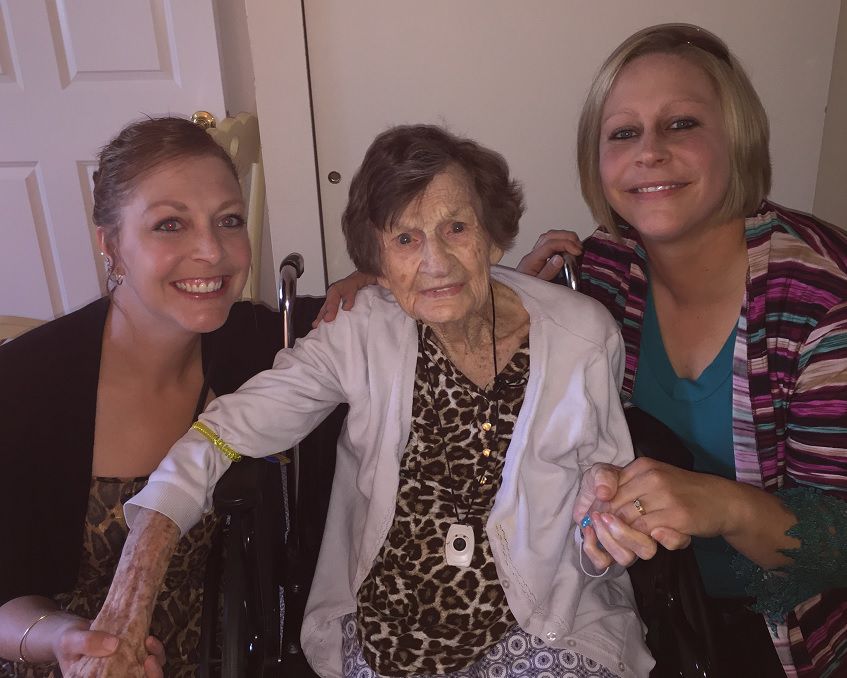 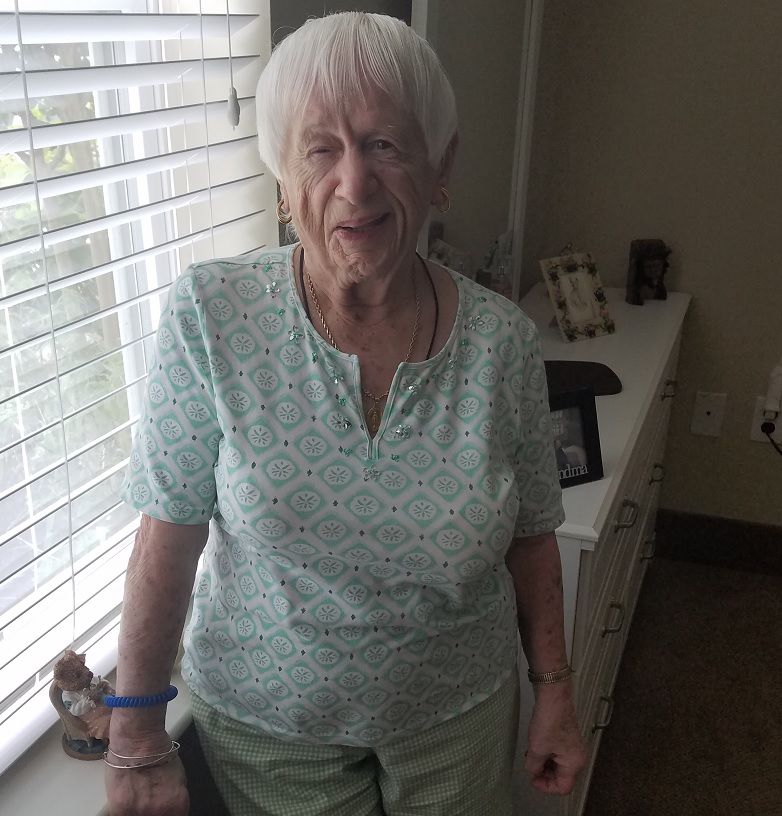 Yoland "Lonnie" Mattia turns 100 Aug. 14. She lives in the Brookdale assisted living center, where she is known for her color-coordinated outfits and shoes.

Yoland "Lonnie" Mattia turns 100 Aug. 14. She lives in the Brookdale assisted living center, where she is known for her color-coordinated outfits and shoes.

COURT HOUSE – Two residents at Brookdale Cape May Assisted Living Center who will turn 100 years old over the next several weeks credit their strong faith and belief in God as the "secret" for their longevity, something neither one ever expected.

Pauline Hall, who turns 100 July 30, is the lone survivor of seven children. She grew up in western Texas when the American flag had 48 stars. "I didn't know I had a secret to living this long," the centenarian said. "I'm just waiting for Jesus to tell me my room is ready."

Yolanda "Lonnie" Mattia, who celebrates her century Aug. 14, said she's still living "for the grace of God. I never expected to live this long, especially with all the health issues I've had."

She has survived two heart attacks (the first at age 40), cancer, removal of her appendix and spleen, and a stroke. While she uses a walker, it's mostly because her knee gets sore.

"It's not fast enough for me," she quipped.

When the women were born, the average life expectancy in the U.S. was 47. Fourteen percent of U.S. homes had bathtubs, and only 8 percent had telephones. A three-minute call from Denver to New York City cost $11.

"I remember growing up in Merkle, Texas," Hall said, as she reminisced about her youth. Her mother was German-born and her father was from Missouri, and she recalled growing up during World War II and feeling ostracized by the town's children because of her mother's German accent.

Her father worked as a telegraph operator for the railroad in town while her mother was home with the seven children, tending to their garden, feeding chickens, and milking their cow.

They had a windmill in the yard and a cistern that brought running water into the house.

"There was no grocery store in town," Hall added.

If there had been, in 1917 sugar cost four-cents a pound, eggs cost 14-cents a dozen; coffee, 15-cents a pound and butter, 43-cents a pound, according to historical information provided by the Moore County (N.C.) Historical Association.

"There was a feed store in town," she added. "It was where we bought the feed for the cow and chickens, and grain for baking bread."

Because her father worked for the railroad, the family could travel free on the train and often took overnight rides to visit relatives in Michigan and Nebraska.

Her mother would pack sandwiches for the family to eat, and they would lower their seatbacks to sleep. "It was my favorite place to go," Hall said, about visiting Michigan.

The children would arrive with blackened faces from the soot of the coal-fired locomotives.

Another one of Hall's favorite memories is the mulberry trees that were all over their property. "I remember we each got our own tree," she said of her and her siblings. "We'd climb a tree and read a book. I'd often go into the hayloft in the barn to read, to get away from everyone."

Hall also recalled that the Depression years were "good" to her family because their father retained his job. The average wage in 1917 was 22-cents an hour; the average American worker made $200-$400 a year.

In the face of falling prices, they owned one of two automobiles in town and were able to buy nice furniture for their house.

In 1917, there were about 8,000 cars in the U.S. and only 144 miles of paved road. The maximum speed limit in most cities was 10 mph, according to the Historical Association.

By the time Hall graduated from high school, World War II was going on and jobs were plentiful in the Washington, D.C., area. She went there and ended up working for the government, typing then-President Franklin Roosevelt's instructions to various generals.

It was there she met her husband, Milton, whom she married in 1942. They were married for 52 years and had four children before he died in 1994.

Over the years, she and her husband traveled a lot; but today, she enjoys visits from her family, listening to Christian music and praying.

Mattia, on the other hand, recalled "always being in some mischief" growing up, and today still considers herself an activist and feisty, someone who enjoys all the activities at the senior community home.

An avid Philadelphia Phillies baseball fan, she's been to two World Series games, attended the inauguration of President John F. Kennedy, and has been involved in Philadelphia and Cape May County politics, receiving awards recognizing her efforts.

"My mom was born two months premature," noted her son, Carl. "One of the things I've said at her previous birthdays was that she was so anxious to enter this world, but she doesn't ever want to leave. She still has things she wants to do here."

One of the activities Mattia is known for at Brookdale is for a petition she began and circulated when the management staff decided they were not going to have a TV in the living room.

Mattia, who grew up in South Philadelphia, had an older brother "who I wouldn't let get ahead of me in anything."

As a youngster, she recalled Saturday chores which included scrubbing the front steps, washing the windows on the doors, and changing the rugs with the seasons.

She also recalled ice skating on frozen lakes nearby, and playing tennis and other sports.

From the time she was 17 she was involved with various political campaigns in Philadelphia and later in Cape May County.

While registered as both a Democrat and Republican over the years, she said she supported the "person I thought would do the best job." She also encouraged women to get out and vote.

Having lived through 18 presidents, she claimed Franklin D. Roosevelt was her favorite because "he was compassionate, he understood the situation and took it by the horns and cleaned it up. He was a very intelligent man."

She met her husband while he was in Cape May playing in a band one summer. They married after war broke out in World War II in December 1941. He was a member of the National Guard at the time who was called up to the Army and got wounded during the Battle of the Bulge.

"I remember getting a letter that he was missing in action," Mattia recalled.

"What we learned was that he was unconscious after being wounded. A French farmer was walking through the land, poking at the soldiers to see if any were alive. When he was poked, he moved, and the farmer took him back to his house and cared for him for three days before they were able to get him to a military hospital.

"I actually got a letter from him telling me he was okay before the War Department let me know."

While raising two children, she worked for various banks before retiring. The couple bought a summer home in North Cape May in 1967, and moved to Florida after they retired. She was married almost 60 years.

"I remember my mother teaching us gymnastics," her son added. "She would show us how to stand on our heads. Today she uses the walker, but it's not fast enough for her."

"I still think of myself as an activist," said the centenarian. "I'm always asking why or why not, and pushing to get the right thing done."