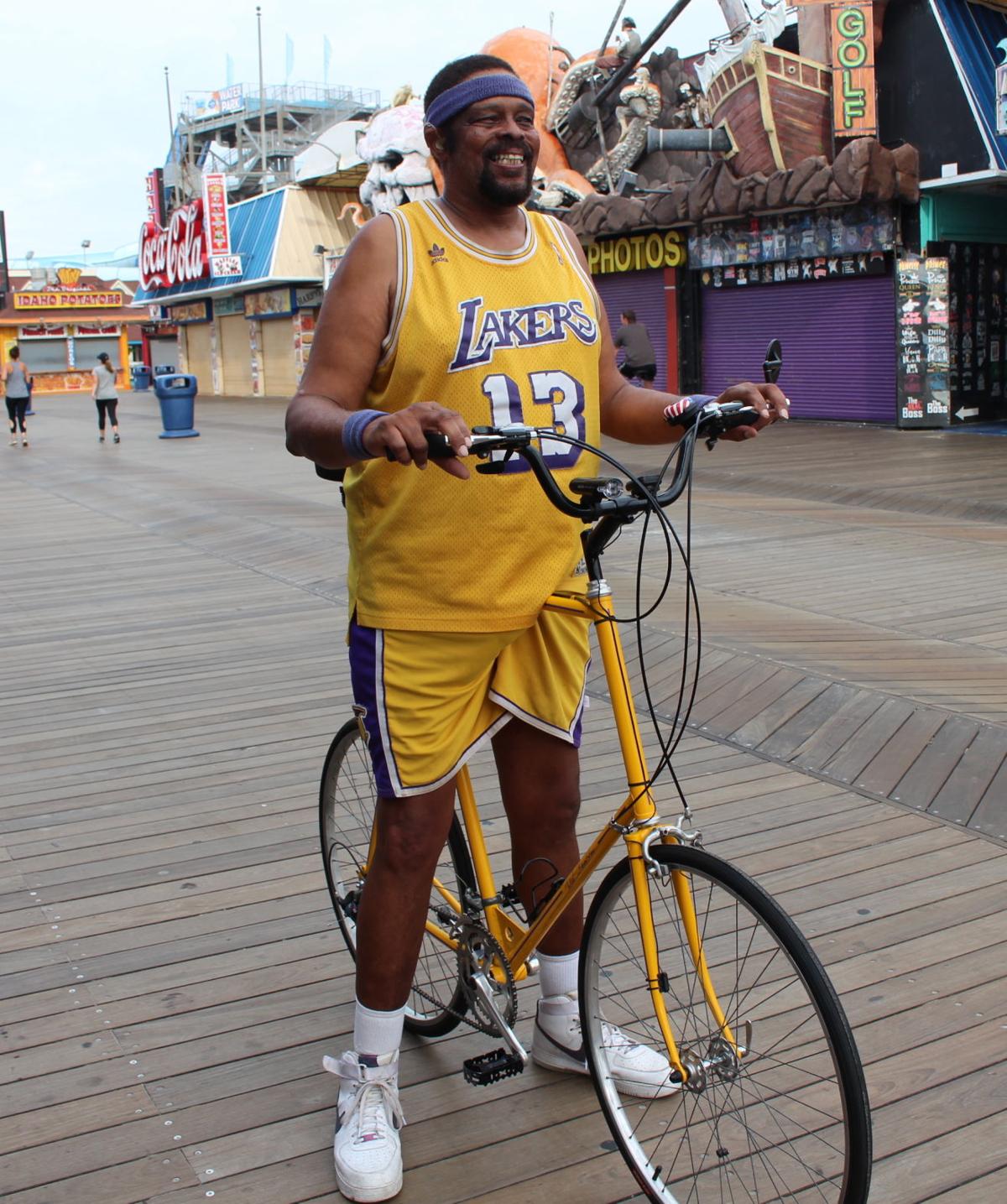 Wilmont Jones sits on his newly restored bike for the first time on the Wildwood Boardwalk June 6. 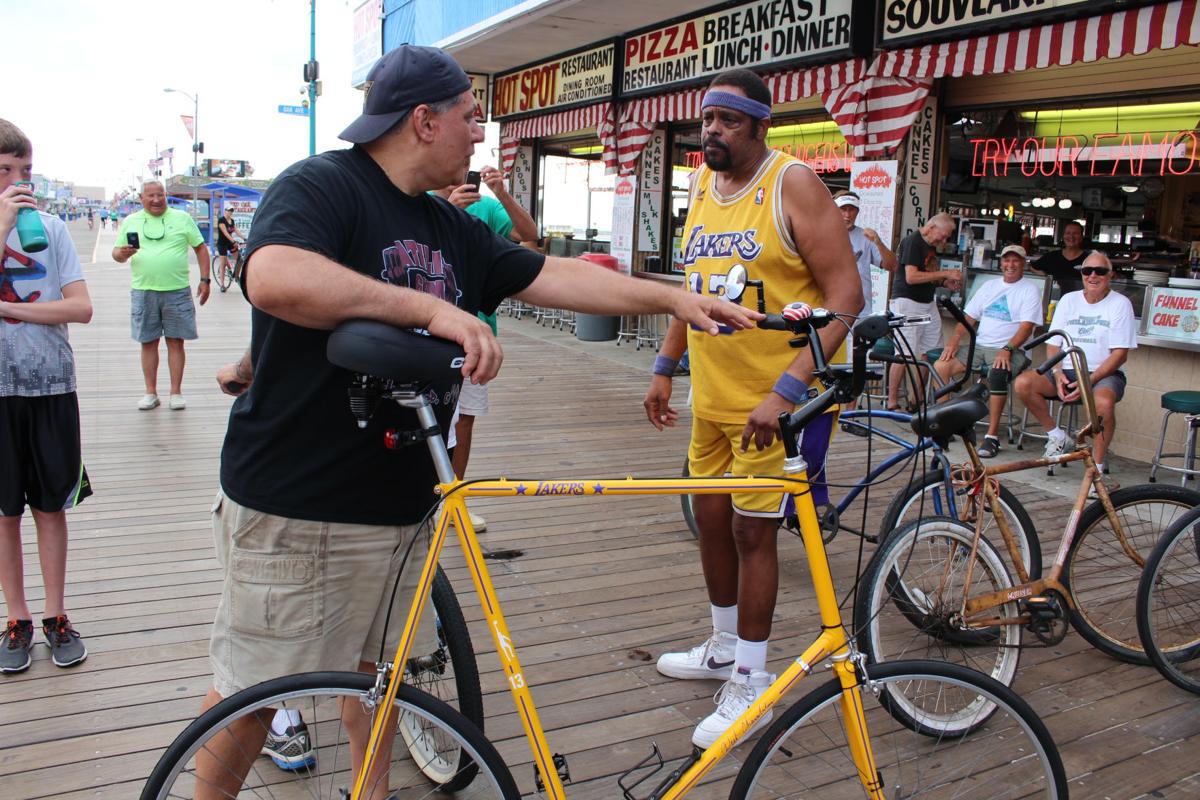 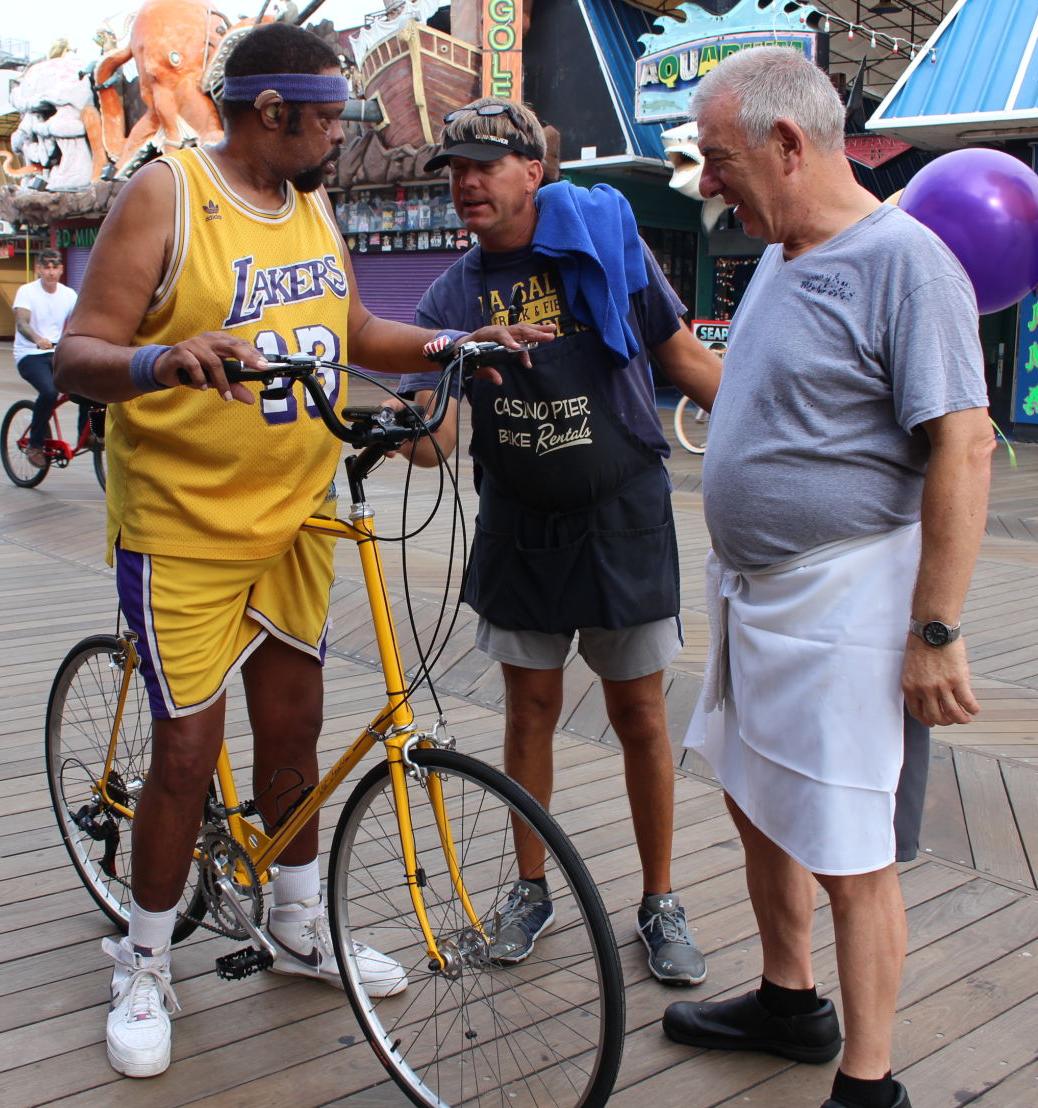 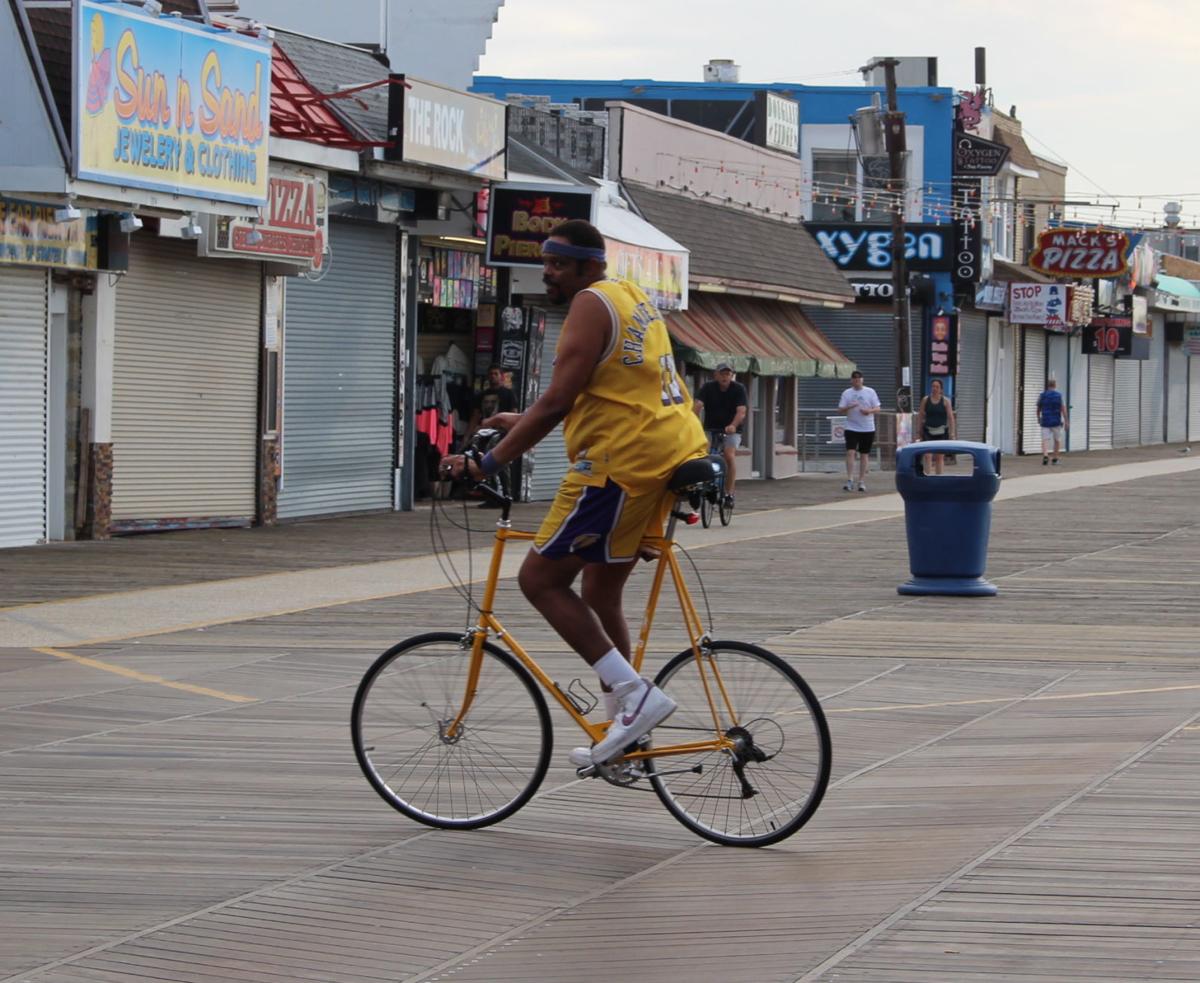 Wilmont Jones rides his restored bike for the first time on the Wildwood Boardwalk June 6.

Wilmont Jones sits on his newly restored bike for the first time on the Wildwood Boardwalk June 6.

Wilmont Jones rides his restored bike for the first time on the Wildwood Boardwalk June 6.

WILDWOOD – Wilmont Jones is known to locals as an “icon in the Wildwoods,” according to his friend, part-time Wildwood resident George Eworth.

“Everyone knows Wilmont,” he said.

Mayor Ernie Troiano called Jones, who retired from the Public Works Department in 2016, a “good man” and a hard worker.

Jones, a 58-year-old lifelong Wildwood resident, is characterized by wearing a Los Angeles Lakers jersey every day and riding around town on his tall bike, his friends said. Jones is 6-feet, 5-inches tall.

Jones sports Wilt Chamberlain’s number daily because he is a second cousin to Chamberlain, according to Jones’ power of attorney, Tony Piro.

Jones followed his late cousin’s basketball career from the Philadelphia 76ers to the Lakers, Piro said.

“I’ve been hanging out with (Jones) for 40 years,” said Piro, owner of Piro’s Pizza in Wildwood. “I met him one day when he walked by my store and I said ‘Hi.’ He starting hanging out in Piro’s every day.”

To show appreciation for Jones, Piro and several of their mutual friends pitched in to fix up Jones’ bike, which was built in 1984 by a custom frame builder in Pennsylvania.

Charlie Small and Vince Trombetta, both of Wildwood, drew up plans for the bike’s makeover. Plans involved cleaning up the original parts and installing a new gear shifter, as well as a paint job in Lakers’ colors – purple and gold – with Chamberlain’s signature stenciled onto the frame. Jones approved the plans.

On June 6, Joe Henry, of Wildwood, took the bike to a Millville paint shop that used powder-coating for the finish.

After the bike was painted, it was taken to Jim Malinowski, owner of Casino Pier Bikes, who restored the original parts, replaced the 34-year-old gear-shifter and reassembled the bike.

“They did a lot more than that,” Small said.

As a surprise, Malinowski also installed lights and a bell free of charge. Malinowski only charged for parts, Piro said.

“(The bike) was older, but we just brought it back to life,” said Malinowski, who said he has known Jones for “years.” “We put a lot of love in it to make it look like that.”

Piro told Jones the bike would be ready on July 9, but Malinowski finished the bike four days earlier, on July 5. So they decided to surprise Jones the next day.

The morning of July 6, Piro, Jones and their friends embarked on their daily Boardwalk bike ride. Jones rode a borrowed bike since his own bike was in the shop, Piro said.

Meanwhile, Malinowski, Small and Eworth brought Jones’ bike from the shop to the boardwalk at Oak Avenue, and stood it up in the middle of the boardwalk with purple and gold balloons attached.

A few minutes later, the cyclists came around the bend at Schellenger Avenue.

“That’s not my bike,” Jones said after seeing the restored bike. “I can’t ride it. Take it back.”

“When he gets shy like that and mad, it means he’s beaming inside,” Piro said.

Jones hopped on the bike, and told Piro he “loved the handlebars.”

Piro, and Jones on his gold-and-purple bike, rode to the end of the boardwalk, then joined the rest of the cyclists at a boardwalk diner for breakfast.

Jones worked for the Public Works Department for 37 years, retiring Dec. 16, 2016. The city commemorated the day with a proclamation of “Wilmont Jones Day.”

“When you put him out to work, you knew you’d get good work out of him,” Troiano said of Jones. “You don’t get those kinds of guys often.”

Jones has had deafness in both ears his entire life, Piro said.

“Tony (Piro) is his guardian angel so to speak,” Troiano said. “He keeps an eye on him.”

Eworth said they originally tried to have a shop in Philadelphia restore the bike, but it was taking too long for that shop to finish the job.

With paint and parts, the bike cost Jones’ friends about $1,500 to restore.

“A little Wildwood love and it came all together,” Eworth said. “This bike was built with love.”