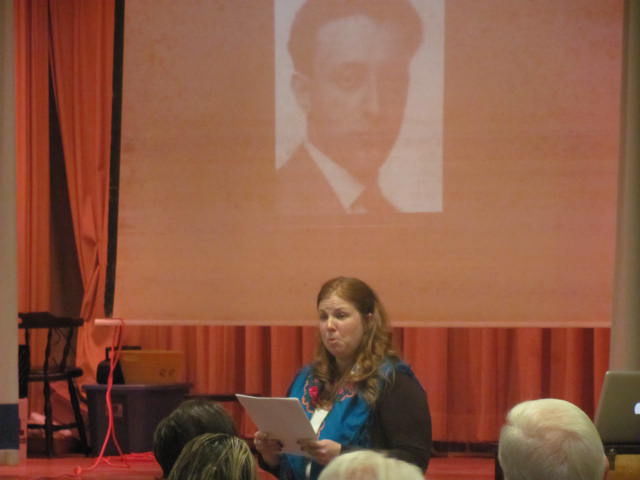 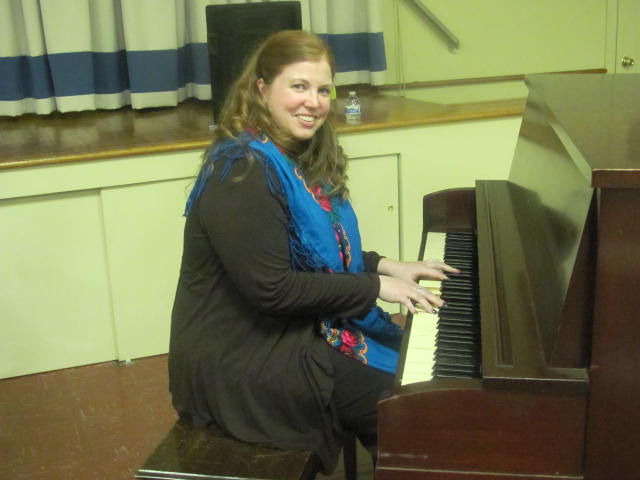 Karen Uslin at the piano.

Karen Uslin at the piano.

WILDWOOD ─ "I think about that each time I visit Terezin and sleep in an apartment there, where my feet walk on streets where people died. I thought that when I played piano in a dusty room in the Magdeburg Barracks that held music performances 63 years ago to a group of starving, dying prisoners."

Dr. Karen Uslin, professor of Musicology at Rowan University, spoke those words as she took the audience on a journey into the past April 23.

Held at Beth Judah Temple, an "evening of music and memory" unfolded before synagogue congregants, Wildwood residents, and guests.

Six candles, waiting for the flame to caress wick, upon a simple table, bore silent witness to the 11 million exterminated by the Nazi regime before and during World War II. According to the program, 6 million of those were Jews - fathers, mothers, children, the everyday and the elite sent to places such as Auschwitz and other concentration camps across Europe.

A 36-year-old musician named Rafi lit a candle of his own in a dark, cold basement in a camp called Terezin (in present Czech Republic). In the dark days of 1941, Rafi Schächter discovered a "legless piano in the barrack's basement" and began holding sing-alongs, inviting fellow prisoners to sing folk songs of their homeland.

Until his deportation and death in 1945, Rafi organized, taught, and conducted a choir who went on to sing one of classical music's most treasured pieces: Verdi's "Requiem."

According to Uslin, "Terezin would hold thousands of musical performances, theatrical performances, and academic lectures over its four-year existence. Music would thrive among the most desolate horrors of humanity."

Though imprisoned, the Nazis could not take away "their (Jewish) imaginations and creativity," she added.

Musicians, writers, artists, and scholars continued to pass down traditions and to create. Orchestras performed, at times, even for the entertainment of their captors.

Uslin, 33, shared how her journey with Schächter and the "Requiem" began: "63 years and three months after Rafi Schächter was deported, a 20-year-old college junior sat in her dorm room making a list of possible subjects for her senior thesis project.

She (Uslin) sat watching the 2003 Academy Awards and saw Adrien Brody win the Oscar for the movie "The Pianist."

Intrigued, Uslin wanted to know how Jewish musicians could "make music and art" during the Holocaust. "A senior thesis topic was born, and a life was irrevocably changed," said Uslin.

In 2006, Uslin met with Holocaust survivors Edgar and Hanna Krasa through a friend whose family is Jewish. Edgar knew Schächter personally and had also been a member of his choir.

Terezin, in northeast Czechoslovakia, was a garrison town designed to house 7,000. After Hitler had conquered Czechoslovakia, the town became a "holdover camp," a "place where Jews...and prominent members of the Third Reich would be sent until they were transported further to death camps in Poland, mainly Auschwitz." Terezin also served as a "propaganda" camp - guests, such as the International Red Cross (IRC), were given tours by officials.

In 1944, the IRC reported to the Allies that conditions "were adequate for the Jews in Terezin."

Deception masked the horrors of camp life. Less than 1,000 of 33,000 prisoners survived.

According to Uslin, a requiem is a Roman Catholic Mass for the dead; it is the equivalent of the Jewish Kaddish.

Giuseppe Verdi, an Italian composer of the 19th century, shifted the emphasis of his requiem to salvation from wrath. Schächter chose Verdi's "Requiem" as a symbol of defiance against the Nazis, despite criticism from fellow prisoners. After seven weeks of practice, the first performance took place in September 1943. One scholar wrote of the prison performance, "It is like a soft prayer on wings of music."

Schächter was ordered to perform the score for the IRC in 1944. Deportation cut the choir's membership, but Schächter continued to lead the choir until his deportation.

According to Uslin, Schächter endured Auschwitz until his death during a march sometime in March 1945. Somewhere, along with the byways of Poland, Schächter sleeps.

Uslin played selections from Verdi's Requiem, from the movement "Libera Me (Free Me)." A few sobs echoed in the room.

Uslin describes her journey with Schächter and surviving choir members as "incredible."

From her days in Catholic school and university, Uslin earned her doctorate in Musicology and resides in Court House.