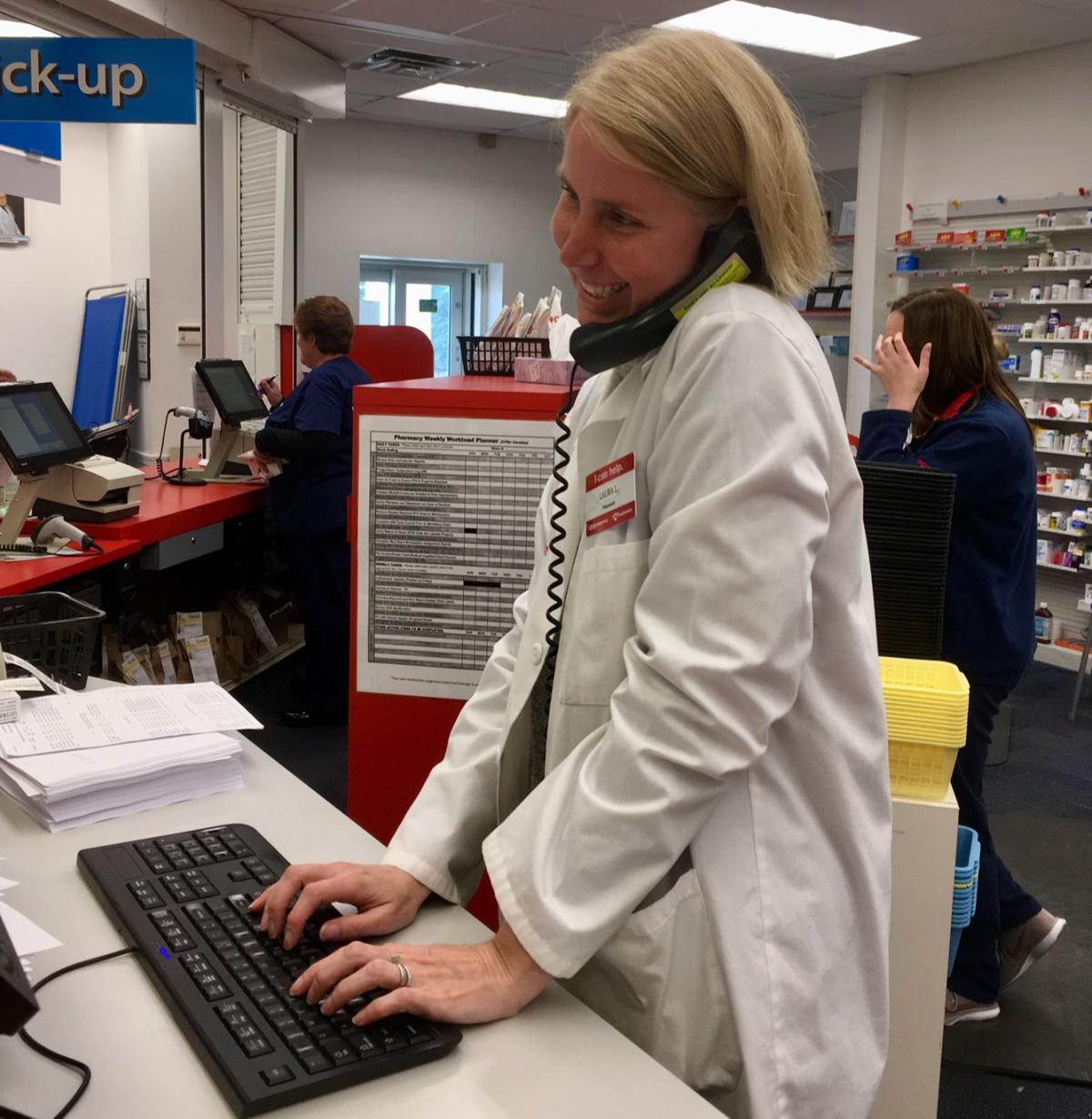 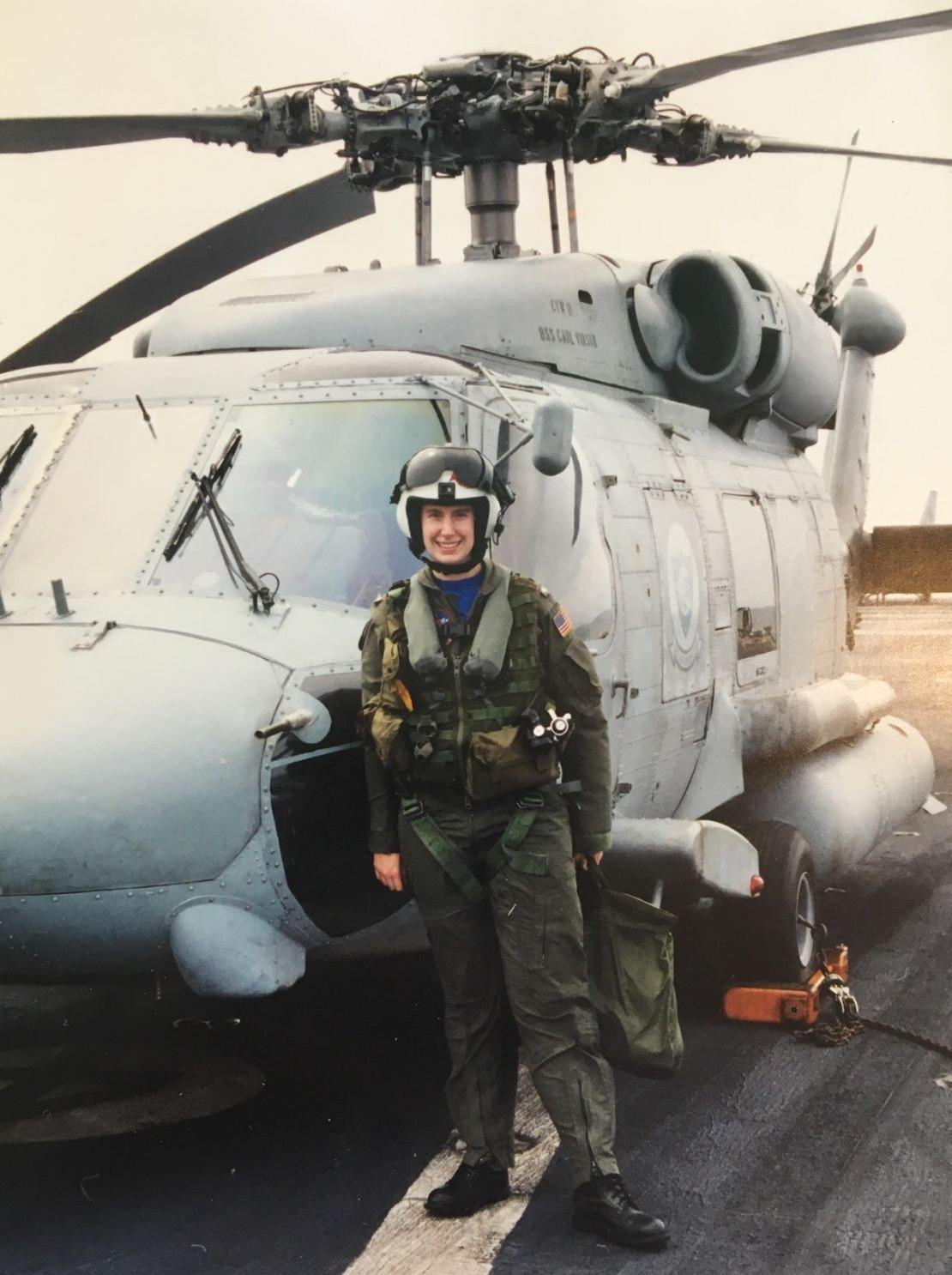 WILDWOOD – Laura Long darted between the pick-up window, where a line of patrons waited, the row of shelves lined with prescriptions, the drive-through window, the computer, and the ringing telephone at the Wildwood CVS Pharmacy May 3.

The 43-year-old pharmacist said her job was not unlike the decade she spent as a Navy flight instructor and pilot during 9/11 and Operation Iraqi Freedom.

In both careers, Long said she had to multitask, prioritize and work meticulously under pressure.

“Whether it’s pressure from a mission you’re on in the aircraft, or whether it’s from unhappy customers because their insurance isn’t paying for their medication,” she said. “If you make a mistake, you can be putting somebody’s life in danger.”

For the past four years, Long has worked at the pharmacy in Wildwood, doing what she said she joined the Navy and ultimately went to pharmacy school to do: help people.

In mid-June, Long’s time in Cape May County will end. Her husband Chad Long, a Coast Guard commander, stationed at Atlantic City, is enrolling at the Naval War College in Rhode Island, and Laura and their children are going with him.

“It’s going to be a new family adventure,” she said.

New Jersey is one of many states where Long has resided. Others included Indiana, Maryland, Texas, Florida, California, and North Carolina, but her journey began in Cincinnati, Ohio.

A straight-A student, ballet dancer, and violinist, Long said everyone assumed she would study fine arts in a liberal arts school. Then, in seventh grade, she had an epiphany.

One morning before school, while her mother was cooking breakfast, Long saw a "Today Show" segment about the U.S. Naval Academy. Reporter Willard Scott met with uniformed officers, who explained how their education was paid for by the government and how they enjoyed serving their country.

“I was just mesmerized by it,” Long recalled. “If I could get into this place, it would be so exciting and so different than anything that anybody else I knew was going to do.”

When she told her mother, her mother didn’t take her seriously, she said.

“My parents always wanted me to do what I wanted to do,” Long said. “They just thought I was going to change my mind.”

In junior year of high school, she enrolled in a summer program at the Naval Academy in Annapolis, Md. Just like cadets, students in the program woke at the crack of dawn and ran every morning.

“The more people who told me they didn’t think I could do it, the more determined I was,” she said.

She applied for studies at the Naval Academy, a four-year college that gives students both Navy (and Marine Corps) a commission and a bachelor’s degree in an area of study. The government pays for schooling, and in return, students must serve in the military.

The extremely selective school required applicants to pass a physical exam, Long said. She estimated women made up 8-9 percent of the academy in the 1990s.

She was accepted into the Naval Academy, pursuing a bachelor’s degree in oceanography and military career in aviation.

“I liked the idea of a helicopter because I thought it would be fun to be lower, to be able to see things around me and to do the missions of search and rescue,” she said. “[It was] more of a mission of helping people. I wasn’t so interested in attacking things or bombing people.”

Long was assigned to be the line division officer of helicopter squadron HS-6. She piloted the H60 helicopter, which she called the Navy’s version of the Blackhawk.

The squadron was airborne when planes crashed into the World Trade Center Sept. 11, 2001.

HS-6 was in the middle of training: the squadron was headed to a ship for a practice landing when Long was radioed that they could not proceed with the landing and they had to go back.

No reason was given, and Long said she was frustrated because she thought they weren’t prepared for training.

HS6 returned to the carrier, the USS Carl Vinson, where all aircraft were being recalled.

HS-6 was always the last to land because their job was to make sure everyone else landed safely and no rescue missions were necessary.

After landing and removing their gear in the ready room, Long and the rest of the squadron saw the tower collapse on television.

“We were all just staring at it,” she said. “By the end of the day they were telling us it was a terrorist attack, and we were likely going to be involved in this mission if there was going to be a mission.”

Weeks later, HS-6 was the first to launch airstrikes in Operation Iraqi Freedom after waiting in the Arabian Sea.

When the squadron’s six-month deployment was extended to eight months, Long began to worry she would miss her wedding to Chad, whom she met in flight school. But, they made it back in time.

The squadron deployed again on another carrier, taking part in Operation Iraqi Freedom in the Persian Gulf.

As part of that sea tour, Long also had a “shore tour” in which she served as a flight instructor at Corpus Christi, Texas.

Long trained flight students in a T-24, a fixed-wing aircraft with two sets of controls: one for the trainee, and one for the instructor who could override the trainee.

“I just loved having a brand-new student who was so excited to go flying,” she said.

Long finished her required military service after eight years, but Chad was still in the Coast Guard. If she continued with the Navy, she and Chad would have been sent to different states, she said.

So Long ended her service, moved to North Carolina with Chad, and became a stay-at-home mom to their two daughters. But after four years, she wanted to go back to work.

She decided to find a career that would allow her to move wherever the Coast Guard sent Chad, looking into teaching, nursing, and healthcare in general before discovering pharmaceuticals.

The GI Bill entitled her to four free years of college and living expenses for her children so Long enrolled in the University of North Carolina’s Eshelman School of Pharmacy.

She attended a satellite campus close to their home. Her children were 2 and 4 years old, “which is a crazy time to go back to school full time,” she said.

Most of her classmates were 18 and 19 years old, and she hadn’t been in a classroom for a decade.

“The instructor was talking about logging into Blackboard, and I was looking around for a blackboard,” she said.

But her biggest challenge was balancing school and motherhood.

“My time to study was after everything else was done, and I got my kids in bed,” she said.

She landed an internship with CVS and was offered a job. In 2014, the Longs moved to Linwood and Laura began working at the pharmacy’s Wildwood location.

“She does all the right things you’re supposed to do all the time,” Shim said. “She’s really an excellent pharmacist, and good partner…she’s had a great, sarcastic sense of humor.”

Shim is “dreading the day” Long will leave New Jersey.

Long will transfer to a CVS in Rhode Island, but she said she would miss her Wildwood customers and coworkers.

“I have a bunch of customers here that I’ve known now for four years and a lot of them I know on a personal level,” she said.