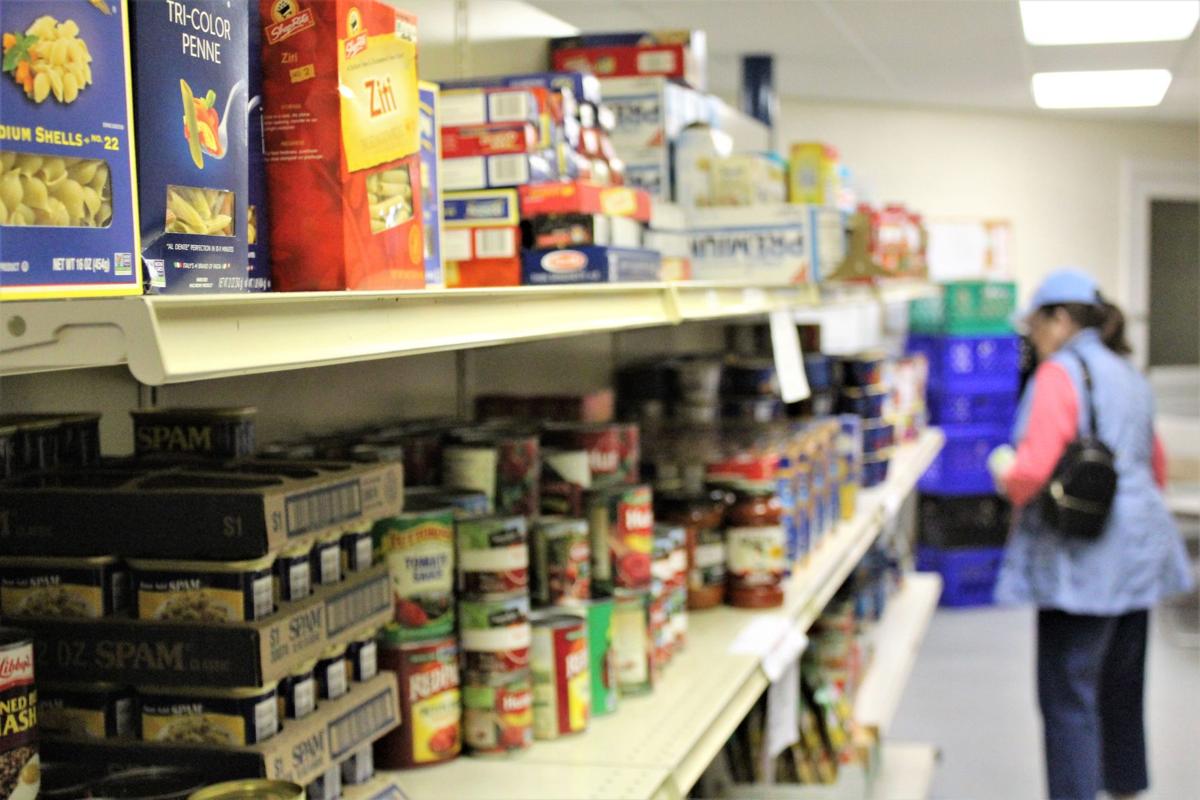 Boxes and cans of food await distribution at the Ocean City Food Cupboard, which for many years has been operated by the Ecumenical Council out of the basement of St. Peter’s United Methodist Church. Like the numerous other food programs throughout Cape May County, the organization relies on volunteers and donations to help residents and families through tough times. 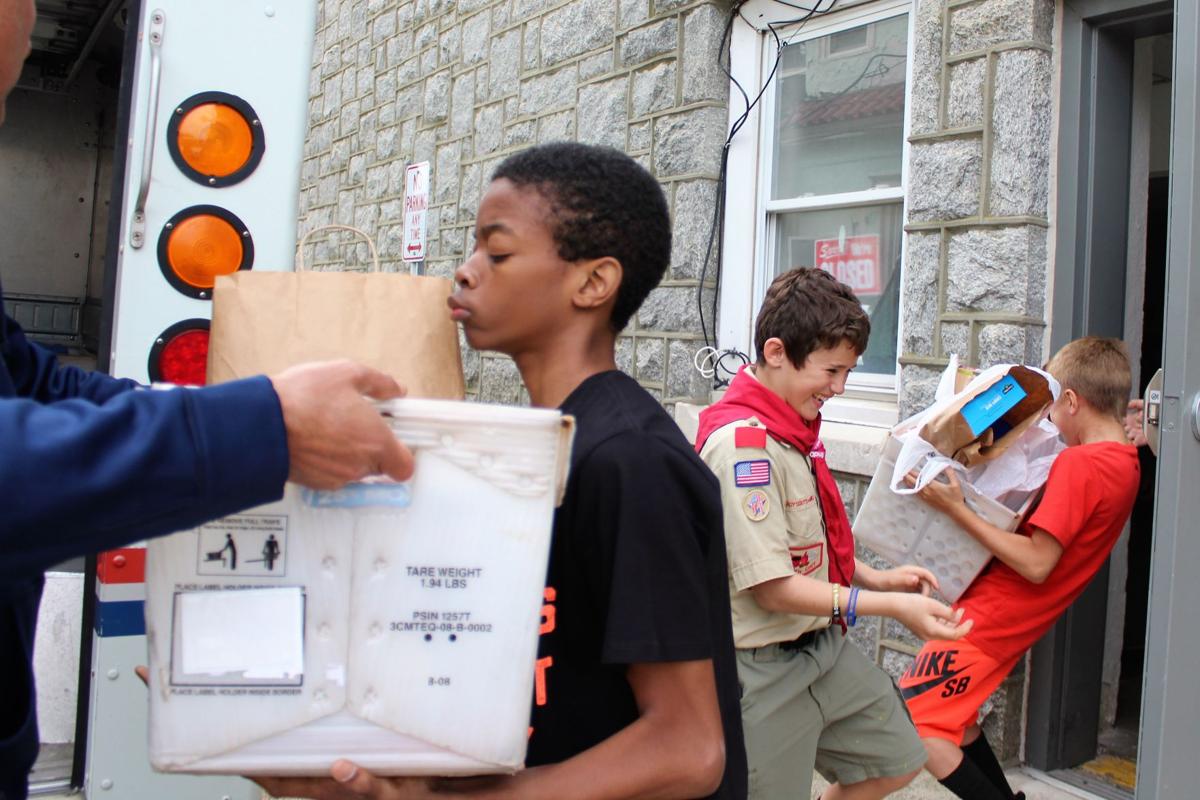 Young volunteers unload packages of food delivered to the Ocean City Food Cupboard in the spring food drive undertaken by U.S. Postal Service letter carriers twice a year. People often think of food drives around the holidays, according to staff at the food cupboard, but the need continues throughout the year.

Boxes and cans of food await distribution at the Ocean City Food Cupboard, which for many years has been operated by the Ecumenical Council out of the basement of St. Peter’s United Methodist Church. Like the numerous other food programs throughout Cape May County, the organization relies on volunteers and donations to help residents and families through tough times.

Young volunteers unload packages of food delivered to the Ocean City Food Cupboard in the spring food drive undertaken by U.S. Postal Service letter carriers twice a year. People often think of food drives around the holidays, according to staff at the food cupboard, but the need continues throughout the year.

OCEAN CITY - Despite strong reports from Wall Street and news of low unemployment, families are struggling to get by throughout Cape May County, as well as throughout the country.

For some, the choice between making the rent and buying groceries is rarely that far away. In church basements and storefronts throughout the county are organizations set to help.

Typically, it’s not a long-term solution, most limit the number of visits by individuals or families in a given month, but for some, the donated groceries at the food cupboards have made the difference between full stomachs or their families going hungry.

In Ocean City, usually seen as an affluent summer resort, more than 1,000 households turn to the food cupboard for some level of support. Usually, it’s toward the end of the month, as assistance through the federal food program starts to run low, according to coordinator Dottie Cianci.

The Ocean City Food Cupboard is run by the Ocean City Ecumenical Council. Members of various churches volunteer to staff the cupboard, which is open 1 to 3 p.m. Monday to Friday. There is a door on the alley behind St. Peter’s United Methodist Church at 501 East Eighth St.

The need is strongest in the winter. In the summer, jobs are easier to come by in kitchens, on the boardwalk and elsewhere around town, she said. But still, some need a hand to keep food on the table.

In December and May each year, the cupboard holds a food drive. Residents leave non-perishable food to be collected by letter carriers, who drop it off at the cupboard.

The December event usually does a little better, Cianci said, as everyone is in a giving mood that time of year. A lot comes in each spring as well. This year, the cupboard received more than 5,700 pounds of food.

As it got to be afternoon, the white postal trucks began to get backed up. Scouts, church members, and other volunteers formed a fireman’s line, passing bag after bag of groceries from the trucks down the stairs and into the basement of St. Peter’s United Methodist Church, the home of the Ocean City Food Cupboard.

The food must then be sorted and readied for distribution. According to Cianci, the cupboard tries to provide food appropriate for the living arrangements of those who rely on it.

For instance, many in Ocean City living in rooming houses only have a microwave, so they rely on prepared food. The first Wednesday of each month, the cupboard delivers food to those who are homebound.

Many local organizations and stores help keep the shelves stocked, she said. The Board of Realtors holds a food drive every year. Wawa and other businesses often provide food.

“Thank God we have the freezers,” she said.

The cupboard receives regular donations from individuals and organizations. Some give food while others give money, which can result in more food when it is used to buy food directly from the distributor.

The local cupboard also has a grant with the South Jersey Food Bank.

“We can go there or we can buy it. And people donate food,” Cianci said.

Just as the local organizations depend on the Community Food Bank of New Jersey, the Atlantic County-based organization depends on the local groups to get the food bank to people who need it.

The food bank has 37 partner agencies in Cape May County, and more in communities in Cumberland and Atlantic counties, according to Kimberly Arroyo, director of agency relations and programs for the food bank.

“We couldn’t do the work that we do without the help of our local churches and community organizations,” she said.

While shore towns see demand slow down as the local economy heats up for the summer, Arroyo said in some ways her job gets busier. Children who get free or reduced-price lunches and breakfasts in school systems may be glad to be out of classes, but in many cases, summertime means less to eat each day.

That effort is state-funded, she said, so the camps and programs do not face any additional costs. At the end of each summer, Arroyo said, the organization sees demand creeping back up as the shutters come down on boardwalk businesses and the tourists head home.

“It’s a year-round issue, hunger in our communities,” she said. In a year, the food bank distributed millions of meals in South Jersey, around 2.5 million pounds of food to Cape May County, she said. Some of that comes from corporate sponsors who provide food regularly. Some come from donations to the Food Bank’s Egg Harbor Township warehouse and offices.

The organization also gets food from the state food purchasing system and through the U.S. Department of Agriculture, but that’s 16% of the total for the year.

“The rest is done through our fundraising efforts,” she said. Donations of food may be more emotionally satisfying for the donors, but she said cash can have a bigger impact. “For every dollar given, we are able to multiply that by five in buying power for us.”

Like the food cupboards it supplies, the food bank depends on volunteers, Arroyo said.

“Ninety percent of the food pantries are run by volunteers. This could not be done without the efforts of our dedicated volunteers,” Arroyo said.

Responding to Other Needs

The food bank distributes food at its Egg Harbor Township site. The organization has a food cupboard on site, but many of those who turn to the food bank need more than something to eat.

Often, families are in crisis, searching for housing, facing crippling medical expenses or with a member struggling with addiction.

“One of the challenges we see is it’s not just one thing. They need other services,” Arroyo said.

Before offering food, staff speaks to the clients, getting them in the system, at which point they offer a resource manual with information on how to get help with job training and to apply for other programs.

Resources are limited, she said. “Our main focus is to feed people,” she said.

It used to be fresh vegetables in summer were just about the cheapest option to feed a family, especially in farm-rich South Jersey. Now, the cheapest way to fill up a growing family is often with processed food, with former staples like fresh broccoli in the summer sometimes seen as a luxury.

“We are definitely looking at hunger as a health issue. Unfortunately, unhealthy food is cheapest,” Arroyo said. Her organization offers courses in nutritional education to help families eat healthier with limited resources.

“We try to make the healthiest choice the easiest choice,” she said. “We put great emphasis and efforts into getting produce. Not only getting the produce but also showing families how to use it.”

At the food cupboards like the one in Ocean City, volunteers rely on non-perishable food like canned goods and boxes of ready-to-make dinners, which are easier to handle and can remain on the shelf for months or more. Fresh produce is only fresh for a little while. Before long, it’s trash.

Like Cianci, Arroyo cited local businesses which give generously to the food bank, in cash, and in food. She said the need fluctuates throughout the year and with the changing job market, but does not seem to ever go away entirely.

“What we’re finding is that while we were designed for temporary assistance, more and more families are relying on food pantries,” Arroyo said. It may be just enough to carry a family through until the next paycheck or make up the difference when the rent is due. Year-round, throughout the region, these volunteer organizations help keep food on a lot of kitchen tables.

Food Banks in Cape May County

According to a listing posted by the Community Food Bank, there are numerous food resources throughout Cape May County. See www.cfbnj.org/findfood for a complete listing and contact the individual organizations for hours and details about requirements.

"Cape May County has one of the highest food insecurity rates in New Jersey." - Kimberly Arroyo, director of agency relations and programs for the Community Food Bank of New Jersey.