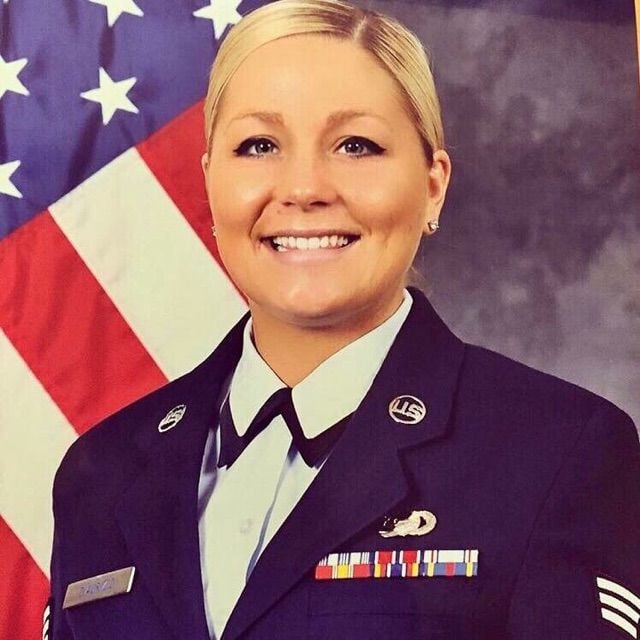 Wildwood High School 2010 graduate Katelynn D'Aurizio is fighting to aid homeless women veterans by competing in the Ms. Veteran America competition. She is active duty in the U.S. Air Force.

The Ms. Veteran America contest showcases the "woman beyond the uniform" in its fight against homeless women veterans and their children.

Wildwood High School 2010 graduate Katelynn D'Aurizio is fighting to aid homeless women veterans by competing in the Ms. Veteran America competition. She is active duty in the U.S. Air Force.

The Ms. Veteran America contest showcases the "woman beyond the uniform" in its fight against homeless women veterans and their children.

WILDWOOD – Women veterans currently are the fastest growing homeless population. One woman is doing her part to help them. Katelynn D'Aurizio, who is currently active duty in the Air Force, is competing for the Ms. Veteran America title, raising funds for and awareness of homeless female veterans.

If she wins, she'll be an active advocate for Final Salute Inc. and their efforts to assist who they term "the fastest-growing homeless population."

"Seeing my sisters struggle causes me great pain," said Senior Airman D'Aurizio. "By competing in this contest, I can help raise money for these women who have sacrificed their lives and families for our country."

D'Aurizio, who graduated from Wildwood High School in 2010, joined the Air Force four-and-one-half years ago for a "better life. I wanted to continue my education, as well," she said. "I really enjoy it and have decided to make it my career."

The 25-year-old is stationed at Scott Air Force Base in south central Illinois, where she works in intel operations.

She seems to be making the most of her military experience in reaching her goals as she will complete an Associate's degree in intelligence studies and technology this August from the Community College of the Air Force.

She also is working on a Bachelor's degree in Business Administration from McKendree University, Lebanon, Ill., which is projected to be completed in three years.

At the same time, last year she spent more than 160 hours volunteering on and off base, earning her the Volunteer of the Year Award from her squadron.

Volunteering is also one of the criteria for judging of the Ms. Veteran America award, along with military history, advocacy, talent and an interview.

Judges also will assess the contestant's grace, poise, confidence, and personality, according to its website.

"You have two minutes to show off your talent," D'Aurizio noted. "My talent is cutting up shirts into cool designs."

The competition highlights "more than the strength, courage, and sacrifice of our nation's military women," according to the Ms. Veteran America website. "The purpose of the event is to showcase the woman beyond the uniform. It reminds us that they are mothers, daughters, sisters, and wives. It's also a role model, teaching and empowering young women and girls to support, inspire and lift up one another."

More than $310,000 has been raised by the competition, helping more than 2,000 female veterans and their children by providing more than 10,000 transitional housing days, according to the organization. Proceeds that contestants raise benefit Final Salute Inc.

For D'Aurizio, who married her high school sweetheart a little more than four years ago, winning the competition would enable her to be an influence for her cause.

Ms. Veteran America 2017 will spend more than 100 hours volunteering, and attend speaking engagements and special events as the official spokeswoman of the competition and Final Salute Inc. Part of the prize also includes $15,000 to be used for education, to repay a student loan, start a business, down payment toward a house or home repairs, or a new car.

Regional competition will be held this May, with finals to be held in October.

D'Aurizio intends to pay the $3,000 registration fee herself and hopes anyone wishing to help fight against homeless women veterans will join her and contribute to Final Salute Inc. at https://www.crowdrise.com/mva2017katelynnd.