Coronavirus: Local Information and Coverage
1 of 7 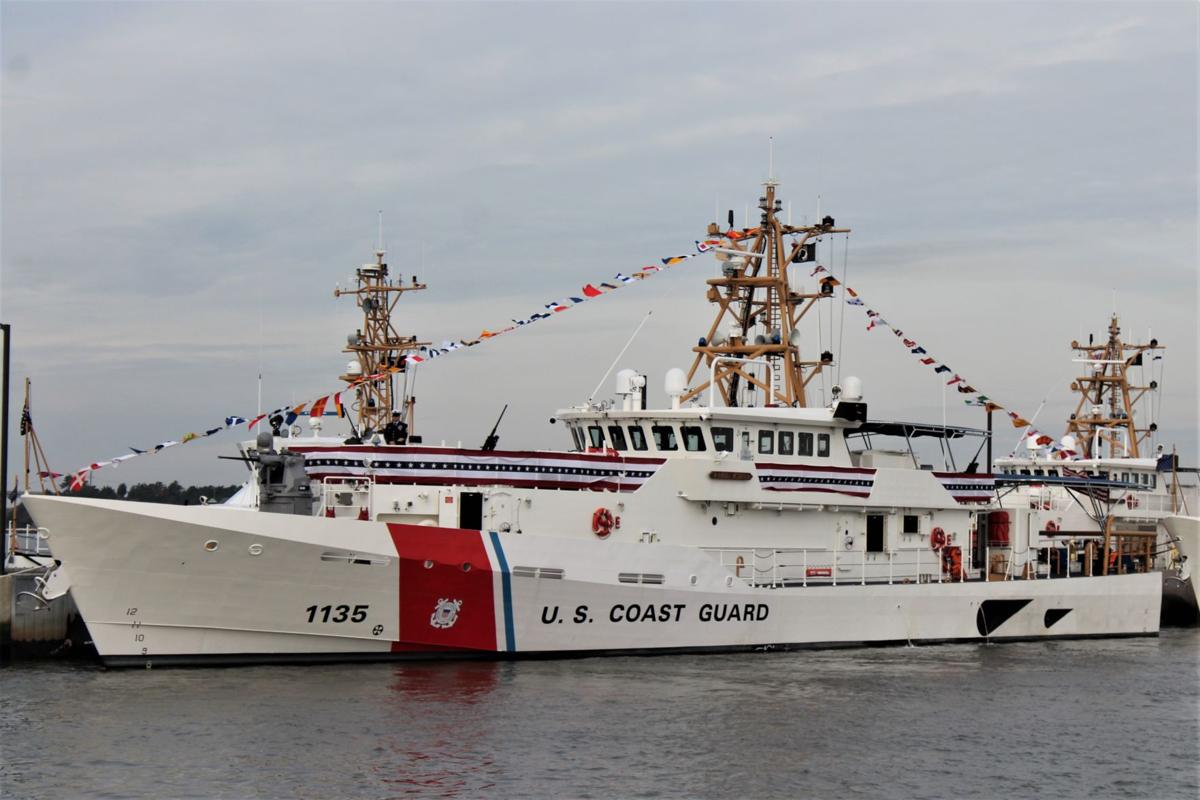 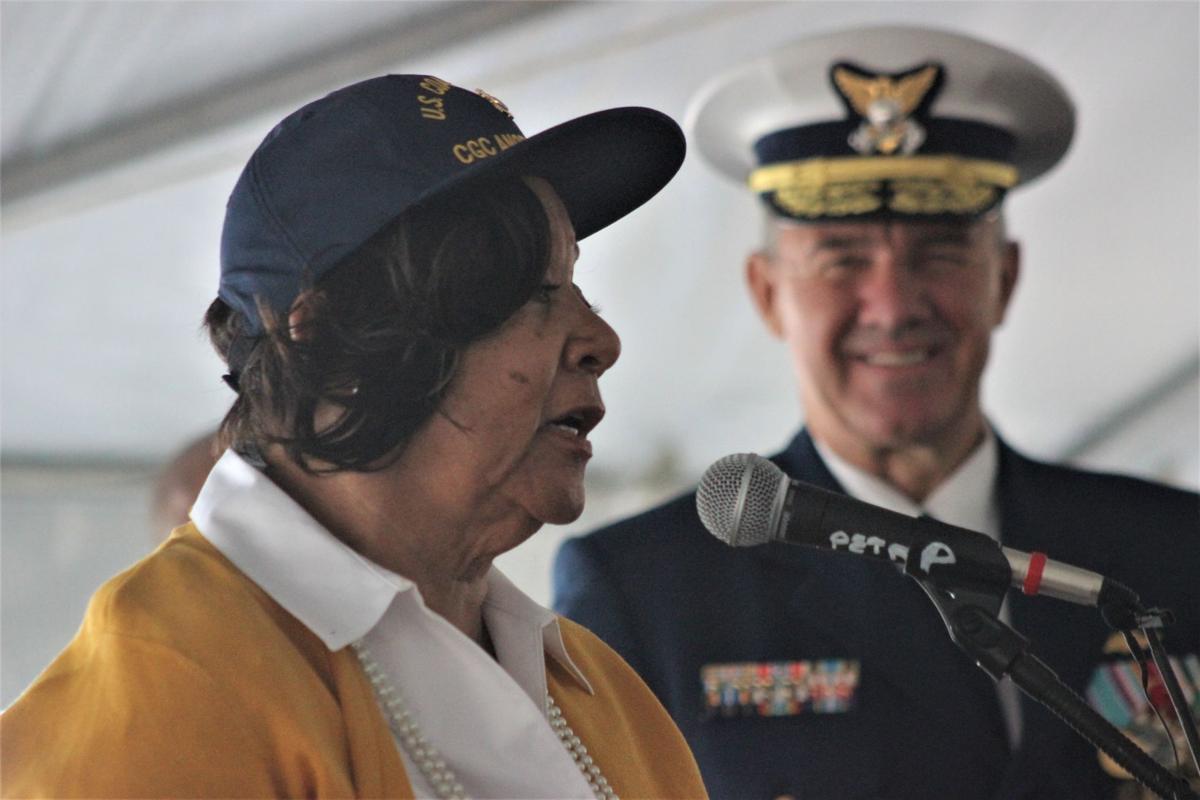 Angela McShan's sister, Marilyn Williams, stands at the podium next to Admiral Karl Schultz during the ship's commissioning ceremony Oct. 26. 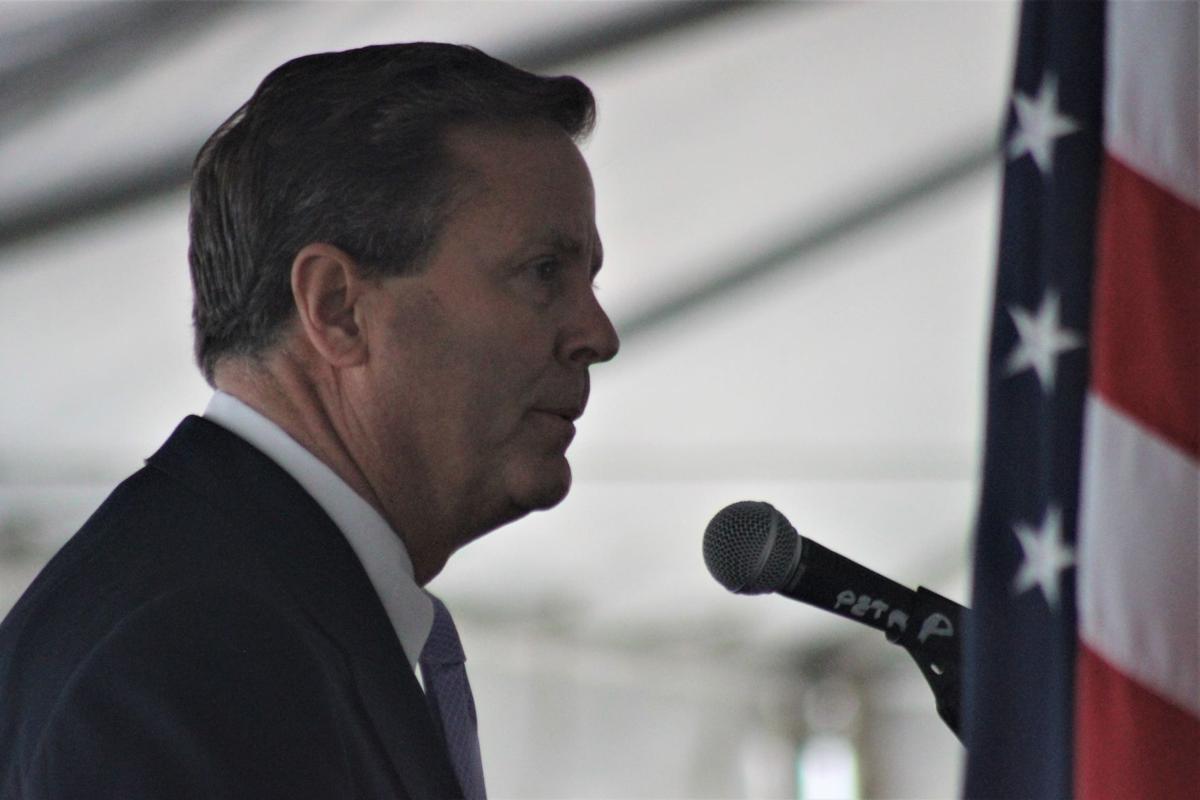 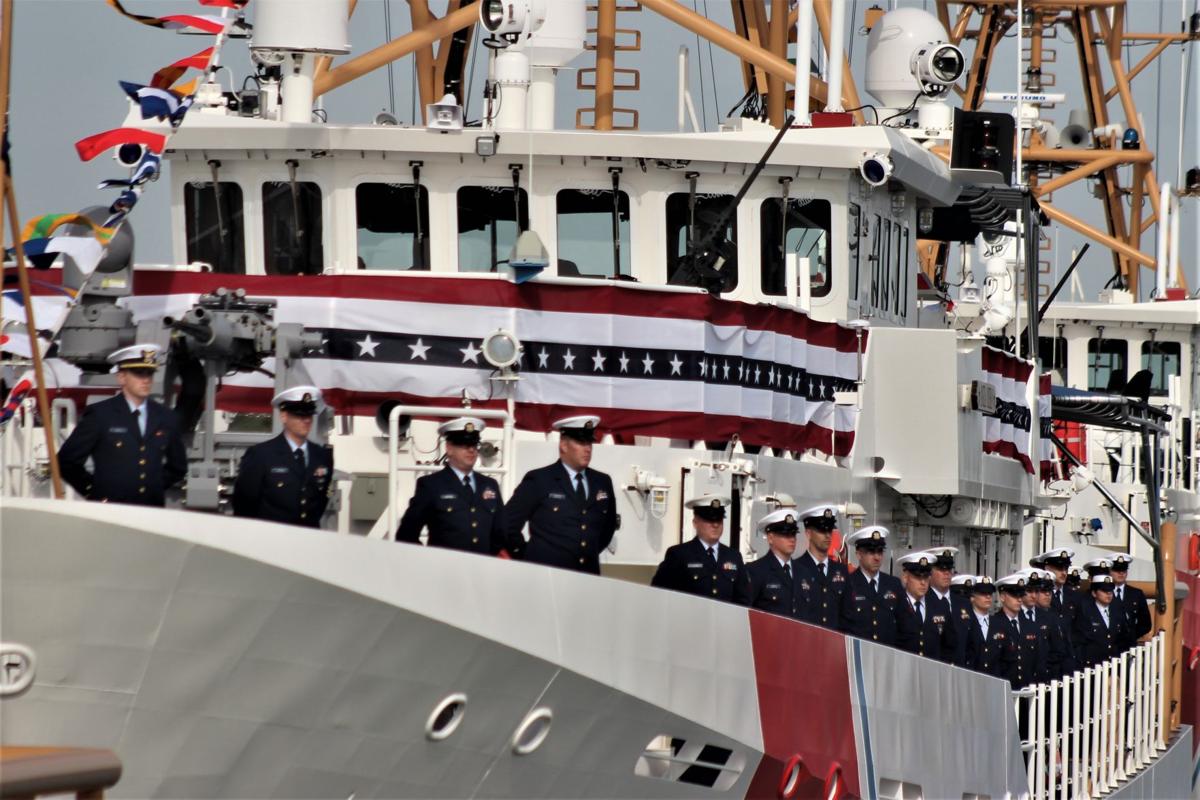 Members of the U.S. Coast Guard stand aboard the USCGC Angela McShan. 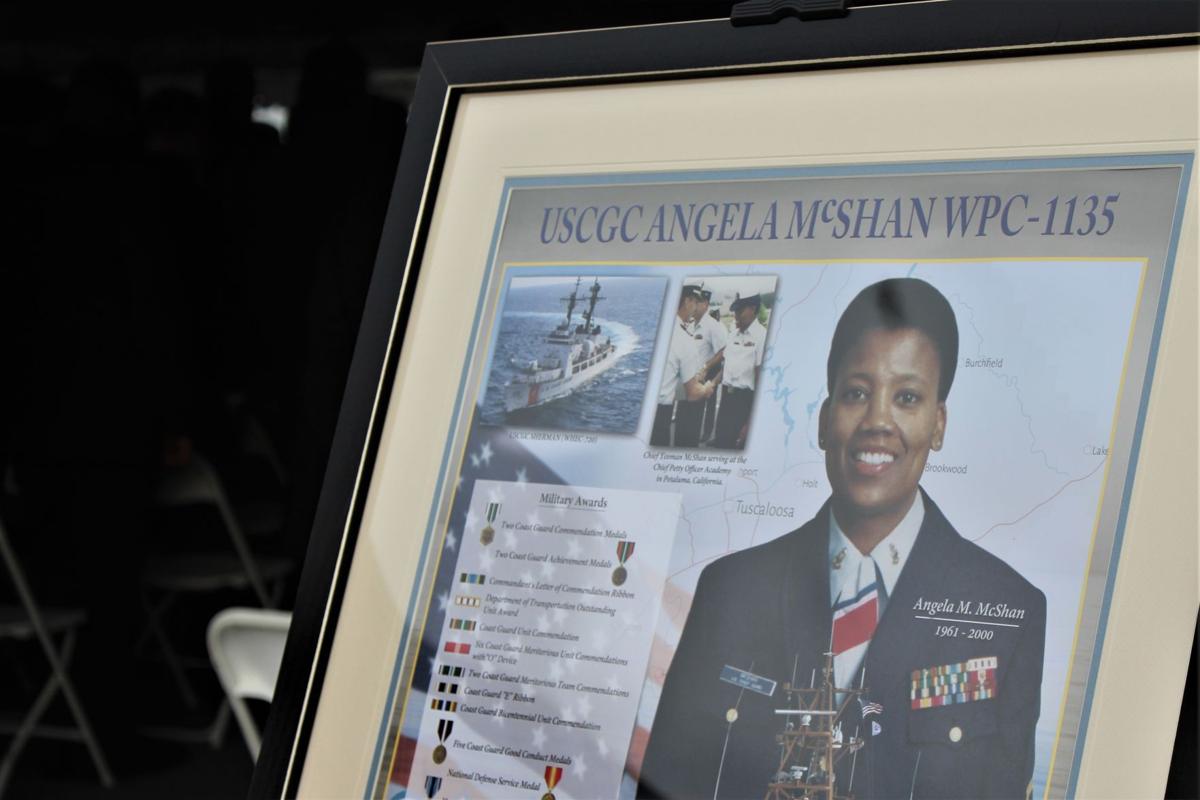 The U.S. Coast Guard's new ship was named in honor of Master Chief Angela M. McShan, who was the first African-American woman to be promoted to master chief petty officer. McShan died in 2000 after an illness. 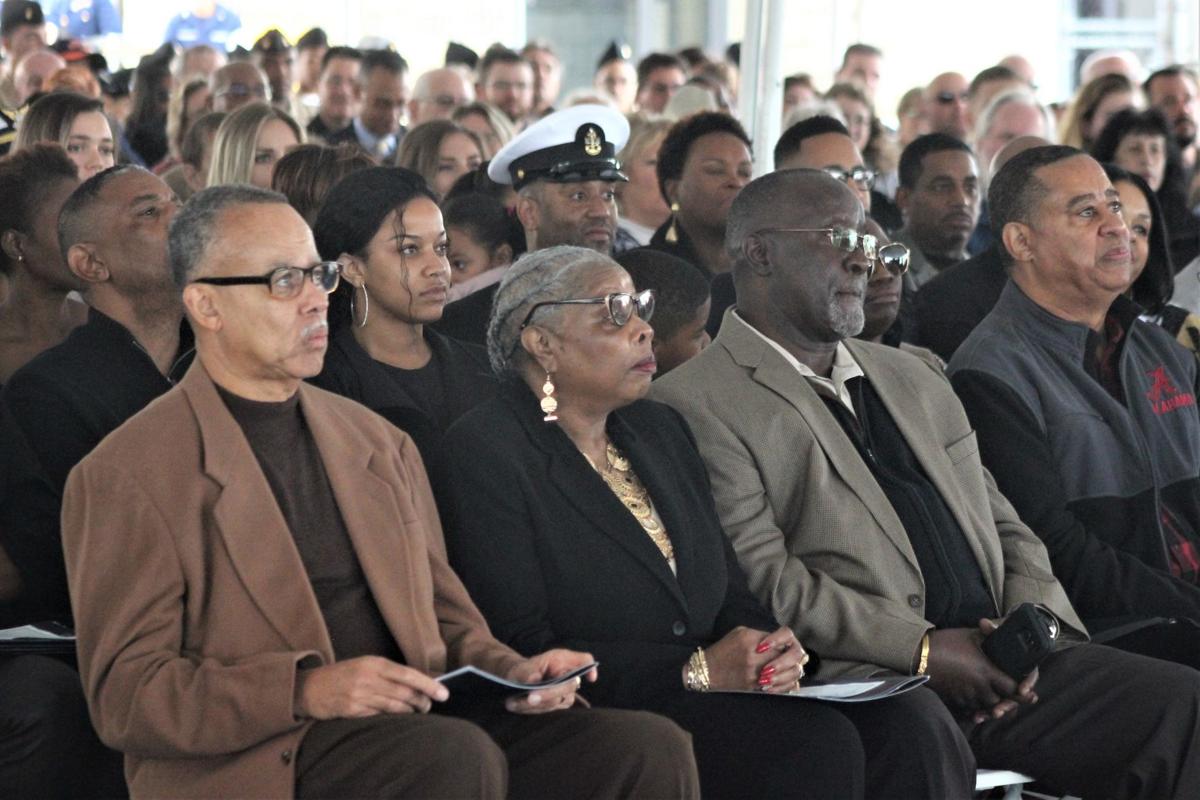 Members of the McShan family attended the commissioning ceremony for the USCGC Angela McShan, named after their family member and former Master Chief Angela M. McShan. 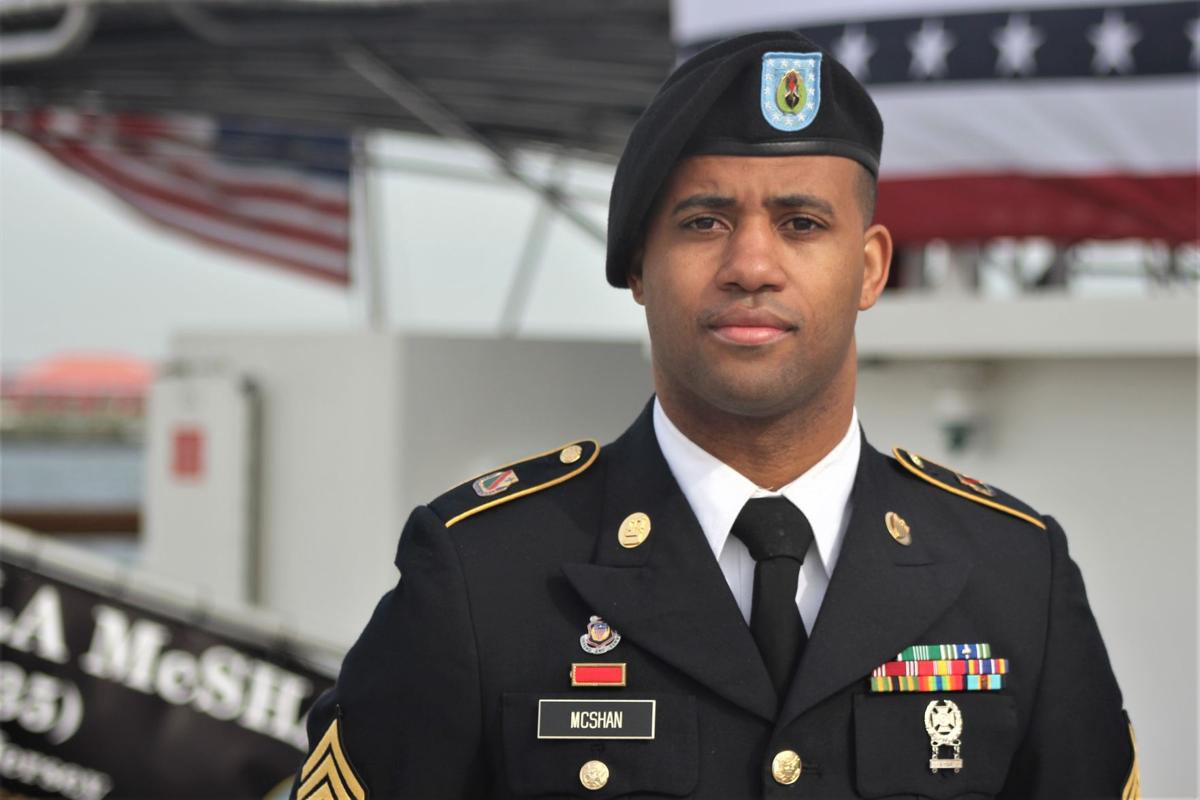 Army Staff Sgt. Jared McShan, nephew of Master Chief Angela McShan, is the youngest member of the McShan family to be on active duty in the United States Military.

CAPE MAY – In a morning of tradition and firsts, and with a heartfelt order to board and bring the cutter to life, the Coast Guard commissioned the USCGC Angela McShan in Cape May Oct. 26.

The cutter’s homeport will be Cape May. It is named for Master Chief Angela M. McShan, the first black woman promoted to master chief petty officer in the Coast Guard.

Several of McShan’s family members attended the event, held under overcast skies dockside, along with many who served with her. McShan’s sister, Marilyn Williams, gave the order for the cutter’s first crew to board the new vessel. They stood at the port rail as she formally commissioned the cutter into service.

The latest in the Coast Guard’s Sentinel-class 154-foot fast response cutters, which are larger and faster than the previous 110 cutters they replace, the Angela McShan will patrol and respond as far south as Bermuda.

The new cutters are named for enlisted members of the Coast Guard who have been deemed heroes. McShan died in 2000 after an illness. Those who knew her described her kindness and her motivational personality, stating that she would be immensely proud of having a cutter named in her honor.

Rev. Vince Patton, a retired Coast Guard member who spoke at McShan’s memorial service, gave the invocation and benediction, pointing out that the sun began to shine as the crew boarded the cutter.

“If Angela were here today, she would surely be so humbled to be given such a great honor,” Williams said.

She said she accepted the honor in McShan’s name, and in the name of all of the Coast Guard members “who have stepped forward to place the needs of others and our great country first.

“May God’s blessings continue to be with Lt. Field and this crew as they accept charge of this new vessel, and embark on their important missions across the seas and beyond. I know my sister will be looking down with pride each time the cutter Angela McShan goes to sea,” she continued.

McShan’s sister said theirs is a military family. The youngest member of the family on active duty, McShan’s nephew, Army Staff Sgt. Jared McShan, boarded the cutter to formally raise the flag.

Admiral Karl L. Schultz, the commandant of the Coast Guard, presided over the commissioning. He said it is his responsibility, and that of all Coast Guard members, to ensure the service has an inclusive environment that encourages each member to reach their full potential.

“Our service is the strongest when we are comprised of individuals of diverse backgrounds, diverse opinions, diverse experiences, culturally and professionally,” he said. “When we best reflect the population that we serve, we will be the best Coast Guard that we can absolutely be.”

McShan was born in Alabama, growing up in Tuscaloosa. Schultz joked that McShan's family members wanted to make certain that the ceremony would conclude before the Alabama Crimson Tide took on the Arkansas Razorbacks that evening.

“When I heard that, I said I’m going with my long speech,” he said.

McShan joined the Coast Guard in 1979.

“She served over two decades with great devotion and is remembered as an exemplary leader and professional,” according to material presented at the event. She served as the senior instructor of the Chief Petty Officer Academy in New London, Conn., and at the time of her death was slated to become the chief of the Yeoman “A” School.

Commanding officer Lt. Brian Field formally took command of the cutter, although Schultz said he and other crew members have been working on preparing the vessel for much of this year.

Field’s most recent assignment was on board the USCG Cutter Forward, based in Portsmouth, Va.

The cutter’s missions will include search and rescue and law enforcement, including fishing regulations, migrant interdiction, and drug enforcement. The new class replaces the 110-foot Island-class cutters.

The Angela McShan is the 35th commissioned cutter of the class, the first to carry the name Angela McShan and the third to be stationed at Cape May. It is capable of speeds of more than 28 knots and has a range of 2,500 nautical miles.

Speakers said the vessel is as seaworthy as it is possible to make it.

Among the speakers was U.S. Rep. Donald Norcross (D-1st), while state Assemblymen R. Bruce Land and Matthew Milam (also D-1st) were in attendance, as was Cape May Mayor Clarence Lear.

This morning, I joined the @USCG in Cape May in commissioning #USCG Cutter Angela McShan.

With the naming of this vessel, we honor Master Chief McShan’s legacy & thank her family for their support & sacrifice. pic.twitter.com/Gzl0pJPmQN

Coast Guard Training Center Cape May is the national basic training center for the Coast Guard, through which all enlisted personnel passes as recruits. It is also home to a small boat station and homeport to several cutters.