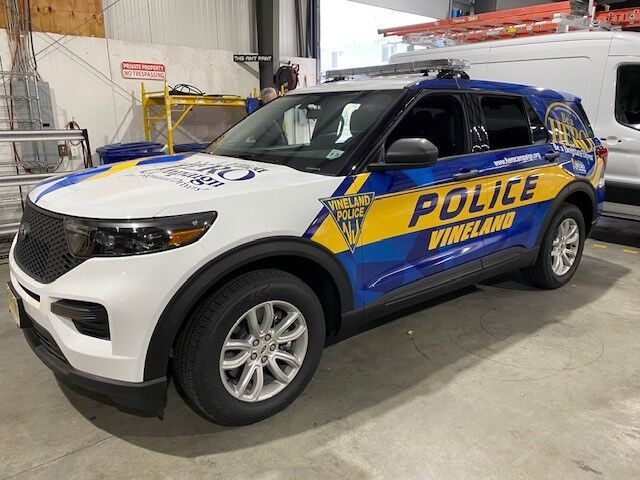 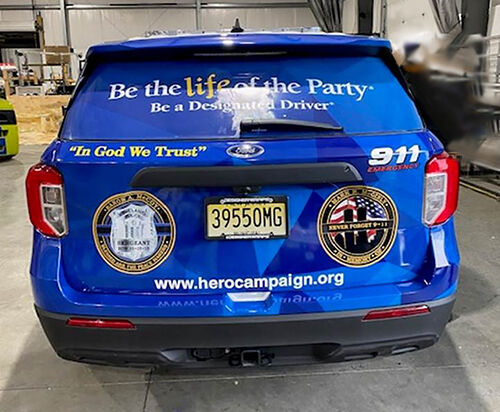 The Vineland Police Department has announced its partnership with a regional drunk driving prevention organization by unveiling a new HERO Patrol Car to promote the use of safe and sober designated drivers.

The department’s new Ford Explorer will be a “rolling billboard” for the John R. Elliott HERO Campaign for Designated Drivers, named in memory of Navy Ensign John Elliott of Egg Harbor Township, who was killed in a collision with a drunk driver near Woodstown in July 2000.

The bright blue and yellow HERO Campaign logo and message – “Be a HERO. Be a Designated Driver” – are displayed on the car, making Vineland the eighth city to adopt the HERO Campaign with a DUI prevention vehicle. Atlantic City, Evesham Township, Linwood, Lower Township, Middle Township, Ocean City, and Sea Isle City also have HERO cruisers currently in service (Longport and Pleasantville are pending, among others).

Vineland’s HERO cruiser will be highly visible in the community as officers drive it on traffic duty, to special events, and to area schools. With decals on the back, Vineland’s HERO cruiser honors the memory of two fallen heroes: Vineland Police Sergeant Baron McCoy, who died in 2015; and Mark R. McGinly, who died in the terrorist attack of the Twin Towers on September 11, 2001.

Mark’s parents, William and Patricia McGinly, donated the HERO wrap for the Vineland police cruiser. They are close friends of Bill and Muriel Elliott, founders of the HERO Campaign. It was the McGinlys’ idea to sponsor a HERO cruiser here, as Patricia’s family, the Ottingers, are from Vineland, where Mark was laid to rest. Her brother is the late Vineland school superintendent Charles “Chalky” Ottinger.

Sgt. McCoy was designated by the VPD to be memorialized alongside the late McGinly and Elliott men as inspirational figures in the community. McCoy, who was 50 when he succumbed to cancer, served as a member of the Vineland Police Department Traffic Safety Unit, as a police chaplain and as a pastor in his church.

“We are proud to partner with the HERO Campaign in our common commitment to preventing deaths and injuries resulting from drinking and driving,” said Vineland Mayor Anthony Fanucci. “The more we can engage the community by encouraging safe driving and good decision making, the more lives we will save and injuries we will prevent. Thank you to the McGinly family for sponsoring the beautiful wrap and Councilman Paul Spinelli for presenting the opportunity and seeing it through the process. The Vineland HERO car will help remind our residents not to drink and drive, and to plan ahead by having a designated driver ready to get everyone home safely.”

HERO Campaign Chairman Bill Elliott, John’s father, thanked the McGinlys, Mayor Fanucci, and Captain Lene Bowers (who oversees the VPD’s Community Policing Unit) for making the HERO cruiser a reality. Bill McGinly added, “We are proud to sponsor something so beautiful and important, and honored by the tribute to the memories of our son, John Elliott and Sgt. McCoy.” His wife Patricia added, “It brings tears of joy and sadness, knowing that their legacies are helping to save lives.”