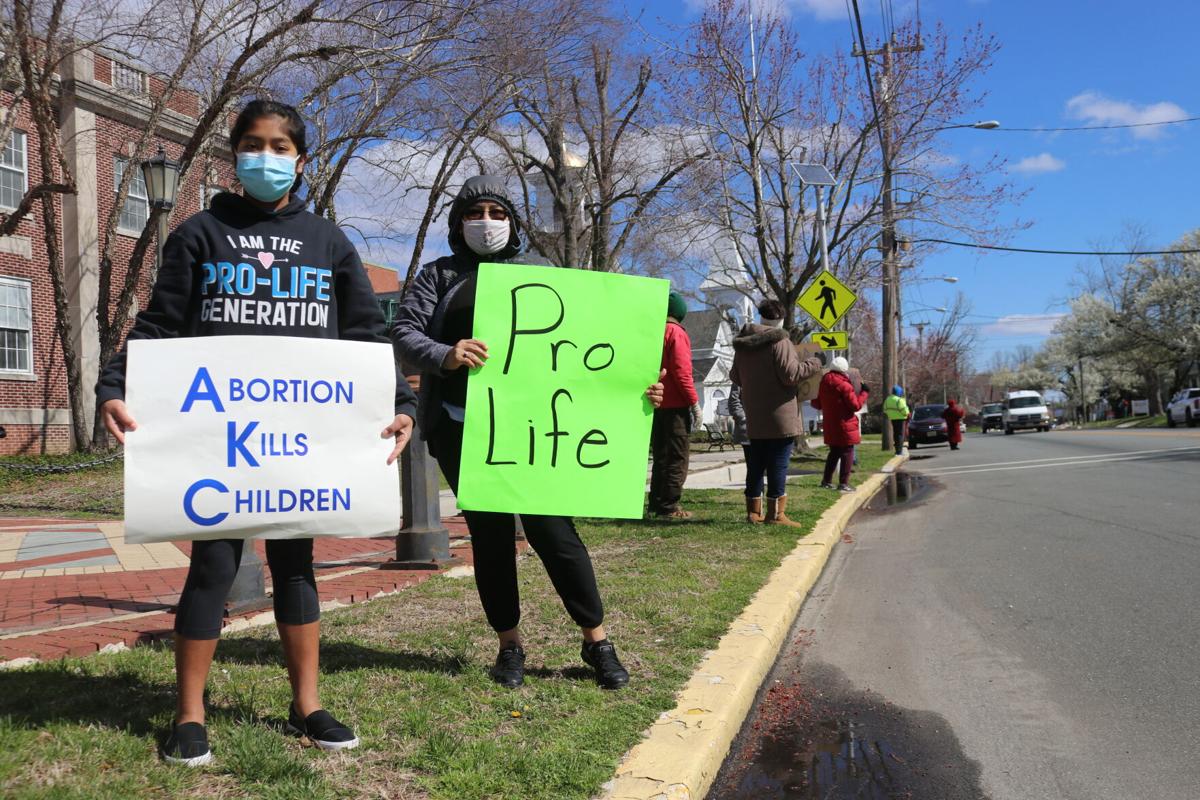 Danna Ramirez, left, who lives in Sea Isle City and attends school in Ocean City, attended the Good Friday vigil against abortion with her mother, Aridahi Ramirez, because she said she wants to protect the most innocent. 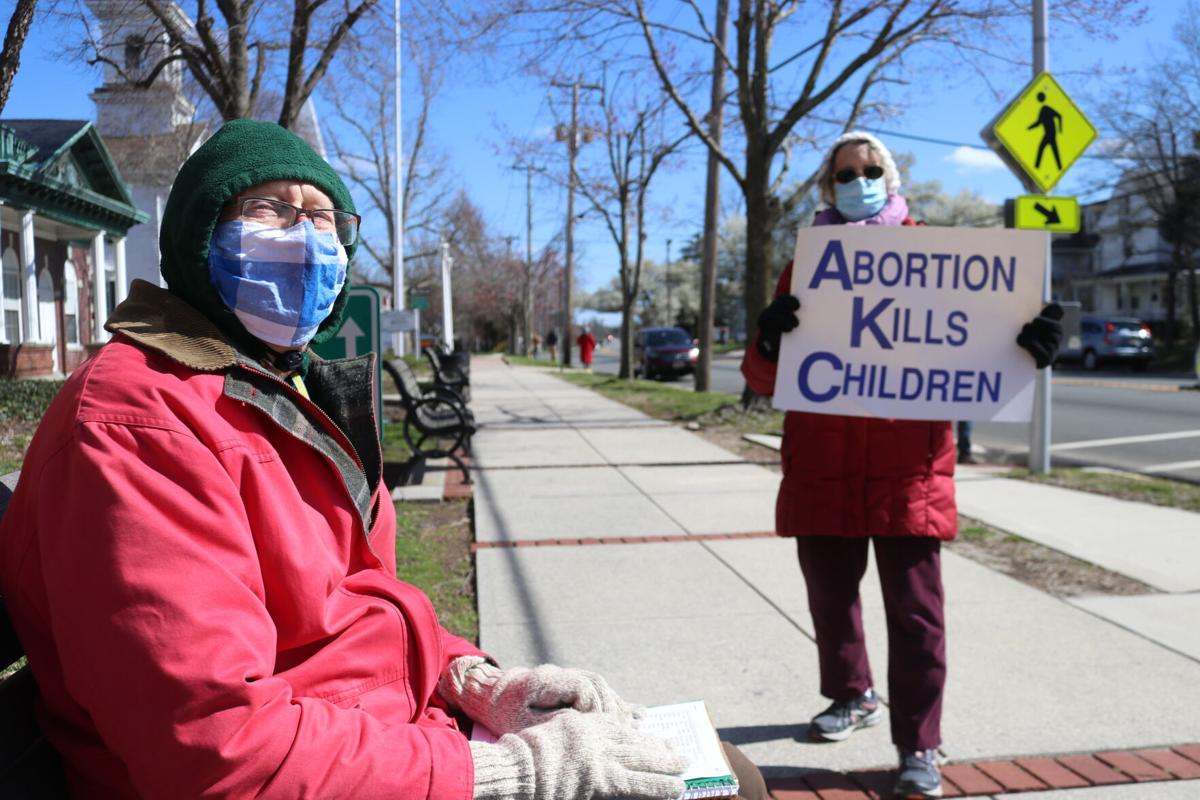 Steve Atzert, left, one of the organizers of the April 2 event, in Court House, said stopping the Reproductive Freedom Act in New Jersey is a priority for the group.

COURT HOUSE – On a sunny but cold Good Friday (April 2), more than 30 people gathered along Route 9 to demonstrate their opposition to abortion.

They gathered under the new, white flowers of pear trees and the still-bare poplars, bundled against a spring chill, and holding signs that read “Pray to End Abortion” and “Abortion Kills Children.”

The event was organized by Cape May County Right to Life.

Alvin Westerland, the organization's president, said they sought to raise awareness and advocate for abortion restrictions. He said there are close to 3,000 abortions each day in the U.S., a procedure he and others in the group see as killing a child before birth.

“The trouble with this country is people care more about animals than they do about babies,” he said.

Data from the Centers for Disease Control and Prevention (CDC) indicates there were 619,591 legally induced abortions in 2018, a number that has been decreasing over the past decade.

For those gathered along Route 9, one is too many.

Danna Ramirez, an eighth grader, who lives in Sea Isle City, said she came to the event with her mother to stand up for babies who cannot speak for themselves.

She was standing in front of the Cape May County Superior Courthouse, wearing a sweatshirt that read “I Am The Pro-Life Generation.”

“I came here to let people know what happens to the innocents of our kind,” she said.

Most years, members of the organization travel to Washington to participate in the national March for Life. In January, the event went virtual because of the pandemic, so local members gathered in the historic county seat instead.

They held the same signs along the roadway Jan. 29. The April event was warmer, but not as much warmer as they expected, with a steady breeze and temperatures remaining in the 30s.

According to Steve Atzert, one of the event’s organizers, a member suggested holding additional vigils after the January gathering.

“He said, ‘We should do this more often. We don’t have to just do this once a year,'” Atzert said.

He added that those gathered received mostly friendly honks from the passing cars. A few drivers offered more pointed criticisms.

You won’t have everyone on your side, Atzert said. He paraphrased Martin Luther King, who said not to be afraid to do what’s right.

The group included members from multiple local churches, he said.

In addition to raising awareness, he said a priority for the group is to block the passage of the Reproductive Freedom Act in New Jersey, which, he said, would define a fetus as specifically not a citizen.

“Humans have human babies. Unless some magic happens in the birth canal to make him a person, that’s a person before he leaves the womb,” Atzert said.

Proponents of the bill, including Gov. Phil Murphy, said it would protect women’s rights to reproductive health care, including abortion and birth control, and remove restrictions.

“As access to health care and the right to choose are under attack at the federal level, we will support, defend, and protect reproductive rights here, in New Jersey,” said Murphy, in a prepared statement on the issue, in October 2020. “The Reproductive Freedom Act will remove barriers to reproductive health, as well as expand access to contraception, while reaffirming choice. Together, we stand unwavering in our commitment to work towards reproductive freedom for all New Jerseyans.”

Further, Atzert said, the group wants to see abortion banned in New Jersey and at the federal level.

In 1973, the Supreme Court ruled that the Constitution protected a woman’s right to choose an abortion. Atzert believes that ruling would not be upheld if it were found that someone is a citizen before birth, which, he argues, is established by the 14th Amendment.

The group spread out on either side of Route 9, staying for about an hour before heading back to their cars.

Linda Allen, another participant, said towns in Texas and elsewhere are declaring themselves sanctuary cities for the unborn. She suggested advocating for that locally.

“Cape May County is the only county in New Jersey that does not have an abortion clinic. We want to keep it that way,” said Westerland.

While there is no abortion provider listed in Cape May County on the National Abortion Federation’s website, prochoice.org, several other counties in the state do not appear to have a provider listed, either.

Another website shows 41 clinics in New Jersey and 67 crisis pregnancy centers, which seek to persuade women against having an abortion.

New Jersey is among the states with the least restrictions on abortion in the nation. The state does not impose waiting periods, require parental involvement, or limit the use of public funds for abortions.